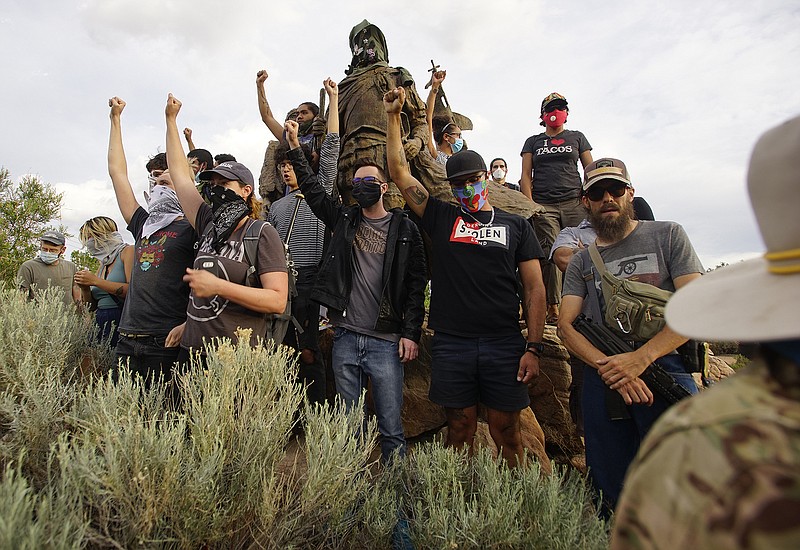 Demonstrators climb the statue of Don Juan de Onate in Old Town in Albuquerque, N.M., while an armed member of the New Mexico Civil Guard stands by during a protest calling for the removal of the likeness of the controversial New Mexico explorer Monday, June 15, 2020. (Adolphe Pierre-Louis/The Albuquerque Journal via AP)

ALBUQUERQUE, N.M. -- A growing number of cities across the U.S. are creating committees and task force panels aimed at discussing racial tensions.

From Albuquerque, N.M., to Clemson, S.C., towns and municipalities recently have formed committees to deliberate the future of debated Confederate and Spanish colonial monuments or address what some believe to be systemic racism in police departments.

In some communities, religious leaders are forming their own committees to devote attention to healing racism. Phoenix Roman Catholic Bishop Thomas Olmsted announced in July the formation of the Racial Healing and Reconciliation Commission in the Diocese of Phoenix to identify "where bias and prejudice cause injustice" and offer recommendations.

The mostly volunteer committees seek to have honest discussions about their cities' past around race and vow to propose ideas to create more inclusive environments.

In Albuquerque, the Race, History & Healing Project is trying to determine what the city should do with a statue of a Spanish conquistador on the grounds of the Albuquerque Museum. Some Native Americans find the image offensive while Hispanic residents who trace their families' lineage to early Spanish settlers say the statue is a reminder of their own struggles.

But in June, a demonstration against the statue turned violent after a Hispanic defender shot a demonstrator. The protester survived, but the city removed the statue and put it in storage.

This month, the Town Council of Fairfax, Calif., formed a Racial Equity and Social Justice Committee to focus on "dismantling and eradicating systemic and individual racism, bigotry, and discrimination" in the town of 7,500 people. Fairfax police will take part in planned Zoom meetings.

Meanwhile, city councilors in Bremerton, Wash., voted 5-2 in July to form a similar committee to address racial inequities in the city of 41,235 people. The committee's creation was praised by Black and Asian American advocates. But at least one city councilor, Pat Sullivan, criticized its formation as exclusionary.

"If I saw a gang, and most gangs are Hispanic or African American, if I saw a gang come and spray paint on the side of my neighbor's house, which happened like five years ago, am I going to feel comfortable to come to a race equity advisory committee because I'm white and they're a different color?" Sullivan said, according to the Kitsap Sun.

Michelle Otero, another former Albuquerque poet laureate, has led some discussions as a facilitator. She described the gatherings as "very intense" as participants work to see the world through other people's eyes. And she said everyone may not agree on what to do with the disputed Spanish conquistador statue, but they are talking to each other.

"This conversation is 400 years in the making," Otero said. "We are still living with the consequences of the actions by our ancestors." 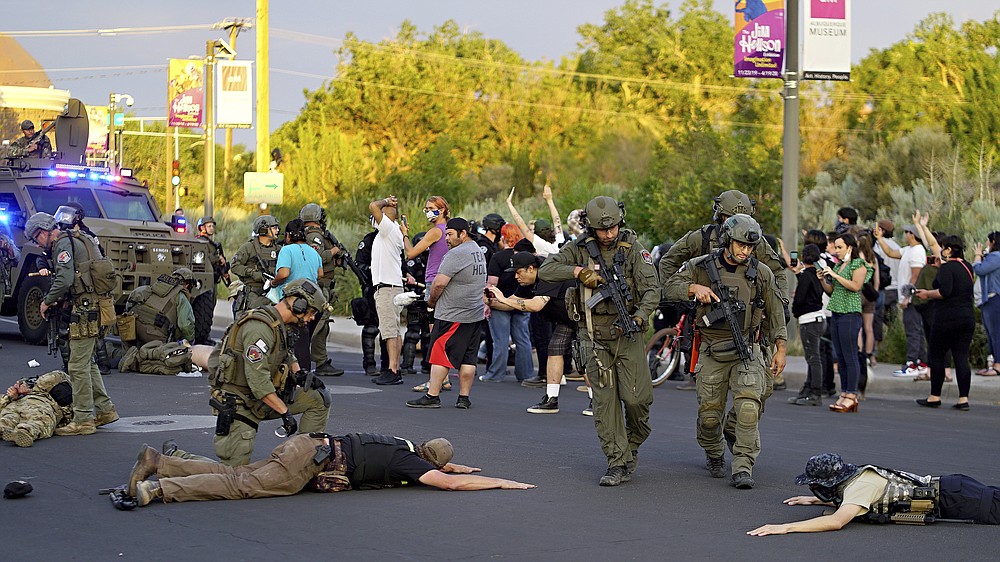 Albuquerque police detain members of the New Mexico Civil Guard, an armed civilian group, Monday, June 15, 2020, in Albuquerque, N.M. A confrontation erupted between protesters and a group of armed men who were trying to protect a statue of Spanish conquerer Juan de Oñate before protesters wrapped a chain around it and began tugging on it while chanting: “Tear it down.” One protester repeatedly swung a pickax at the base of the statue. Moments later a few gunshots could be heard down the street and people started yelling that someone had been shot. (Adolphe Pierre-Louis/The Albuquerque Journal via AP) 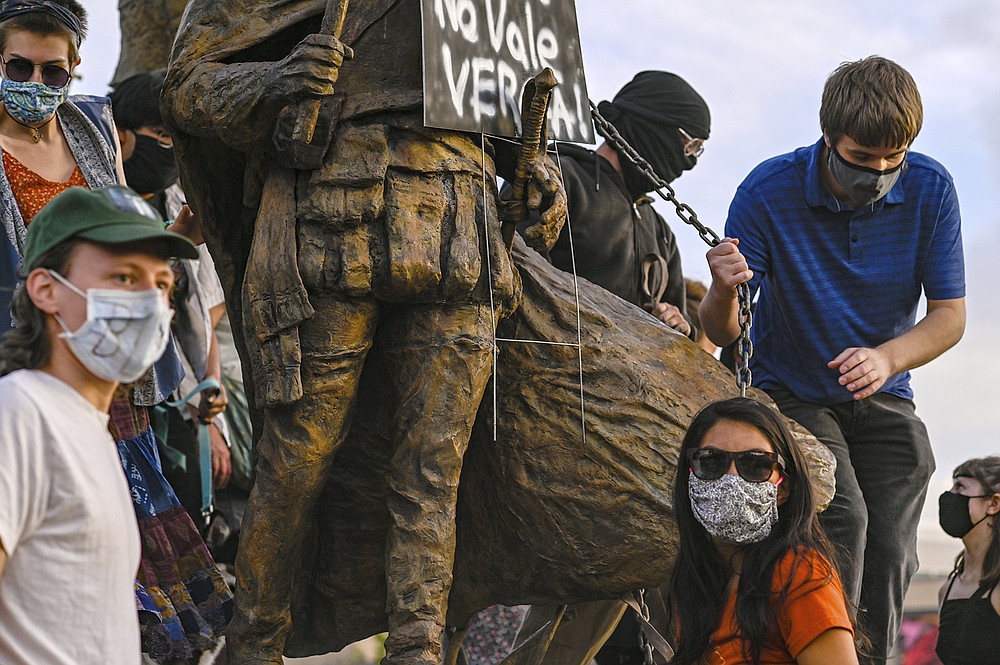 Protesters attach a chain to a statue of Spanish conquerer Juan de Oñate in Albuquerque, N.M., Monday, June 15, 2020. One man was shot during an exchange between protesters and armed members of the New Mexico Civil Guard, a civilian group trying to protect the monument. (Anthony Jackson/The Albuquerque Journal via AP)
ADVERTISEMENT