For newspaper, the world is local 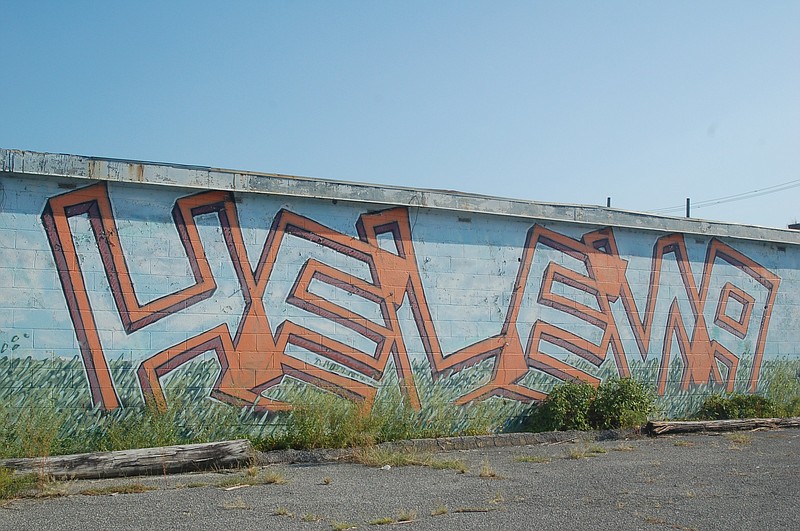 FILE - A mural covers a wall in downtown Helena-West Helena in September 2020.

HELENA-WEST HELENA -- Hard on the banks of the Mississippi River, the World still turns, one page at a time.

Founded in 1871, the Helena World is one of Arkansas' oldest newspapers.

It met print journalism's version of the grim reaper on Sept. 6, 2019, when GateHouse Media, its out-of-state corporate owner, closed the newspaper. An obituary, however, would have been premature.

That same day, Chuck Davis and Andrew Bagley announced that they had bought the World, becoming its first local owners since 1981. Publication resumed 12 days later.

Davis, the majority owner, is retired. Bagley, a freelance writer for the old World for several years, teaches American history and government at Phillips Community College of the University of Arkansas. Both are co-publishers of the newspaper; Bagley also is its editor and chief news and sports reporter.

"I was stringing for it, and it was clear that it wasn't doing well," Bagley, a native of nearby Barton, said. "Circulation was going down as fast as you could breathe."

When GateHouse announced its plans to close the World, Bagley and Davis had an idea: "Let's try and get it."

"I knew that if it was run right, the paper could make some money," Bagley said.

GateHouse was receptive, which Bagley said was surprising, given that the company had made no effort to sell newspapers it closed in Arkadelphia, Hope, Prescott and other Arkansas towns in recent years.

The closing happened so quickly, Davis and Bagley said they had no opportunity to look at the World's books, to judge its profitability or lack thereof. (GateHouse closed the Stuttgart Daily Leader the same day, just four weeks after announcing its $1.4 billion purchase of the Gannett newspaper chain.)

Under terms of the sale, neither side could disclose the price he helped pay for the World, but Davis said, "It was a very low price. It's not how you sell, but how you buy. You can make a little money off anything if you do it right."

For most of its 149 years, the newspaper was the Daily World, published every day but Saturday, but it moved to twice-weekly in about 2005.

The World had a paid circulation of 625 when it closed.

Under the ownership of Davis and Bagley, the World has shifted to weekly publication, with at least two sections and at least a dozen pages for each edition.

The two essentially bought just the paper's name. Its printing press had been dismantled years ago; its longtime headquarters on York Street had been vacated by GateHouse in early 2019.

"We didn't assume any of the debts, and we didn't get a subscription list," Bagley said. "We started almost from scratch. In the first week, we got about 300 subscribers."

For a recent issue, the World sent out 416 copies to subscribers and had 422 single-copy sales, Bagley said. Circulation has topped 900 in recent weeks, boosted by the return of high school football.

Single-copy sales spike when "there's a piece of juicy crime news," Bagley said. A goal is 1,000 copies a week, through subscriptions ($100 a year) and single-copy sales at ($1 each).

The paper is printed 118 miles away, in Monticello, by Tom White, publisher of the Advance-Monticellonian, and hauled to Helena-West Helena each Tuesday for next-day mail delivery. (Newspaper carriers everywhere have nearly gone the way of the dodo bird.)

The entire newsroom of the World, for now, is a room of about 150 square feet inside a century-old building on Rightor Street, between the Mississippi River levee and the Cherry Street Historic District.

"It gets cozy in here" when all three work stations are occupied by Bagley, bookkeeper Nicole Lappin, and freelance writer Philly Rains, Bagley said. Another freelancer, Terri Ann Hall, reports from Marvell, 20 miles to the east. Davis and Bagley will have a new editor starting Nov. 1, which will free Bagley to concentrate on selling ads.

In 2005, the Daily World sued a circuit judge for barring the newspaper from reporting on testimony given in open court during a hearing on the firing of a chief of police. The newspaper argued that the decision was an unconstitutional prior restraint on the press, in violation of the 1st Amendment.

The court agreed, calling the decision a "plain, manifest, clear and gross abuse of discretion."

A woman recently wrote the newspaper, asking for similar "eyes and ears" work: "Dear sir: You are our only source of Arkansas news. Direct TV does not allow [Arkansas] TV stations. Could you please print a list of people running for office? What they stand for & what 'party' they are with? Also would appreciate any Arkansas news you can print!"

"People will respond to that effort, covering local news," Davis said, adding that he'd never before thought of owning a newspaper to add to an extensive career in business that includes import trade and 10 years with the federal Small Business Administration.

The World has been filled with local news the past year, with Bagley ever present at meetings of the Quorum Court, the City Council and school boards, even if that presence has been digital the past six months because of the coronavirus pandemic.

A "special report" in the March 11 edition chronicled the woes of the Humane Society of the Delta in dealing with an influx of dogs that had been trained to fight or rescued after being injured in dog fights. An accompanying editorial called for a city ordinance requiring pets to be spayed or neutered and asked for donations to the shelter.

In an editorial June 3, the World called on Consolidated Grain and Barge, a global agriculture commodities company with operations in the Helena Harbor, to be a better corporate citizen.

The U.S. Army Corps of Engineers, according to the editorial, had found that the weight of CGB grain bins had damaged part of a flood wall protecting the city. While federal money would pay for the repairs, CGB had failed to acknowledge the problems, the newspaper said.

"I'm most proud of the local copy we've had," Bagley said. "We don't have a wire service and we don't run a lot of 'canned' material. There's good news, bad news and ugly news out there. If we're not telling the stories, why do we exist?"

The newspaper's website has a paywall, meaning it won't give away its content. "We work really hard to produce a newspaper and we don't want to undermine that work," Bagley said. A Facebook page and an Instagram account are updated every day, aimed at luring subscribers and advertisers.

Recent special sections, such as for basketball and football previews and on the county's Farm Family of the Year, have been profitable and popular, Bagley said.

But advertising and circulation bonanzas that would have come from the Tri-County Fair and the city's famed Arkansas Blues and Heritage Festival vanished when the pandemic forced the cancellation of those events.

"We had a really sharp dip, mainly in advertising," Bagley said. "People were staying home, not going to any businesses, not picking up the paper in stores. At the same time, some of those people wound up starting subscriptions because they weren't getting out. It has all pretty much stabilized."

The newspaper received $13,000 through the federal Paycheck Protection Program to help pay salaries through the pandemic and a $3,000 state grant to pay for other pandemic-related expenses. The money, Bagley said, was a "critical buffer" for the newspaper.

GateHouse had no interest in selling the World's former office building last fall; it had a change of heart this spring and sold it for $15,000.

But the building, vacated by GateHouse when the air conditioning went out, had extensive wind and water damage from a leaky roof that only got worse during thunderstorms over the Easter weekend.

"There might as well not have been a roof," Davis said. "You can buy buildings here cheap, but you've got to put a lot into them."

Davis should know: He invested some $700,000 buying and renovating two buildings, at 403-405 Cherry St., constructed in about 1890. He leases out the downstairs to businesses and lives upstairs with his wife Cindy. Three upstairs studio apartments make up The Rising Sun bed-and-breakfast.

Fifty-five gallon drums of printer's ink were still in the back of the World's building where the press had been years ago. Rolls of newsprint and stacks of past editions of the newspaper had gotten wet and moldy.

With the new roof and heating-and-cooling system, an extensive cleaning and fresh paint, all done by local contractors, Davis and Bagley hope to move into the newly renovated building before the end of the year, adding another chapter to the Lazarus-like rise of the World.

"This has been the funnest job I've ever had," Bagley said. "It's not lucrative, but it's a blast." 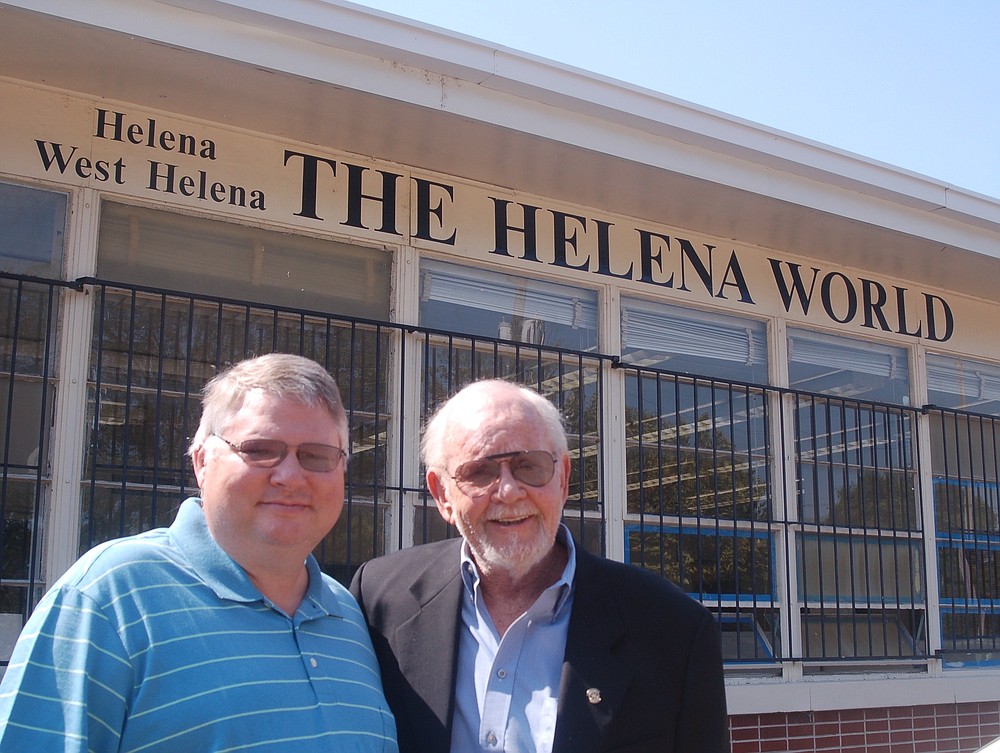 Andrew Bagley on the left; Chuck Davis on the right, bought the Helena World newspaper on Sept. 6, 2019, when GateHouse Media, its out-of-state corporate owner, closed it, making them the paper's first local owners since 1981. The Helena World was founded in 1871, and is one of Arkansas oldest newspapers. Photo by Stephan Steed
ADVERTISEMENT