Momentary’s new exhibit — ‘Nick Cave: Until’ — consists of several works all designed to make one think about social justice, and the lack of it by Philip Martin | September 20, 2020 at 3:10 a.m. 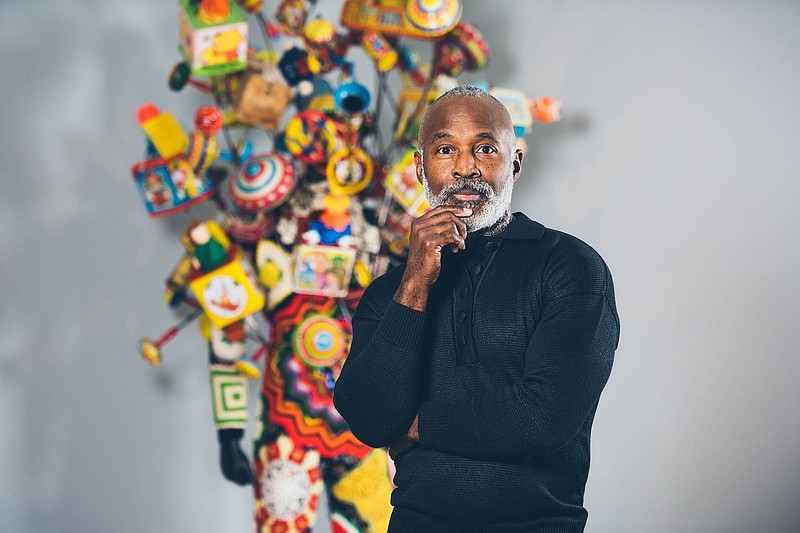 Artist Nick Cave trained with the Alvin Ailey American Dance Theater. Now an artist and performance artist well known for his Soundsuits, his latest experimental exhibition is at the Momentary. (Ironside Photography/courtesy of Crystal Bridges Museum of American Art)

BENTONVILLE — There is freedom in anonymity.

Artist Nick Cave understands that by submerging your presented self — your gender, racial and generational and class identities — in a costume that obliterates all these observable details, you become less inhibited and more inscrutable. To the eyes of others, you cease to be your traits.

He was thinking of Rodney King, who in 1991 was beaten before cameras by Los Angeles police officers after a high-speed chase. The sirens and helicopters woke up a man who lived nearby, who had the month before acquired a video camera.

When he got out of bed to see what the commotion was about, he grabbed his new toy, stood out on his balcony, and filmed King's arrest. When no one at the police department was interested in viewing his footage, he took it to a local television station, which cut the first 10 blurry seconds of the nine-minute tape and aired it.

Everyone saw four cops beat King — who had taser wires attached to his body — with batons and kick him with their boots while perhaps a dozen others stood around kibitzing. Everyone saw them hit him at least 56 times with what was, in LAPD parlance, "power strokes."

It was horrible. Even police chief Daryl Gates — a man infamous for his hard-line paramilitary approach to policing — said he wanted his men to stand trial for the beating.

They did. And their acquittal touched off five days of rioting in Los Angeles.

When King and his attorney filed suit against the city, they wanted to downplay the racial angle. A lot of people remember King pleading during the riots, asking if we could all just get along. Fewer people remember that he also said that, as a Black man, he was constantly intimidated by the police, who he did not believe had his interests in mind. King said the police were a family and he was from another family.

Cave — though he is sometimes mistaken for the Australian singer-songwriter-band leader of the same name — is a Black man, and so also part of that other family. In the wake of the King verdict, he felt the sting of being discarded, of loving a country that did not love him back. He found a lonely twig, discarded, unnoticed — a thing totally without value. You could say he identified with it. He took it back to his studio.

He collected other sticks and twigs and fashioned them into a wearable sculpture he called a Soundsuit because of the noises the sticks produced when he climbed into it and began to dance. (Cave was trained as a dancer; he studied at the Alvin Ailey American Dance Theater.)

After that, Cave went on to create more than 500 other Soundsuits, sewing together sisal, dyed human hair, beads, plastic buttons, wire, feathers, toys, sequins, tchotchkes and other found and ordinary objects into elaborate and strange bubbles into which he — or anybody else — might climb and disappear. Most of them are bright, exuberant and funny, as reminiscent of sport teams mascots like the Philadelphia Flyers' Gritty as they are of African ceremonial costumes or haute couture.

In art circles, Cave is well-known — famous — for these Soundsuits. They are an important part of his practice as a performance artist. You could say they are one of his identities — the identity that obscures the others — and that they level the field by presenting the audience with something unique, new and possibly terrifying, something about which they could hold no pre-existing expectations. Something with which they will have to engage if they are going to even begin to understand.

You should not be disappointed that there are no Soundsuits on display in glass cases or anywhere else in Cave's exhibition at the Momentary, where you can climb into his latest work, the experiential "Until." This might frustrate some people, particularly those who know Cave as an art world figure and like to tick off the famous and important works to which they have been proximate.

But there are probably far fewer of those people than there are people who have a vague notion that Australian pop singer Nick Cave has some kind of art show at the Momentary.

About the best I can do in describing "Until," which further elaborates on Cave's recurrent themes of social justice and the ways we confront (or fail to confront) the "isms" that divide humanity into ruthlessly competing tribes (other families), is to say it is like a Soundsuit turned inside out. That the exhibit takes its title from the first principle "innocent until proven guilty" and its counter-thesis "guilty until proven innocent," is like climbing into the artist's head.

Here we can walk through Cave's subconscious, experience the irrational details that swarm up unbidden — handguns amid kitschy lawn ornaments like spinners, repurposed lawn jockeys poised to snag dreams from the ether of Cave's imagined heaven, where (he hopes) there is no racism.

It is beautiful and weird and untranslatable into words. Cave's mode is more evocative than provocative; his images don't directly challenge or provoke so much as bemuse and mystify. To walk through these installations is to tour an alien civilization with a dream logic markedly different from our familiar practical world. Cave's interior has been realized in these spaces, and the Momentary space itself — an old cheese factory — has become an integral part of his cosmos.

While "Until" has been erected before — in 2017 at MASSMoCA (the Massachusetts Museum of Contemporary Art) in North Adams, Mass., and in 2018 at Carriageworks in Sydney — its character is necessarily different from what it might have been were it it installed in a hermetic shoe box of a gallery.

While I've only seen photographs of the other "Until" iterations, it would seem to have been drastically adapted if not completely re-imagined for the Momentary's less regular spaces. Whether or not "Until" benefits from the way the architecture directs both installation and perception is hard to say. But the Momentary certainly benefits from the timeliness and scale of Cave's new work, which seamlessly incorporates the industrial multi-purpose feel of the building.

You can sit and have lunch at a counter overlooking Cave's "Kinetic Spinner Forest," which consists of about 16,000 shiny metallic mobiles of various hues, glinting as they spin in and out of focus.

It's playful and ambiguous — one's initial reaction to "Kinetic Spinner Forest" is likely to be an almost infantile delight. You might want to reach out and grasp the shimmering objects (please don't touch the art) to check their weight and quality. Literally dazzling, it might take a moment before the embedded terror shows itself.

Next door, the ceiling rises and the walls are covered by "Beaded Cliff Wall," an installation of millions of barrel-shaped plastic pony beads of various colors strung by hand on shoelaces by Cave and 12 assistants over the course of 18 months. Positioned in the middle of the room is "Crystal Cloudscape," a raised installation of considerable weight (reportedly more than five tons) that might be regarded as "Until's" centerpiece.

"Cloudscape," when viewed from ground level, appears to be a cheeky approximation of a heavenly realm, with banks of angled chandeliers casting beneficent vanilla-colored light on observers.

But climb one of the industrial rolling ladders and peer over the world atop — a crowded visual cacophony of repurposed objects, including dream-catching lawn jockeys. These objects were sourced from flea markets and thrift stores by Cave and his artistic collaborator and life partner Bob Faust, and can be seen as parodic of such works as Hieronymus Bosch's "The Garden of Earthly Delights." Like a lot of work by the Dutch masters, there's a sense of something turned and rotting in his jumbled images.

"Flow/Blow," a double bank of 14 tilt drum fans rippling a curtain of shimmering Mylar filaments, is sequestered in its own dim room, lending it a monstrous quality as it hums away. It feels implacable, not unlike one of those low-budget monsters from drive-in horror movies of the '50s and early '60s. You might want to keep a little distance from this shape-shifting and breathing appliance. (Once again, you're not supposed to touch the art; but is it all right to let the art touch you?)

Elsewhere Cave has mounted a window from MASSMoCA through which a hawk crashed while they were setting up the exhibit there. For hours the bird flew around the gallery, and after he escaped Cave took down the window.

There is both wit and dread in "Until," a sardonic undertone that reveals itself gradually. Cave began the project as a site-built installation for MASSMoCA, but its roots are in the shooting death of Black teenager Michael Brown in Ferguson, Mo., less than 100 miles from where the artist was born in Fulton, Mo., in 1959. Like the beating of Rodney King, Brown's killing set off a wave of riots, as once again the police and the community being policed were revealed as different families.

Outside a Soundsuit, Cave felt his Blackness made him a target. Outside the gallery space, Blackness becomes his signal identity, the one perceived instantly and most directly by strangers. His Soundsuits provide a way for Cave to remove the artist from the equation, forcing the audience to consider the work without thinking much about the person who created it.

"Until" reverses this strategy, putting us deep in the belly of the beast to feel the discomfiture of the marginalized. Here he's not trying to erase the various identities of the artist but to make us all complicit in both the art-making process and the society we have built.

"How do I create art that is of service?" Cave asked last week in a video call designed to preview the exhibit for journalists. Normally that's the sort of remark that's dismissed as simply filler, the kind of thing one says when one wants to project humility and seem less ego-driven than one suspects oneself of being.

But in this instance — this moment — as the United States goes through yet another season of racial reckoning, allowing us to share his specific head space does feel generous.

The best way to receive "Until" is as an invitation to empathy. Cave is inviting us inside, showing us the world as it seems to him. Things can be both ordinary and freighted with deep meaning; there is nothing that does not have some psychic heft. There are no innocent symbols or gestures and — even in heaven — there might be decay and ruin.

While there is freedom in anonymity, an anonymous life is no life at all. Names should be said, injustices should be called out, platitudes and euphemisms should be understood as the unhelpful prettifiers that they are. You can't live your life in a Soundsuit, allowing the observer to project whatever wishful notion they might harbor upon your form.

People talk a lot about artists growing. Usually that's just code for becoming bored with the old work and wanting to try something new. But here we see actual and inarguable progress.

A Soundsuit is a form of armor, a shell to protect you from the world. "Until" is a kind of surrender, an offering of the artist's neck. It's a brave thing, and all the braver for being so delectably strange, so other than the usual cant.

We all contain multitudes; on the inside, we are all warm and vulnerable.