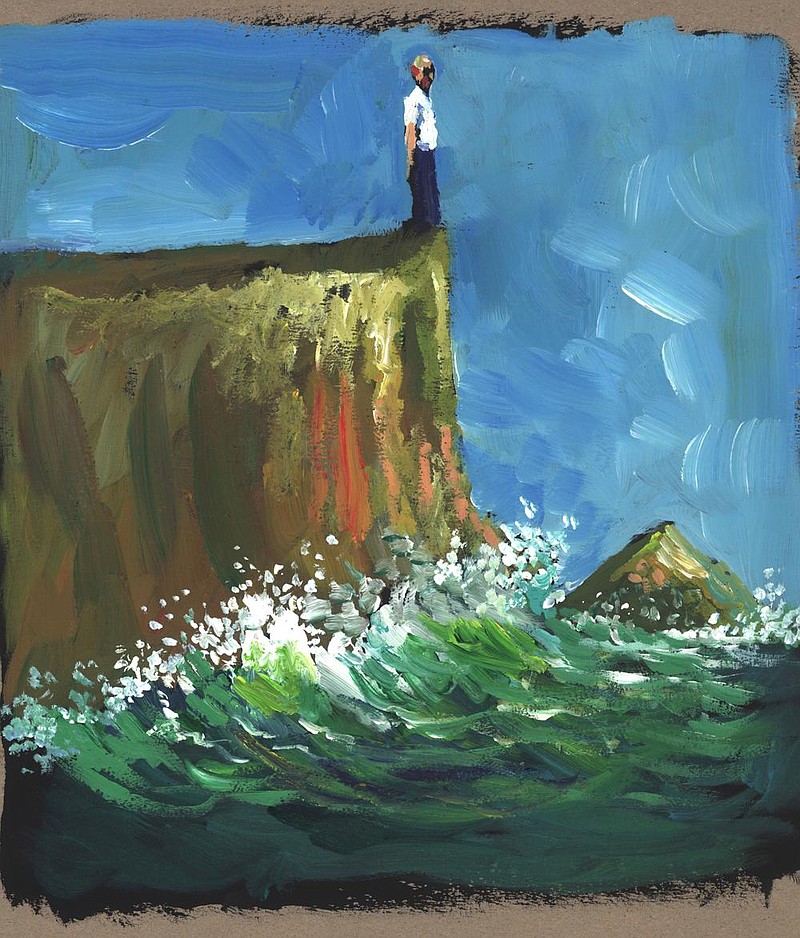 I shouldn't have made a road trip on that August Saturday two years ago. I had outpatient surgery just the day before and was taking all the painkillers the doctor allowed. But I had been asked to be a pallbearer at the funeral of a close family friend, Dr. Ben Elrod, and wasn't about to miss the service at the church I attended as a boy, First Baptist Church of Arkadelphia.

Elrod, a Rison native, served as president of three colleges--one in Indiana, one in Kentucky, and Ouachita Baptist University in Arkansas. He also was president of Arkansas' Independent Colleges and Universities, a job I later held. I leaned on Elrod heavily for advice during my five years at AICU and later wrote a small book about his life and leadership principles.

My son drove me to Arkadelphia that day. My memory is a bit fuzzy due to the painkillers, but the talk I remember best was given by another old family friend, Dr. Joe Nix, a former Ouachita professor who became a stalwart in the early days of the environmental movement in Arkansas.

Nix didn't talk about higher education or leadership. He talked about a river and the many days he and Elrod had spent on that river.

"Every man should have a river," Nix said.

I grew up a couple of blocks from the Ouachita River, several miles downstream from where the Caddo empties into it. It's where I waded, fished from the bank, and skipped rocks. I would watch it flow south and marvel that steamboats had once hauled cotton all the way from Arkadelphia to New Orleans.

This is also the site of the seven-mile-long Old River, which historically linked

these streams to the Mississippi River. Traffic could then continue all the way to New Orleans and the Gulf of Mexico.

The U.S. Army Corps of Engineers has long since altered the flow of the water with massive pumps and levees. Left to its own devices, the Mississippi likely would have already changed its course into the Atchafalaya, stranding the Port of New Orleans on what essentially would have become a large oxbow lake.

What's known as the Ouachita-Black Rivers Navigation Project began in 1902. In 1924, construction was completed on a system of six locks and dams. Outdated locks were later replaced. There are now four locks and dams on the waterway, providing a minimum 9-foot-deep and 100-foot-wide navigation channel for barge traffic from the Red River north to Camden.

In September 1991, the Arkansas Times published an essay about the Ouachita by Arkansas writer Charles Portis, author of "True Grit" and other acclaimed novels.

"It came as a great surprise to me lately when I learned that there was regular steamboat service on this modest green river, as late as the 1930s, and as far up as Camden," Portis wrote. "I am not speaking of modern replicas or party barges, rented out for brief excursions, but of genuine working steamboats, with big paddle wheels at the rear, carrying bales of cotton down to New Orleans and bringing bananas and sacks of sugar back upstream, along with paying customers.

"There were two vessels, the Ouachita and the City of Camden, and they ran on about a two-week cycle--New Orleans-Camden-New Orleans, with stops along the way. The round-trip fare, including a bed and all meals, was $50. Traditional steamboat decorum was imposed, with the men required to wear coats in the dining room. At night, after supper was cleared, the waiters doubled as musicians for a dance."

Dee Brown, the Arkansas author best known for "Bury My Heart at Wounded Knee," told Portis of taking a boat from New Orleans to Camden as a teenager. He had a summer job at a filling station between Stephens and Camden and would sometimes hitchhike on weekends. He once hitched rides to the Crescent City and then used money he had saved to take the boat home.

"He paid a dollar for a night's lodging at a boarding house near the French Quarter," Portis wrote. "The trip back was a delight, as Mr. Brown remembers, a leisurely voyage of five or six days. He got full value for his $25. The big splashing wheel pushed the steamer back up the Mississippi, the Red, the Black, and at last in to the Ouachita at Jonesville, with the two walls of the forest closing in a bit more day by day.

"There were fine breakfasts of ham and eggs when ham was real ham, with grits and hot biscuits. At lunch one day, he found a split avocado on his plate, or 'alligator pear,' as it was called on the menu. 'I had never seen one before. I wouldn't eat it.'

"Young Mr. Brown was traveling light and so had to borrow a coat from a waiter at each meal before he could be seated. He had a tiny sleeping cabin to himself with a bunk bed and a single hook on the wall for his wardrobe. He enjoyed the nightly dances, though he had to sit them out as a wallflower because he didn't know how to dance. Townsfolk along the way came on board just for the dance, and among them were young Delta sports sneaking drinks of corn whiskey and ginger jake. These were Prohibition days. A young girl from New Orleans, traveling with her family, offered to teach Dee Brown how to dance. 'I wanted to dance with her, too, sure, but I just couldn't bring myself to do it.'"

Following the Louisiana Purchase in 1803, President Thomas Jefferson had commissioned four ventures to explore the new territory. Most Americans are familiar with the expedition of Meriwether Lewis and William Clark into the northern regions of the country's huge land purchase.

Fewer are familiar with the expedition of Zebulon Pike into the Rocky Mountains and the southwestern areas of the Louisiana Purchase. Fewer still are familiar with the Red River foray of Thomas Freeman and Peter Custis. And until historian Trey Berry came along, there was a dearth of information about the trip of William Dunbar and George Hunter up the Ouachita River as far as what's now Hot Springs.

"While the Ouachita River expedition was not as vast as and did not provide the expanse of geographic and environmental information collected by Lewis and Clark's Corps of Discovery, the exploration of Dunbar and Hunter remains significant for several reasons," wrote Berry, now the president of Southern Arkansas University at Magnolia. "It provided Americans with the first scientific study of the varied landscapes as well as the animal and plant life of early southern Arkansas and northern Louisiana. In fact, the expedition resulted in arguably the most purely scientific collection of data among all of the Louisiana Purchase explorations.

"The explorers described an extremely active and vibrant interaction between the European and the Native American population. Hunter and Dunbar also reported many encounters with European trappers, hunters, planters and settlers as well as fellow river travelers plying the waters of the Red, Black and Ouachita rivers. Their copious notes also portray a region in which these European and Indian inhabitants harvested the abundant natural resources along the rivers and in the lands beyond.

"The reports from both men show that the hot springs had become an important site for people seeking relief from ailments and infirmities. The expedition met several individuals who had either been to the springs or were on their way to bathe in its waters."

When Hunter and Dunbar arrived at what's now Hot Springs, they found a cabin and a few small shacks that had been built by people who had come to take advantage of the hot mineral water. Their daily journal entries were the first descriptions in English of the land along the Ouachita River in Arkansas and Louisiana.

"When the team neared Ecore a Fabri (modern-day Camden), the former site of a French settlement, two significant events occurred," Berry wrote. "First, the explorers found a tree with curious Indian hieroglyphs carved onto its trunk. The carvings portrayed two men holding hands and may have been the site of trade between Europeans and Native Americans.

"Second, as Hunter cleaned his pistol on the flatboat, the gun discharged. The bullet ripped through his thumb and lacerated two fingers. It continued through to his hat, missing his head by only fractions of an inch. Hunter remained in severe pain and danger of infection for more than two weeks. His eyes were burned, and he could not see to record entries in his journals and was little help to the expedition.

"Near the current site of Arkadelphia, they met a man of Dutch descent named Paltz. The Dutch hunter knew the area well, and he informed the explorers of a salt spring located nearby, as well as other natural features. Paltz told them he had 'resided 40 years on the Ouachita and before that on the Arkansas.'

"Hunter, Paltz and a small team investigated a salt pit and reported it to be of substantial nature. The chemist conducted specific gravity experiments on the saline water and discovered it to be a high concentration of what he called marine salt."

The group consisting of Hunter, Dunbar, 13 enlisted soldiers, Hunter's teenage son, two of Dunbar's slaves and one of Dunbar's servants had departed St. Catherine's Landing on the east bank of the Mississippi River on Oct. 16, 1804. Their vessel had been designed by Hunter in Pittsburgh. They later traded that boat for a flatboat with a cabin on deck. They secured the flatboat near what's now Monroe, La. Their return trip began Jan. 8, 1805, and they arrived in Natchez, Miss., on Jan. 27.

"Dunbar and Hunter were not the first to travel the Ouachita River or to taste the waters of the hot springs, nor were they the first to describe the region in journals or publications," Berry wrote. "They did succeed in the first scientific mapping and description of the Ouachita River valley. Their journals reveal an active European presence in the region with numerous small settlements and individual homesteaders, trappers and traders who had been utilizing the natural resources of the region for decades. . . .

"Their voyage did not rival Lewis and Clark's, but their journey up the Red, Black and Ouachita rivers, along with the explorations and journals of Freeman, Custis and Pike, are important accounts that complete the story of the Louisiana Purchase exploration."

The first steamboat came up the Ouachita in 1819. Glenn Gore of the Ouachita River Foundation writes that it made "such a strange sound and presented such a monstrous sight that it was described as 'a puffing dragon.' After that frightful debut, steamboats began to play an integral part in the colorful history connected with the Ouachita. The Ouachita was the great highway of commerce and transportation for the entire river valley."

The Dime had been built by pioneer merchant Jacob Barkman, who lived near what's now Caddo Valley. The vessel got its name when a man who had seen bigger boats on the Mississippi exclaimed, "Tain't no bigger than a dime."

The Will S. Hays was far larger, able hold 2,000 bales of cotton. It eventually sank when it was overloaded. As a boy, I daydreamed about boats like those and about being able to travel from my home all the way to New Orleans by water. The Ouachita was familiar yet exotic. It remains my river.