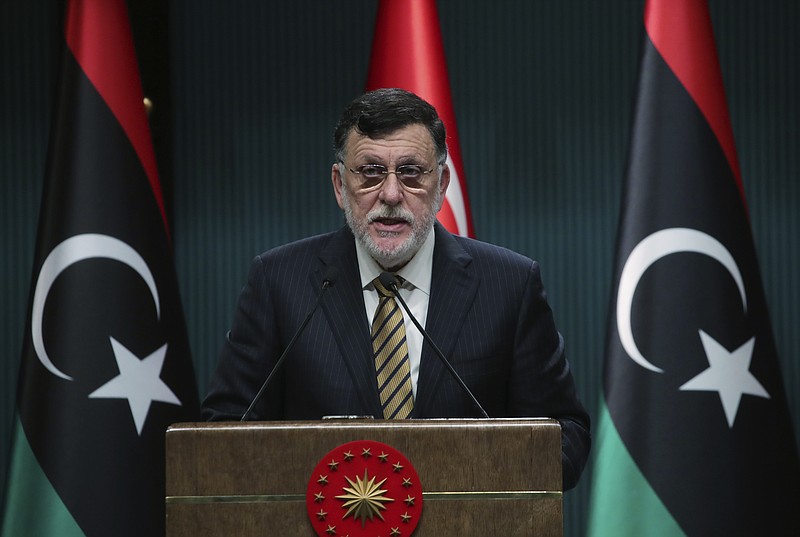 FILE - In this June 4, 2020 file photo, Fayez Sarraj, the head of Libya's internationally-recognized government, speaks at a joint news conference with Turkey's President Recep Tayyip Erdogan, in Ankara, Turkey. Libya’s U.N.-supported government Friday, Aug. 21, 2020, announced a cease-fire across the oil-rich country and called for demilitarizing the strategic city of Sirte, which is controlled by rival forces. (Turkish Presidency via AP, Pool)

CAIRO -- Libyan officials said Saturday that the leader of the United Nations-supported government would not support a deal with his primary rival in the country's civil war to lift a monthslong blockade on its vital oil trade.

According to an official at his office, Prime Minister Fayez Sarraj opposed the final deal struck with commander Khalifa Hifter, whose east-based forces led a failed yearlong siege to take the capital, Tripoli, from the U.N.-backed government.

"The prime minister did not give his approval to the final version of the deal," the official told The Associated Press, speaking on condition of anonymity.

Hifter said in a televised address Friday that his forces would allow the Libyan oil facilities to start operating again for the first time since January "with conditions that ensure a fair distribution of revenue."

The deal to start pumping Libyan oil again appeared to have been spearheaded by the deputy prime minister, Ahmed Matiq, and emerged days after Sarraj said he planned to hand over power by the end of October to a new administration in Tripoli.

Matiq struck an agreement to distribute the country's petrodollars more equitably between its warring sides, according to Ahmed al-Mosmari, the spokesman of Hifter's self-styled Libyan Arab Armed Forces.

Al-Mosmari said Saturday in televised comments that Hifter's army "opened communication links" with the Tripoli-based government, accusing Sarraj and militias backing him of opposing the resumption of oil production.

The deal between Matiq and Hifter's representatives did not address the scores of Russian mercenaries from Wagner, a Kremlin-linked private security company, stationed across oil fields that the National Oil Corp. says remain a barrier to the resumption of exports.

"Matiq surrendered very loose, very generous concessions to the LAAF, especially in the realm of banking and finance," said Jalel Harchaoui, a Libya expert at The Netherlands Institute of International Relations.

Matiq largely negotiated the deal in private with Hifter's son, Khalid, and its final shape took many Libyan leaders by surprise. Matiq and Hifter's son met earlier this month in Russia, a key supporter of Hifter.

Osama al-Juwaili, a military leader with Tripoli-allied forces, called the agreement a "farce" in televised comments.

Gomaa al-Gamaty, Sarraj's envoy to the Maghreb countries, tweeted that the deal is likely to fail since the prime minister, national oil company and the Central Bank in Tripoli were not part of it.

Mustafa Sanallah, the NOC's chairman, on Friday rejected what he called "secret" and "disorganized negotiations" aiming to undercut an internationally brokered political process to reopen the oil fields.

He said the NOC would not lift force majeure, a legal maneuver that lets a company get out of its contracts because of extraordinary circumstances, until Russian mercenaries fighting alongside Hifter's forces leave oil fields and terminals.

The NOC, however, took a step back on Saturday, saying in a statement that it would end the force majeure at "secured" oil fields and terminals, while the measure would be in place at oil facilities where there are Russian mercenaries from the Kremlin-linked Wagner Group and other armed groups.

The statement did not say which oil facilities, but the company had said in June that Wagner mercenaries entered the vast Sharara oilfield, Libya's largest.