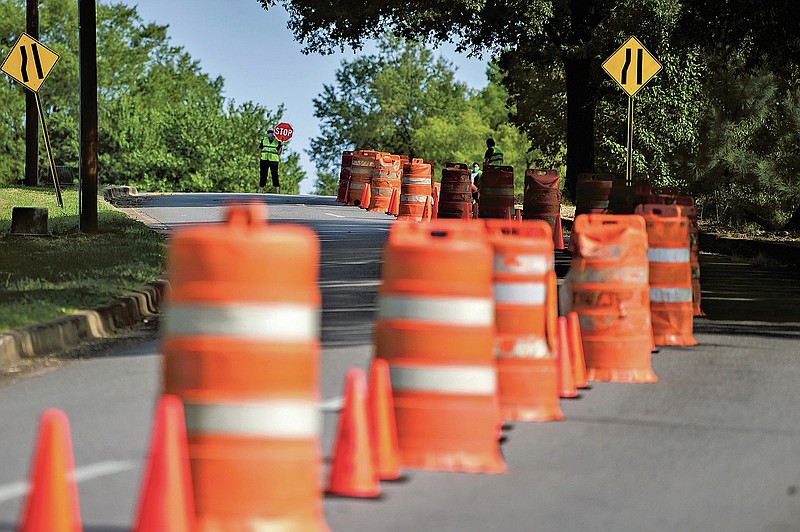 work to establish a bike lane along Jonesboro Drive between Children's Library, Little Rock Zoo, and War Memorial Park on Saturday, Sept. 19, 2020. The project, which will stay up until October 17, is the first implementation action of the new Safe Routes to Parks Plan, according to a news release. (Arkansas Democrat-Gazette / Stephen Swofford)

LITTLE ROCK -- A pop-up project adding lanes for cyclists and pedestrians between the Hillary Rodham Clinton Children's Library and War Memorial Park aims to make the amenities more accessible to nearby neighborhoods.

The Central Arkansas Library System and the city's Parks and Recreation Department have coordinated to open two lanes for people walking and biking on Jonesboro Drive, using signs and traffic cones. The project was set up Saturday and will stay up until Oct. 17.

In January, the Central Arkansas Library System received a $12,500 grant from the Safe Routes Partnership, a national nonprofit that seeks to improve the health of communities by making walking and biking through them safer. The money allows the library system and the city to begin implementing a "Safe Routes to Parks" action plan that it works on with the help of the nonprofit.

The library system's Kay Kay De Rossette, who is coordinating the project, said officials held online sessions to get feedback from community members on what they wanted to see implemented, particularly from people who live in neighborhoods close to War Memorial Park but separated from it by Interstate 630.

"There is a barrier to accessing War Memorial from the south side of the park, so we just wanted community input on what they thought would be the easiest way to access the park from south of the interstate," she said.

In a news release in June, Little Rock Parks and Recreation Director John Eckart said he looked forward to "improving access to one of our community's greatest treasures in War Memorial Park."

After several meetings that included neighborhood association representatives and nonprofits in the area, the team concluded that expanding walkability on the Jonesboro Drive bridge could be the safest option because it has a small amount of vehicle traffic compared with Fair Park Boulevard and University Avenue, De Rossette said.

According to notes from the meetings, the biggest barriers that people identified in using city parks safely included low walkability because of the lack of sidewalks, crosswalks, trails and paths; low connectivity from South Fair Park Boulevard, South University Avenue, South Jonesboro Drive and downtown; and traffic on Markham Street and Fair Park Boulevard.

Potential solutions that participants identified were connections to neighborhoods south of Interstate 630, more green spaces and landscaping to create space between parks and traffic.

An online survey posted in June also received responses from about 170 people.

The city has planned to address walkability in the area for years, but funding hasn't materialized. The temporary cyclist and pedestrian lanes are part of a broader vision for the area, which would include additional trails, green spaces and a proposed road alignment change.

During the project's monthlong span, officials will gather data on the paths' usage, which could help with a future grant application, De Rossette said. 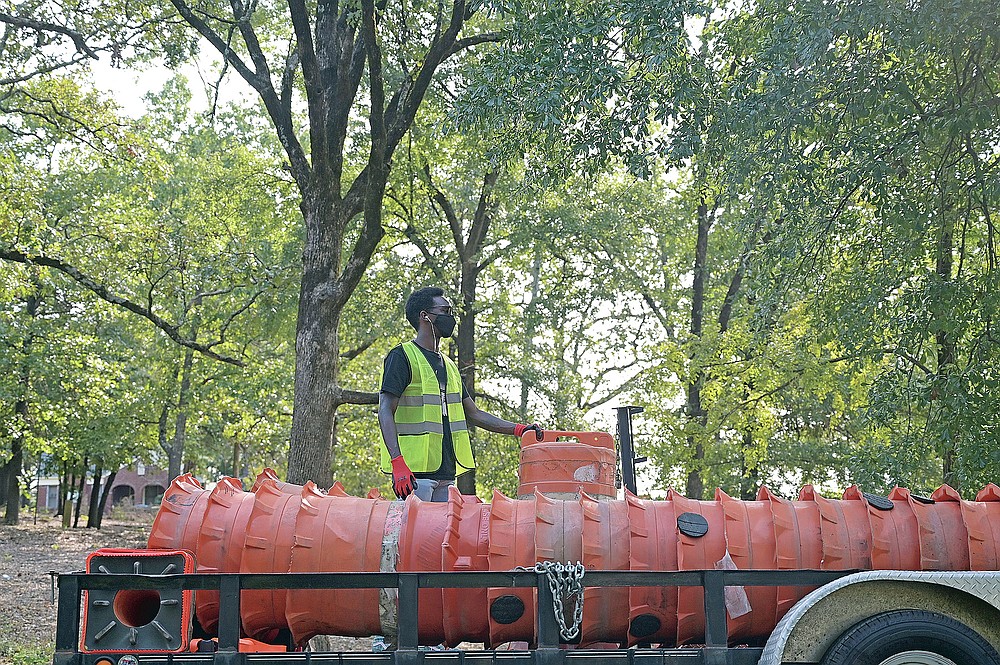 Maxime Pierre, Deputy Director of Recreation Services for Little Rock Parks and Rec, helps lay out traffic cones and barrels as he and a group of volunteers work to establish a bike lane along Jonesboro Drive between Children's Library, Little Rock Zoo, and War Memorial Park on Saturday, Sept. 19, 2020. The project, which will stay up until October 17, is the first implementation action of the new Safe Routes to Parks Plan, which is focused on ensuring people can safely enjoy the physical, social, and mental health benefits of parks, according to a news release. (Arkansas Democrat-Gazette / Stephen Swofford)
ADVERTISEMENT