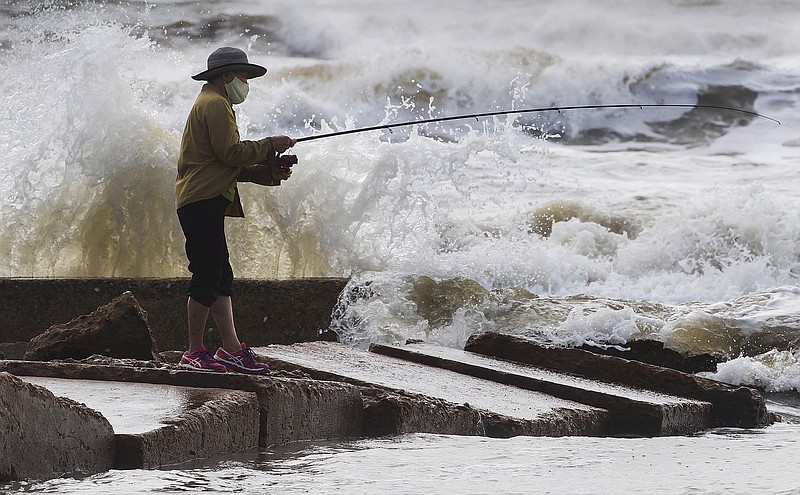 Waves crash as Houston resident Tinh Pham fishes from the rocks at Diamond Beach on the west end of the Galveston Seawall in Galveston, Texas on Saturday, Sept. 19, 2020. Tropical Storm Beta continues to move through the Gulf of Mexico and is expected to bring tidal surge and heavy rain to the area. (Stuart Villanueva/The Galveston County Daily News via AP)

OKLAHOMA CITY — Tropical Storm Beta slowly crawled toward the shores of Texas and Louisiana on Sunday, stirring worries that it could bring heavy rain, flooding and storm surge to a storm-weary stretch of the Gulf Coast.

Beta was one of three named storms whirling in the Atlantic basin during an exceptionally busy hurricane season. If the system makes landfall in Texas — which forecasters predict it will late Monday or early Tuesday — it would be the ninth named storm to make landfall in the continental U.S. in 2020. That would tie a record set in 1916, according to Colorado State hurricane researcher Phil Klotzbach.

As of late Sunday morning, Beta was aiming to make landfall along the middle or upper Texas coast but was no longer expected to reach hurricane intensity, according to the National Weather Service. Flooding from rainfall was expected to be the major threat from Beta, which after making landfall was expected to move northeastward along the coast Tuesday through Thursday before heading into Louisiana.

Coastal communities began preparing for Beta over the weekend, with the Texas city of Galveston and surrounding Galveston County issuing voluntary evacuation orders on Saturday. Seabrook, north of Galveston, issued its own order.

Craig Brown, the mayor pro tem of Galveston, said in a statement that high tides and up to 10 inches of expected rainfall would leave roads impassable, especially in the west end and low-lying areas of the city.

Judge Mark Henry, the top elected official for Galveston County, said Saturday that a mandatory evacuation order isn't expected, but that he was concerned about the damage that storm surge could cause and suggested that people find a safer place to wait out the storm, if possible.

“If you can survive in your home for three or four days without power and electricity, which we’re not even sure that’s going to happen, you’re OK,” Henry said. “If it’s uncomfortable or you need life support equipment, maybe go somewhere else.”

Beta was churning slowly through the Gulf late Sunday morning about 180 miles southeast of Galveston, the U.S. National Hurricane Center said. The storm had maximum sustained winds of 60 mph and was moving west-northwestward at 3 mph.

A tropical storm warning was in effect for a stretch of coastline stretching from Port Aransas, about 165 miles southwest of Galveston, to Morgan City, Louisiana, 80 miles west of New Orleans. A hurricane watch, a tropical storm watch and a storm surge watch were all discontinued Sunday morning.

In Lake Charles, Louisiana, where thousands of people remained without power more than three weeks after Hurricane Laura slammed into the coast, there were concerns that Beta could super-soak the region again. Up to 20 inches of rain could fall in some parts of the area, Donald Jones, a National Weather Service meteorologist based in Lake Charles, said during a Saturday briefing.

“A lot of people have been saying, ‘Is this going to be like Harvey? Is this going to be like Imelda?'" Jones said. “We’re not talking about rainfall totals yet that are on the orders of magnitude that we saw with that.” Imelda, which struck southeastern Texas in 2019, was one of the wettest cyclones on record. Harvey dumped more than 50 inches of rain on Houston in 2017 and caused major flooding and damage.

However, if the storm ends up moving a bit slower than what’s being forecast now, rainfall totals could exceed 20 inches, Jones said.

“Harvey was a very specific and unique event, but we are talking about the same idea in terms of very heavy, heavy rainfall," he said.

Forecasters were predicting up to 4 feet of storm surge from Port Aransas to the Rockefeller Wildlife Refuge near Lake Charles. Strong winds, and life-threatening surf and rip current conditions were also expected.

Forecasters ran out of traditional storm names on Friday, forcing the use of the Greek alphabet for only the second time since the 1950s.

Meanwhile, Hurricane Teddy remained a powerful hurricane Sunday, with maximum sustained winds of 105 mph and moving northwestward at 9 mph. Teddy was centered 300 miles south-southeast of Bermuda less than a week after Hurricane Paulette made landfall in the wealthy British territory. A tropical storm warning was in effect for Bermuda.

Tropical Storm Wilfred was still at sea but was expected to dissipate by Tuesday.

Parts of the Alabama coast and Florida Panhandle were still reeling from the effects of Hurricane Sally, which roared ashore on Wednesday. At least two deaths were blamed on the system. Roughly 82,300 were still without power in the Florida Panhandle on Saturday. Gulf Power said 95% of its customers in hardest hit Escambia and Santa Rosa counties will have power restored by the end of the day Tuesday.

The Salvation Army was distributing roughly 10,000 meals Saturday at 10 locations throughout the Panhandle.