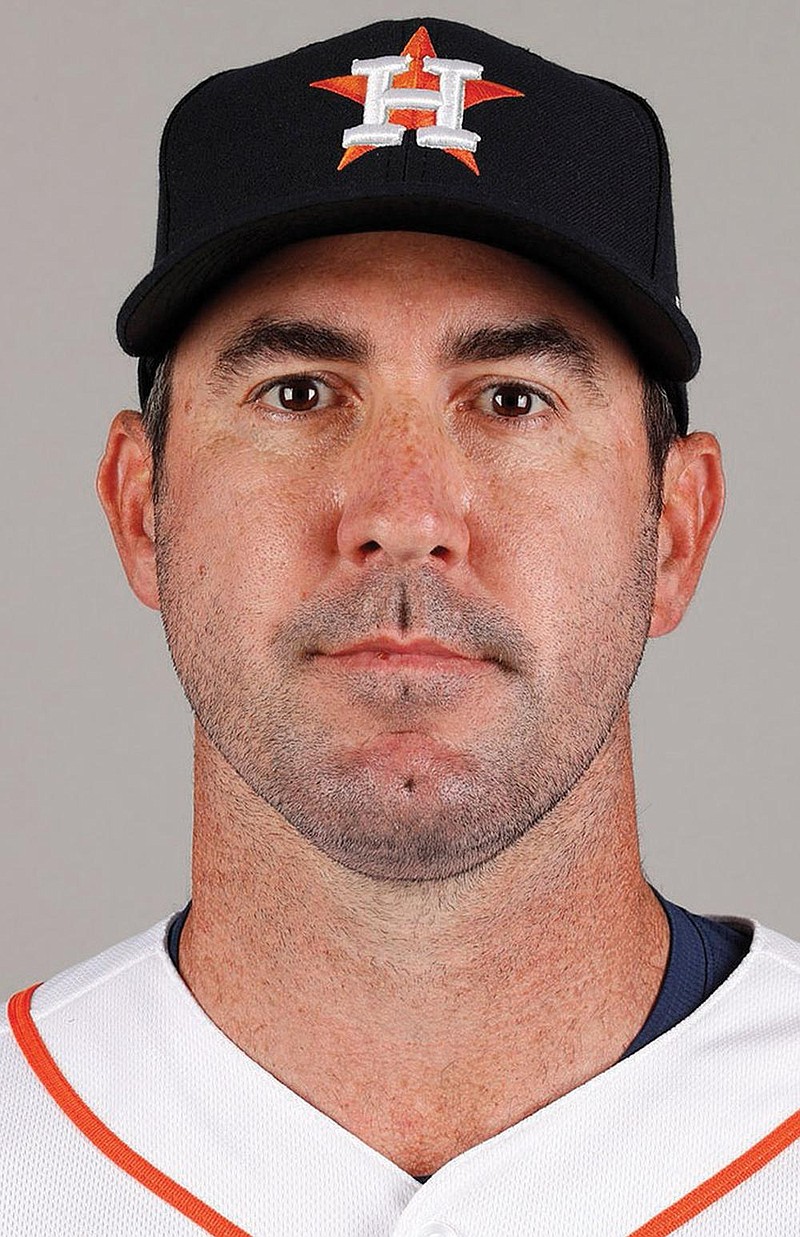 This is a 2020 photo of Justin Verlander of the Houston Astros baseball team. This image reflects the Astros active roster as of Tuesday, Feb. 18, 2020, when this image was taken. (AP Photo/Jeff Roberson)

HOUSTON -- Houston Astros ace Justin Verlander will undergo Tommy John surgery and is expected to be out through the 2021 season, ending his bid to make a late return for a playoff push.

The reigning American League Cy Young Award winner announced the news Saturday on his Instagram account in a 1½-minute video.

"In my simulated game a couple days ago, I felt something in my elbow, and after looking at my MRI and conversing with some of the best doctors in the world, we've determined that Tommy John surgery is my best option," Verlander said.

The 37-year-old right-hander threw to hitters on Wednesday for the first time since he was injured in the team's opener on July 24. He threw 50 pitches in the bullpen before throwing about 25 pitches to hitters in two simulated innings.

"I tried as hard as I could to come back and play this season," Verlander said. "Unfortunately, my body just didn't cooperate."

Houston Manager Dusty Baker said he was hopeful Verlander would return, but he was also fearful of how things were looking.

"I talked to him this morning," Baker said. "He's not crazy about the outcome, but it is what it is. He has to get it taken care of. He's pitched for years. He's been a warrior and a leader. Hopefully, this will prolong his career, and he can be back to pitching. I always told him he's a medical marvel, and he's a great physical specimen."

The Astros entered Saturday at 25-26 and holding the eighth and final AL playoff spot. They were three games ahead of Seattle for second place in the AL West.

Verlander is under contract with the Astros through 2021. Click said it was too early to discuss 2022, with the focus being on Verlander getting through the surgery and rehab process.

"As far as next season goes, it makes the offseason that much more challenging, but we have a talented group here, and we will figure something to try to do what we can to put this team in a position to be competitive next year without Justin Verlander," Click said.

Verlander has been on the injured list with a right forearm strain. He had groin surgery in mid-March and would've missed the opener if the big-league season hadn't been delayed because of the pandemic.

When the season began in late July, he beat the Mariners on opening day, holding them to 2 runs on 3 hits in 6 innings and striking out 7.

Verlander went 21-6 with a 2.58 ERA last year, striking out a career-high 300 and throwing his third no-hitter overall. He pitched 223 innings, most in the majors, and then made six more starts in the postseason as the Astros reached the World Series.

"Obviously, this is not good news," Verlander said. "However, I'm going to handle this the only way I know how. I'm optimistic. I'm going to put my head down, work hard, attack this rehab and hopefully, come out the other side better for it." 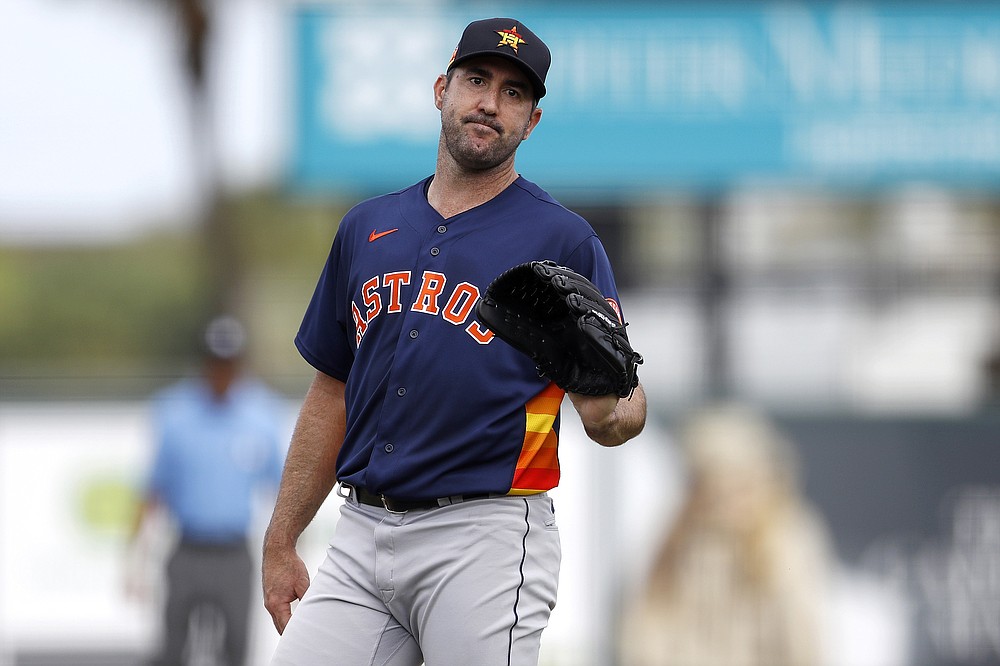 FILE - In this March 3, 2020, file photo, Houston Astros pitcher Justin Verlander reacts after a pitch during the third inning of a spring training baseball game against the St. Louis Cardinals in Jupiter, Fla. The Astros announced Saturday, Sept. 19, 2020, that Verlander needs Tommy John surgery and could miss the entire 2021 season. (AP Photo/Julio Cortez) 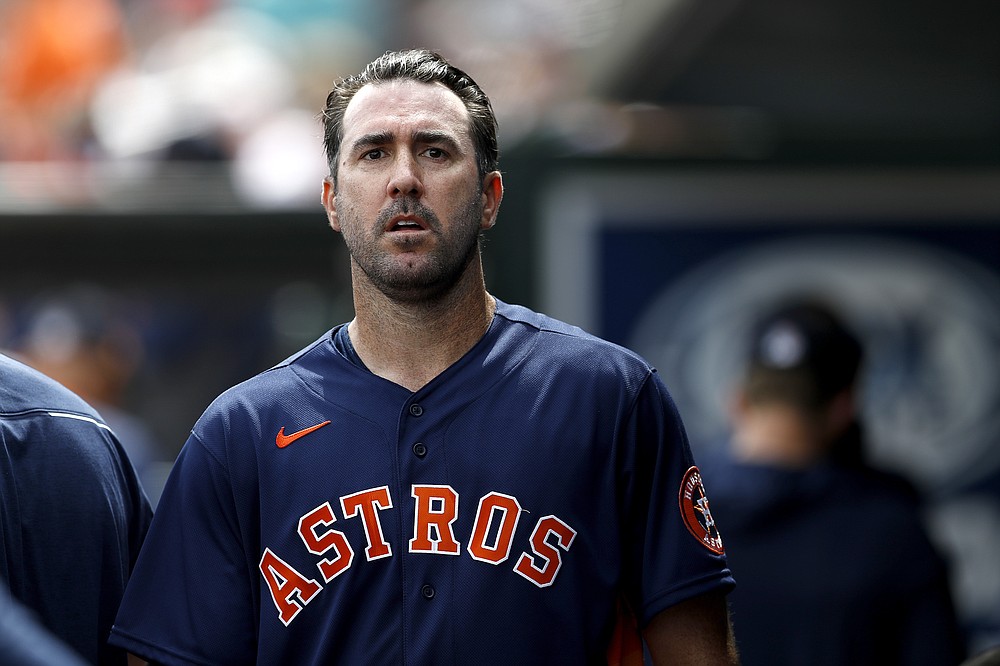