Murkowski sticks to guns on filling Ginsburg’s seat by Compiled by Democrat-Gazette Staff From Wire Reports | September 21, 2020 at 7:34 a.m. 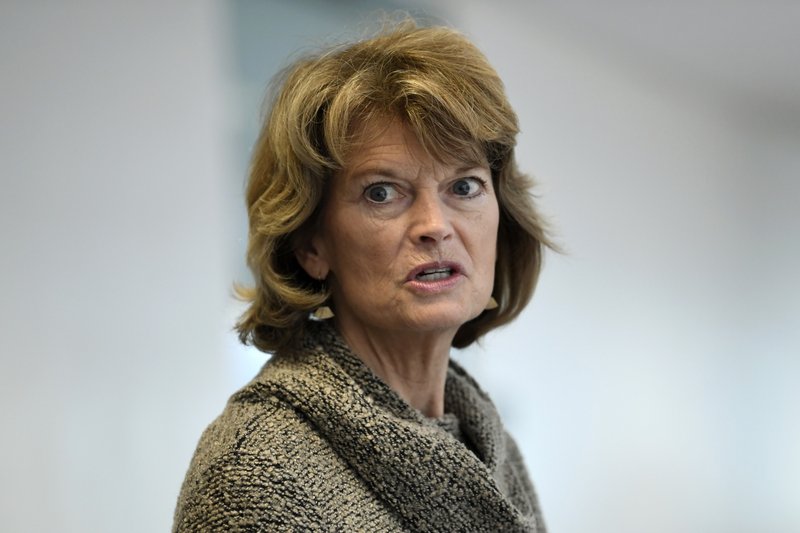 WASHINGTON -- A second Republican senator came out in opposition to filling a vacant U.S. Supreme Court seat before the Nov. 3 election, while Speaker Nancy Pelosi asserted without details that the Democratic-led House has "options" for stalling or preventing President Donald Trump from quickly installing a successor to the late Justice Ruth Bader Ginsburg.

[Video not showing up above? Click here to view » https://www.youtube.com/watch?v=pBEjTyqUGxI]

Sen. Lisa Murkowski of Alaska said in a statement that "for weeks, I have stated that I would not support taking up" a potential nomination as the presidential election neared. "Sadly, what was then a hypothetical is now our reality, but my position has not changed."

Murkowski joins Maine's Sen. Susan Collins, who said replacing Ginsburg should be the decision of the election winner -- Trump or Democrat Joe Biden. Republicans hold a 53-47 edge in the Senate. If there were a 50-50 tie, it could be broken by Vice President Mike Pence.

Sen. Tom Cotton, R-Ark., said Sunday that indeed "there will be a vote" on a nominee -- and said it will not be him, though he had been on Trump's short list.

Speaking on "Fox News Sunday," Cotton said: "I guess we can break some news here that I'm not under consideration, since the president said he's going to nominate a woman. And I've already communicated with the White House that now is not the time to have me under consideration. I'm on the ballot in Arkansas ..." for reelection.

But Cotton said the Senate will act: "There have been some cases, like Justice Ginsburg herself, in which the nomination and confirmation process took less than 44 days," Cotton said. "There have been other cases in which it took longer. So it's too soon to say right now. But we will move forward without delay."

After Murkowski and Collins, focus is growing on Sen. Mitt Romney, R-Utah, who has broken with Trump before. There is another potential wrinkle: Because the Senate race in Arizona is a special election, that seat could be filled as early as Nov. 30, which would narrow the window for McConnell if Democrat Mark Kelly wins.

The House has no formal say in presidential nominations, a role the Constitution assigns to the Senate, and Pelosi, D-Calif., declined in a television interview to detail the "arrows in our quiver," even when asked about trying to impeach Trump a second time.

Biden on Sunday urged Republicans not to rush a Supreme Court nominee through the Senate in the final six weeks before the election, suggesting that such a move would amount to an "abuse of power" at an already perilous moment in American political history.

In his first extensive remarks on the looming battle since he acknowledged the death of Ginsburg on Friday, Biden appealed directly to the few pivotal Senate Republicans "who really will decide what happens," urging them to oppose an effort to push through a nominee before the election.

"Please, follow your conscience," he pleaded in a speech at the National Constitution Center in Philadelphia. "Don't vote to confirm anyone nominated under the circumstances President Trump and Sen. McConnell have created. Don't go there. Uphold your constitutional duty. Your conscience. Let the people speak. Cool the flames that have been engulfing our country."

Biden also used the sudden court vacancy to reinforce his argument that the election should be a referendum on Trump's handling of health care and the coronavirus.

The death of Ginsburg jolted the presidential campaign just six weeks before the election and as several states are already voting. Trump has seized on the opportunity to nominate a new justice to motivate his most loyal voters. Biden kept the focus on health care, which has proved to be a winning issue for Democrats during previous elections and could be even more resonant amid the pandemic.

The Supreme Court will hear a Republican-led case seeking to throw out the Patient Protection and Affordable Care Act the week after the Nov. 3 election. Biden charged that Trump is seeking to undermine the protections for people with pre-existing conditions under the ACA, as well as its provisions covering preventative care for women.

"Millions of Americans are voting because they know their health care hangs in the balance," Biden said. "In the middle of the worst global health crisis in living memory, Donald Trump is before the Supreme Court, trying to strip health care coverage away from tens of millions of families."

The court could also hear cases on a few more particularly salient issues in the next few months: voting rights, and potentially who wins the November election.

"In a raw political move, this president and the Republican leader have decided to jam a lifetime appointment to the Supreme Court through the United States Senate," Biden said. "That's the last thing we need at this moment."

Ginsburg's death Friday at age 87 has injected new ferocity into the battle for the presidency and control of Congress, in a nation already struggling with the coronavirus pandemic, economic collapse and racial tension. The talk on the Sunday news shows gave a glimpse of the power tug over the timing of any vote to fill Ginsberg's seat 44 days from the election.

Trump says he is obligated to act as soon as possible and had at least two women in mind for the seat. Most Republicans concurred on the need for speed and one named a practical reason: The nine-seat court, argued Sen. Ted Cruz of Texas, must be full if called upon to decide the outcome of a disputed presidential election.

Democrats urged the GOP Senate majority to heed its own advice against filling the court's lifetime slots so close to elections.

Pelosi was asked whether she would be open to the House undertaking impeachment proceedings against Trump or Attorney General William Barr, as a way of trying to stall the confirmation process. She did not rule out doing so.

"We have our options. We have arrows in our quiver that I'm not about to discuss right now," she said. Pelosi had stopped by the court in the quiet of early Sunday morning to pay tribute to Ginsburg at the site that since Friday has filled with people, many leaving bouquets of flowers.

The next justice, Pelosi said, would help determine the survival of the Affordable Care Act. "Those are the people the president wants to crush when he says he wants to replace the justice in this short period of time," she said.

Nonetheless, the process was moving ahead. On a call with McConnell late Saturday, Trump mentioned two federal appeals court judges: Amy Coney Barrett and Barbara Lagoa, according to a person familiar with the private conversation who was not authorized to publicly discuss the call and spoke on condition of anonymity.

Some Democrats have suggested Barr should be impeached for what they say is the politicization of the Justice Department under his watch. After the election, new impeachment proceedings could by less risky to the Democrats than was their impeachment of Trump last year. The Senate acquitted him.

But the House's options are few to bog down Trump. Impeachment is time-consuming, expensive and reserved for the most egregious wrongdoing.

To chants of "Fill that seat," Trump told supporters at an event Saturday night in North Carolina that he would nominate a woman as soon as this week.

"We win an election and those are the consequences," said Trump, who then seemed to signal that he'd be willing to accept a vote on his nominee during the lame-duck period after the election. "We have a lot of time. We have plenty of time. We're talking about January 20th" -- when the next president is inaugurated.

Cruz said all nine seats need to be filled by the election.

"An equally divided court, four-four, can't decide anything," he said. "We need a full court on Election Day, given the very high likelihood that we're going to see litigation that goes to the court. We need a Supreme Court that can find a definitive answer for the country."

Democrats have denounced McConnell's move to push ahead as hypocritical, pointing out that he refused to call hearings for President Barack Obama's nominee of Judge Merrick Garland 237 days before the 2016 election.

​​​​​Information for this article was contributed by Laurie Kellman, Lisa Mascaro and Alexandra Jaffe of The Associated Press; by Katie Glueck and Thomas Kaplan of The New York Times; and by Derek Hawkins, Felicia Sonmez, Winfield Cunningham and Lenny Bernstein of The Washington Post. 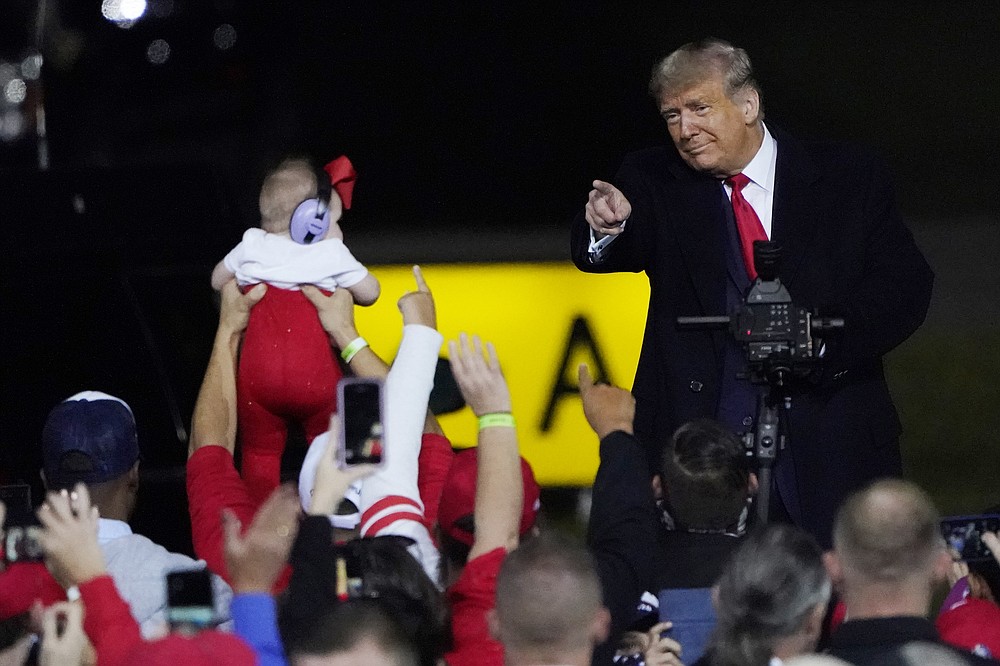 President Donald Trump wraps up his speech and points to an infant at a campaign rally at Fayetteville Regional Airport, Saturday, Sept. 19, 2020, in Fayetteville, N.C. (AP Photo/Chris Carlson) 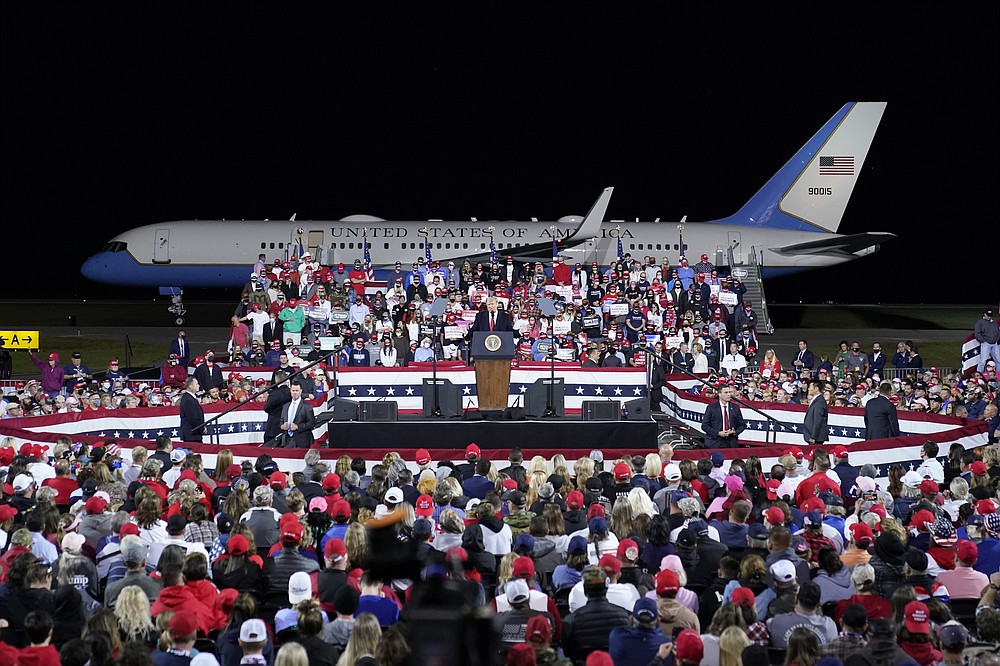 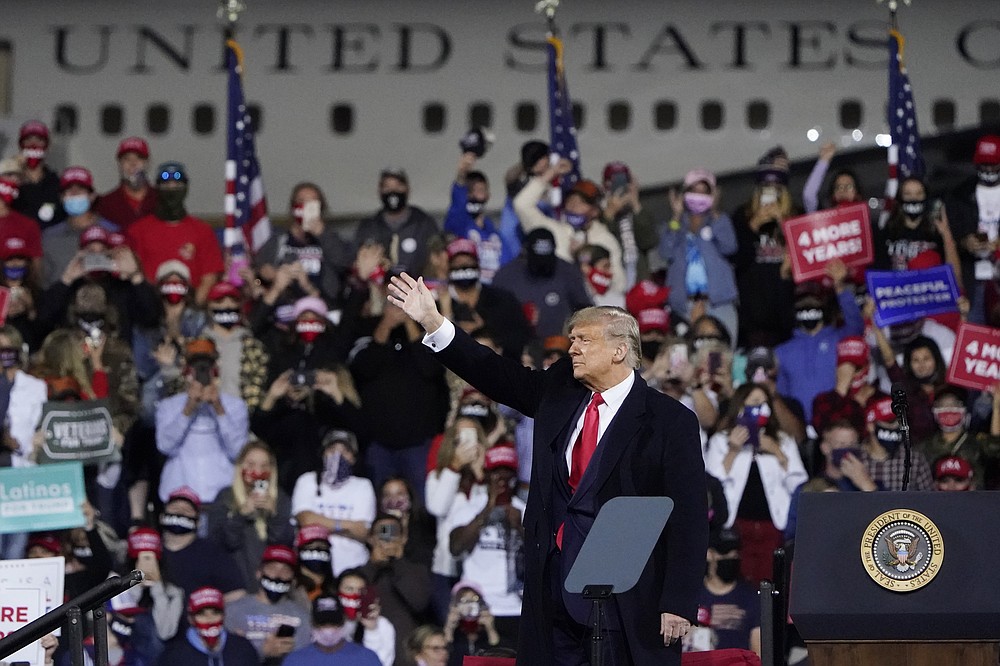 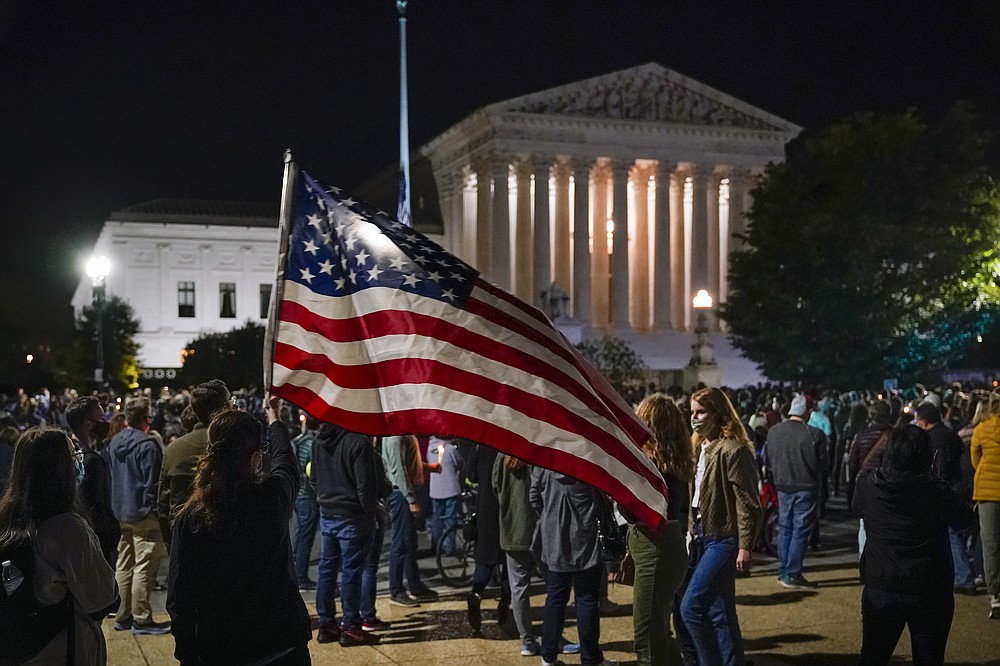 People gather at the Supreme Court in Washington, Saturday night, Sept. 19, 2020, to honor the late Justice Ruth Bader Ginsburg, one of the high court's liberal justices, and a champion of gender equality. Her death leaves a vacancy that could be filled with a more conservative justice by President Donald Trump. (AP Photo/J. Scott Applewhite) 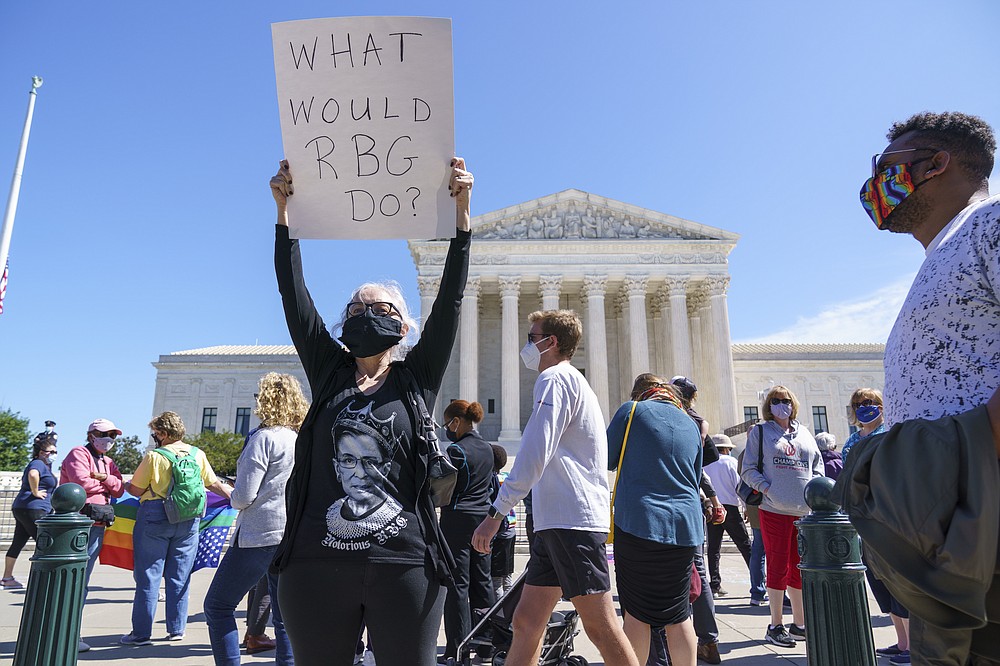 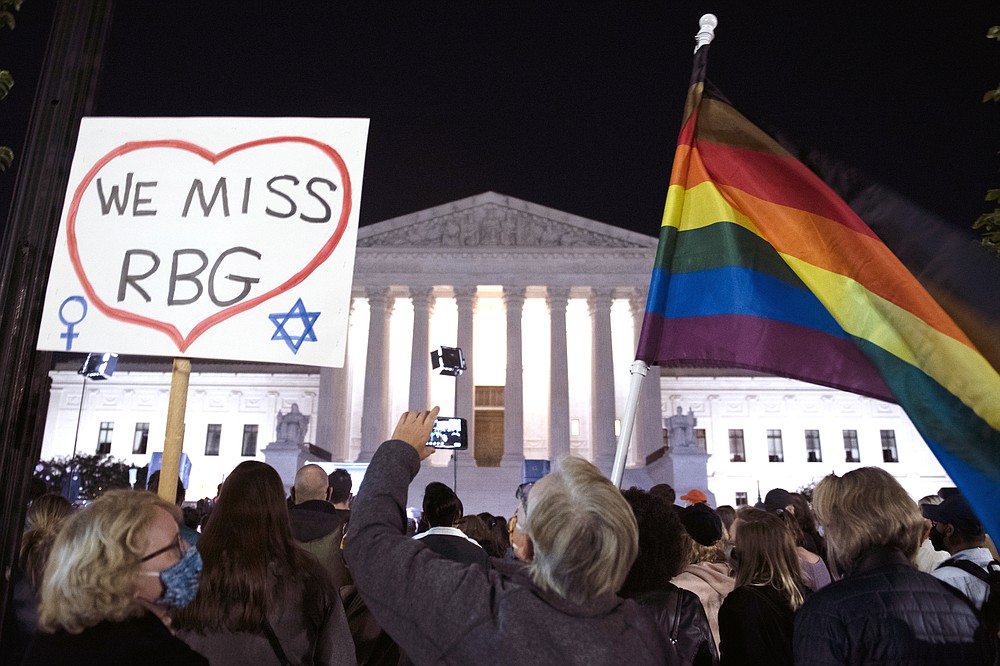