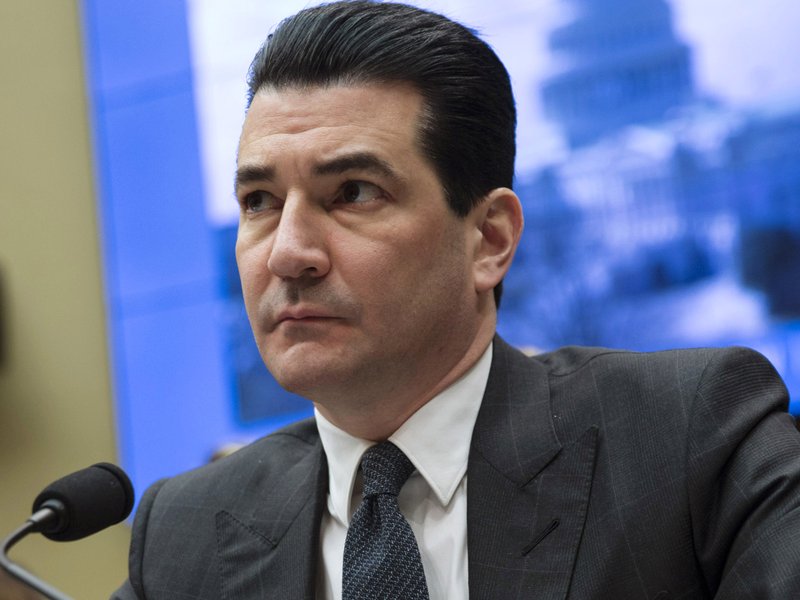 Scott Gottlieb, commissioner of the Food and Drug Administration, is shown in this file photo.

Former Food and Drug Administration Commissioner Scott Gottlieb said Health and Human Services Secretary Alex Azar's move to bar agencies under his authority from signing their own rules is a "major distraction" that creates "an implication, or at least a specter," that the FDA's independence is being eroded or influenced.

"The timing of this is really poor right now, because it's going to distract the agency and frankly creates headlines that could leave the perception that the agency is being bullied," Gottlieb said on CBS on Sunday.

Azar has barred agencies under his authority, including the FDA, from signing new rules, The New York Times reported Saturday. The report cited a Sept. 15 memo from Azar that was sent to Health and Human Services leaders and said rule-signing authority is "reserved to the Secretary."

The FDA is a key agency guiding the decisions in the development of a covid-19 vaccine, three of which are in advanced U.S. clinical trials, and the Times reported that it was unclear whether Azar's move would change that process. The FDA has been under political pressure for quick movement, with President Donald Trump predicting approval of a vaccine sooner than senior administration officials foresee.

Political appointees, under pressure from Trump, have taken a string of steps over the past few months to interfere with the standard scientific and regulatory processes at the health agencies. For example, a much criticized guideline on testing for the coronavirus was not written by scientists at the Centers for Disease Control and Prevention, and was posted on the agency's public website over their objections. It was reversed Friday.

Gottlieb doesn't see a scenario where Trump could override the FDA to green-light a vaccine "where it's not readily apparent" to the public. He also doesn't expect manufacturers to commercialize a vaccine without the consent of FDA health professionals.

Nevertheless, the move could give conservative groups a foothold and create an avenue for them to challenge tobacco rules legally, Gottlieb said.

More broadly, the action will make it harder for the FDA to do rule-making on the nation's foods, medicines, medical devices and other products, the newspaper said.

Brian Harrison, Azar's chief of staff, described the new policy as "a housekeeping matter" aimed at no agency in particular, the Times said. He said the change would have no bearing on how the agency deals with coronavirus vaccines.

"This was simply pushing a reset button," Harrison said. "This is good governance and should have no operational impact."

Other outside observers, however, were also alarmed by the memo and worried that it could contribute to a public perception of political meddling in science-based regulatory decisions. Dr. Mark McClellan, who formerly headed the FDA and now runs Duke University's health policy center, praised the agency's work on vaccine development but said the policy change was ill-timed.

"We're in the midst of a pandemic, when trust in the public health agency is needed more than ever," he said. "So I'm not sure what is to be gained with a management change with respect to FDA when they are doing such critical work."

Dr. Peter Lurie, president of the Center for Science in the Public Interest and a former associate commissioner of the FDA, called the new policy "a power grab."

Many rules issued by federal health agencies are signed by lawyers or by the heads of agencies, including the FDA, under the umbrella of Health and Human Services. The new memo requires the secretary to sign them, which Lurie said could lead to delays in the regulatory process.

"It will introduce an element of inefficiency within government operations that is wholly unnecessary and likely to gum things up," he said.

An FDA official, who was not permitted to speak on the record, said the agency was still deciphering what Azar's memo would mean for their work.

But former senior officials with the FDA and Health and Human Services speculated that the intent was to remove rule-making power from Dr. Stephen Hahn, the FDA commissioner, and to send a signal to Trump that no surprises would come from the agency in the weeks before the election.

"I can only conclude that this memorandum shows a lack of trust in the FDA commissioner and other HHS leaders," said William Schultz, a former general counsel with Health and Human Services and a partner at a law firm.

In the U.K., meanwhile, Health Secretary Matt Hancock warned that national restrictions could be reimposed unless the recent spike in infections is brought under control.

He said the U.K. is facing a "tipping point" in the battle to limit the spread of the disease. The government reported 4,422 new covid-19 cases Saturday, the biggest daily increase since early May.

"The choice is either everybody follows the rules, or we will have to take more measures," he said. "I don't want to see more restrictive measures, but if people don't follow the rules, that's how the virus spreads."

Hancock spoke after the government confirmed that people in England who refuse an order to self-isolate could be fined up to almost $13,000. A new legal duty requires people to self-isolate if they test positive for coronavirus, or are traced as a close contact, starting Sept. 28.

[Video not showing up above? Click here to view » https://www.youtube.com/watch?v=oGS7wSIMCbE]

"I'm very worried about this second wave," Hancock said. "We've seen in Europe it can shoot through the roof. I can't overemphasize enough the importance of this message: We must follow rules on social distancing. That way we can avoid an incredibly difficult lockdown until the cavalry comes with a vaccine and mass testing is on the horizon."

With infections on the rise, the U.K. test and trace system is under strain and millions of people across the country have been placed under local restrictions. Mayor of London Sadiq Khan warned further restrictions will probably be needed "soon" in the British capital, where infection rates are the highest in the country after the northwest.

Officials in London met Sunday amid reports that fresh curbs could be imposed as early as today, with Londoners once again asked to work from home if possible. Khan, who anticipates London is just days behind hot spots in the northeast of England and Manchester, is pressing for 10 p.m. curfews on pubs and a ban on mixing of households, according to the Huffington Post.

There are also reports that ministers are considering a two-week national lockdown in October as a virus "circuit-breaker." Hancock once again refused to rule out any option, but insisted countrywide measures were a "last line of defense."

Another lockdown would deliver a further blow to an economy that shrank more than any other major developed country during the pandemic.

​​​​​Information for this article was contributed by Todd Shields, Yueqi Yang and Andrew Atkinson of Bloomberg News; and by Sheila Kaplan of The New York Times.