Brady rebounds with help from Fournette 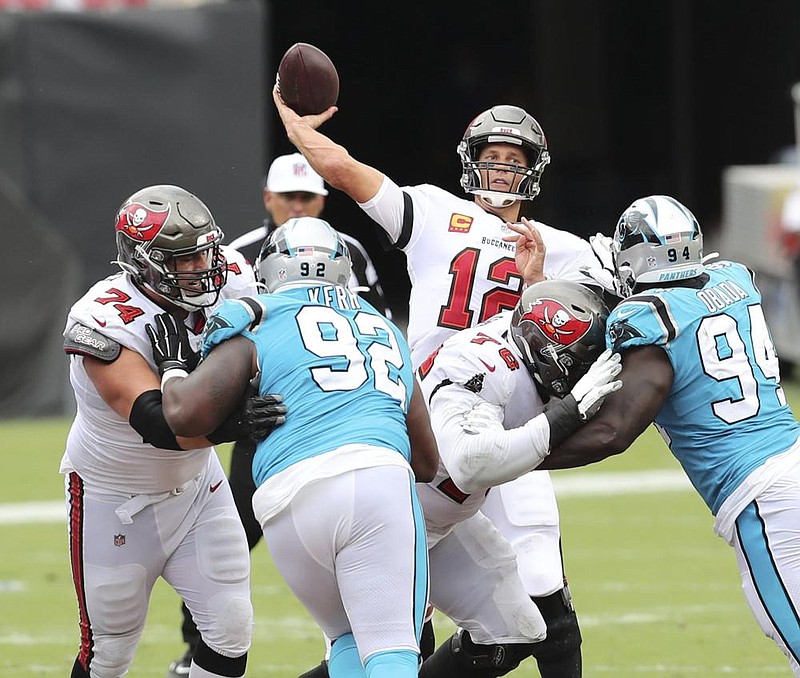 Tampa Bay Buccaneers quarterback Tom Brady (12) throws a pass against the Carolina Panthers during the second half of an NFL football game Sunday, Sept. 20, 2020, in Tampa, Fla. (AP Photo/Mark LoMoglio)

The six-time Super Bowl champion's perfect when it comes to rebounding from rare season-opening losses during a 21-year career after tasting victory with the Tampa Bay Buccaneers for the first time on Sunday in a 31-17 win over the Carolina Panthers.

Brady threw for 217 yards, one touchdown and an interception, while getting a lot of help from another acquisition since last season, Leonard Fournette, who came off the bench to rush for 103 yards and two touchdowns.

"Our execution was a little bit better. I think we're still a long way from where we need to be," Brady said. "I think if we have the ability to make plays, consistency, dependability are going to be things that we really need. So, we've got to get back to work. Clock's ticking on next week."

"He has a pretty good history of that," Tampa Coach Bruce Arians said. "This game should have never gotten to as close as it did. But I thought he was outstanding. His leadership on the sideline was great, and he put us in the right play with a number of different audibles and played really, really well."

Brady tossed a 23-yard touchdown pass to Mike Evans in the first quarter. Fournette scored on runs of 1 and 46 yards, the latter coming after Carolina rallied from a 21-0 halftime deficit to pull within 24-17 on a pair of touchdown runs by Christian McCaffrey and Joey Slye's 23-yard field goal with 1:57 remaining.

"I tried to put the icing on the cake for the team," said Fournette, a two-time, 1,000-yard rusher who's been with Tampa Bay less than two weeks after being released by the Jacksonville Jaguars.

Brady completed 23 of 35 passes, and Evans finished with seven receptions for 104 yards. Fournette averaged 8.6 yards per carry on 12 rushing attempts.

Teddy Bridgewater was 33 of 42 for 367 yards and 2 interceptions for the Panthers (0-2), who had four turnovers in addition to nine penalties. Carolina also allowed five sacks, one of them resulting in a fumble that set up Brady's only TD pass.

"We just can't beat ourselves and have negative plays," Bridgewater said. "But hats off to Tampa. They are a great team. We talked about protecting the ball and protecting the QB, and we have four turnovers. I have to be better and I take ownership in that."

McCaffrey, who spent most of the fourth quarter on the sideline with a lower leg injury, scored on runs of 1 and 7 yards. He finished with 88 yards from scrimmage, 59 rushing on 18 carries and 29 receiving on 4 catches.

"It's tough when you don't have your best players on the field," Bridgewater said.

"Nine penalties and four giveaways, but it's a one-score game in the fourth quarter," Panthers Coach Matt Rhule said. "We have to do a better job of playing clear football."

Brady threw for 239 yards and two TDs during Tampa Bay's 34-23 season-opening loss at New Orleans. He also hurt the Bucs with a pair of interceptions, including one that was returned for a touchdown and drew criticism from Arians.

The defense set the tone for Sunday's victory, forcing two turnovers within a three-play span of the first quarter after not having any takeaways during the season opener.

Jordan Whitehead's interception preceded a 10-play, 78-yard touchdown drive Brady fueled with a 50-yard completion to Evans and that Carolina extended with a personal foul that gave the Bucs a first down at the Panthers 7.

Ronald Jones ran it in on the next play for a 7-0 lead Brady quickly built to two touchdowns after rookie safety Antoine Winfield Jr. sacked Bridgewater and Jason Pierre-Paul recovered to set up Evans' 23-yard TD catch on the next play.

"I thought Teddy was under duress too much of the day. They are a pressure defense and they were getting their hands on him," Rhule said.

"I thought he competed and there will be days where you can't get things flowing," the Panthers coach added. "But I was proud he kept pushing the pedal and got us back in the game." 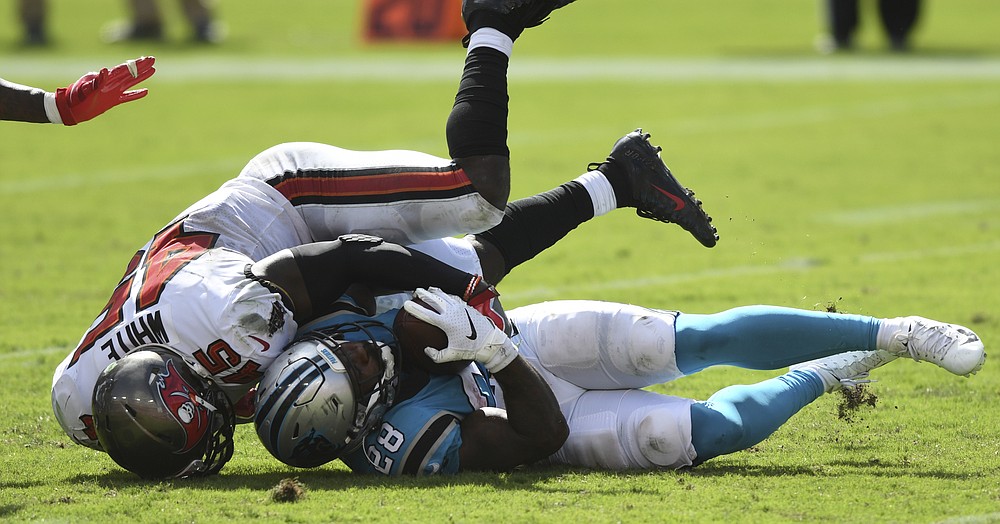 Carolina Panthers running back Mike Davis (28) gets taken down by Tampa Bay Buccaneers linebacker Devin White during the second half of an NFL football game Sunday, Sept. 20, 2020, in Tampa, Fla. (AP Photo/Jason Behnken) 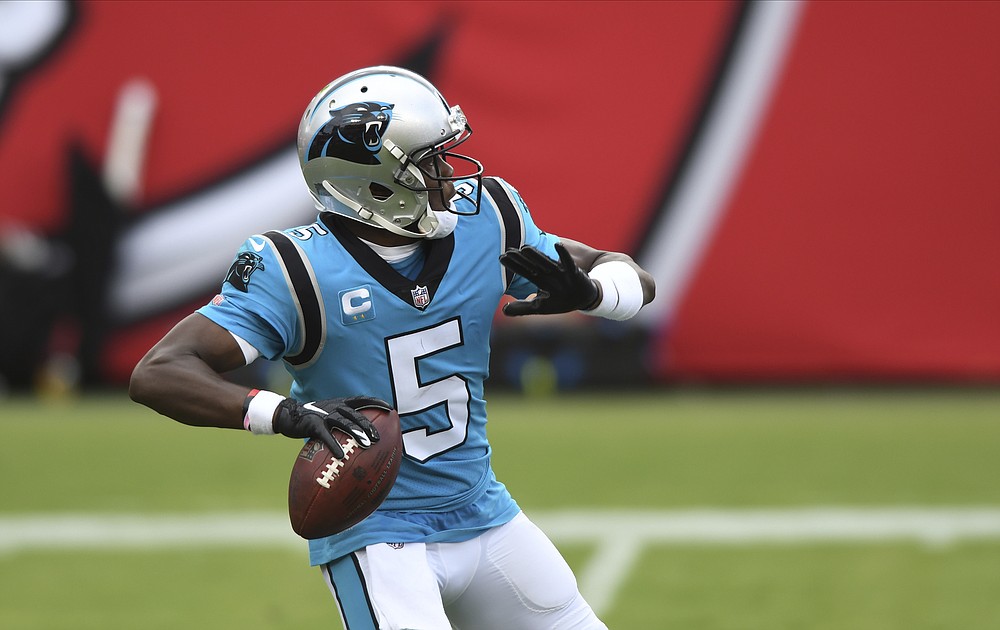 Carolina Panthers quarterback Teddy Bridgewater (5) throws a pass during the second half of an NFL football game against the Tampa Bay Buccaneers Sunday, Sept. 20, 2020, in Tampa, Fla. (AP Photo/Jason Behnken) 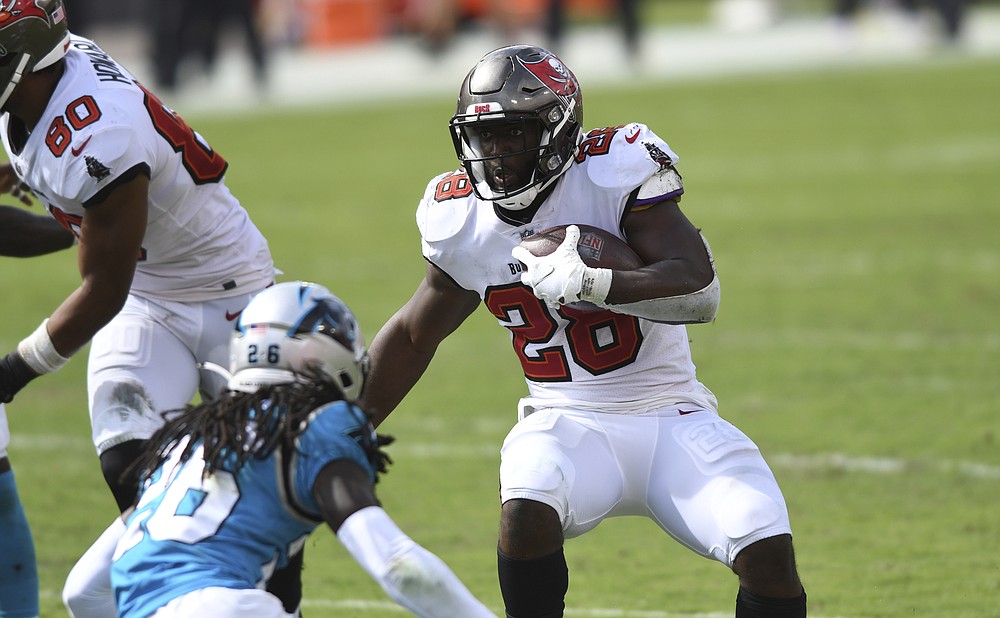 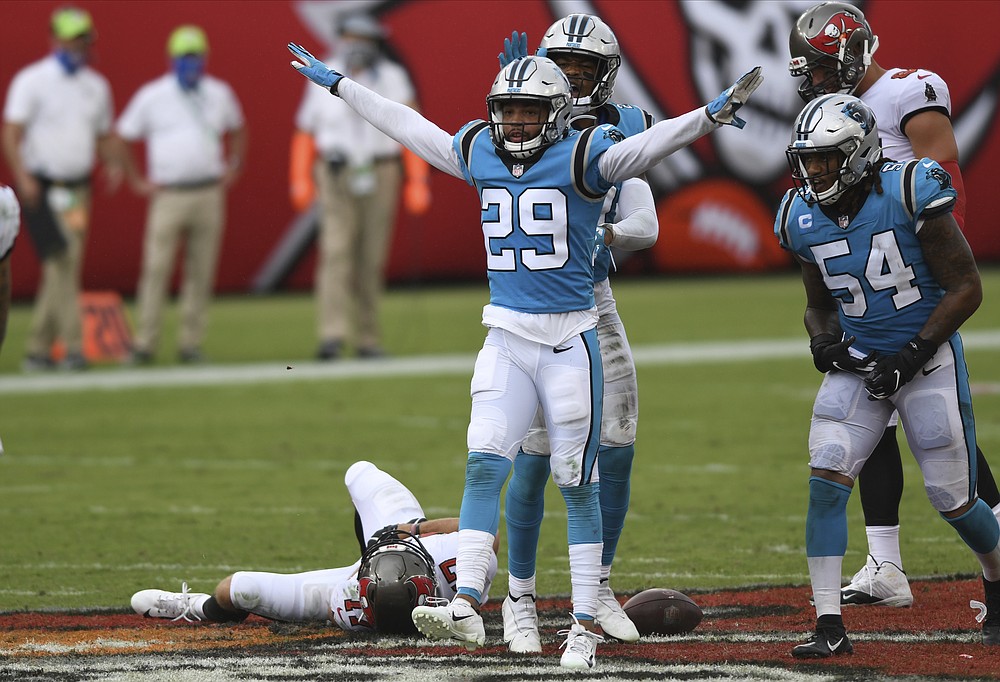 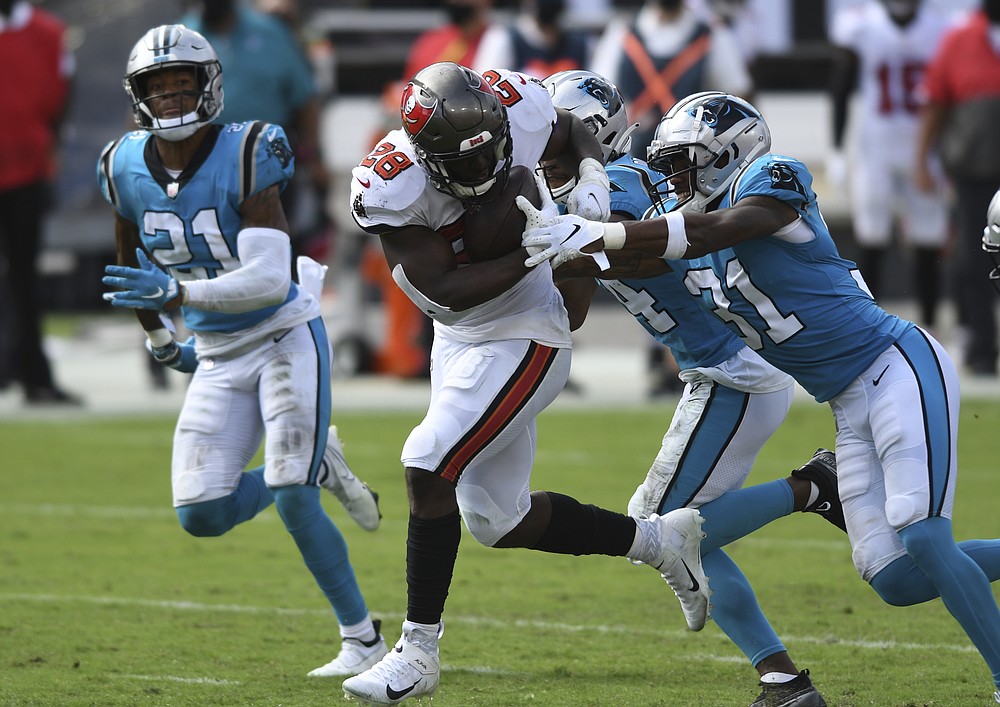 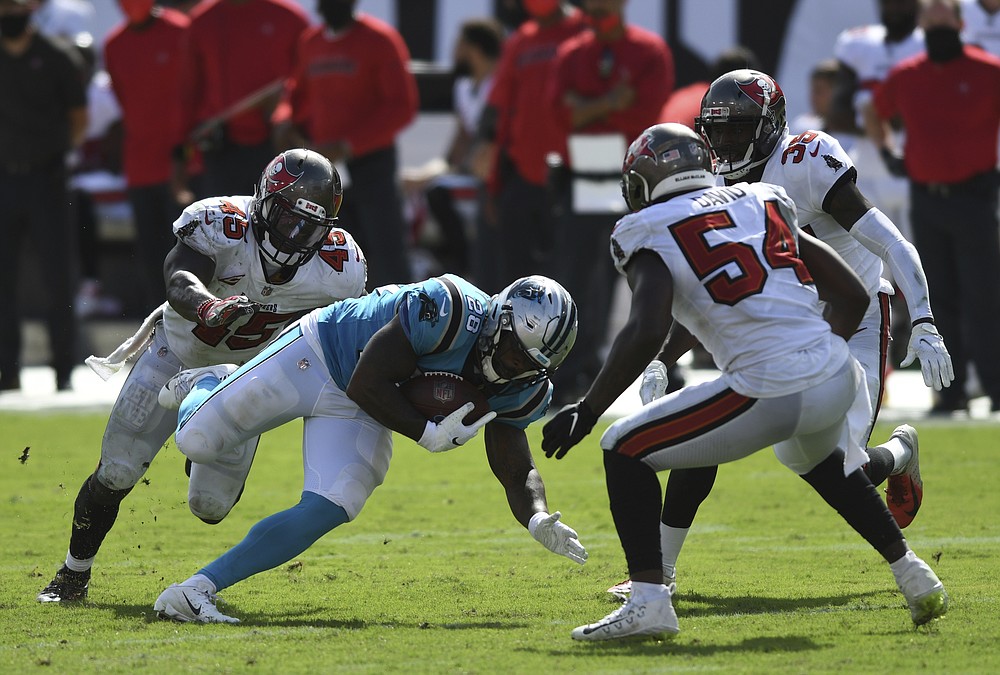