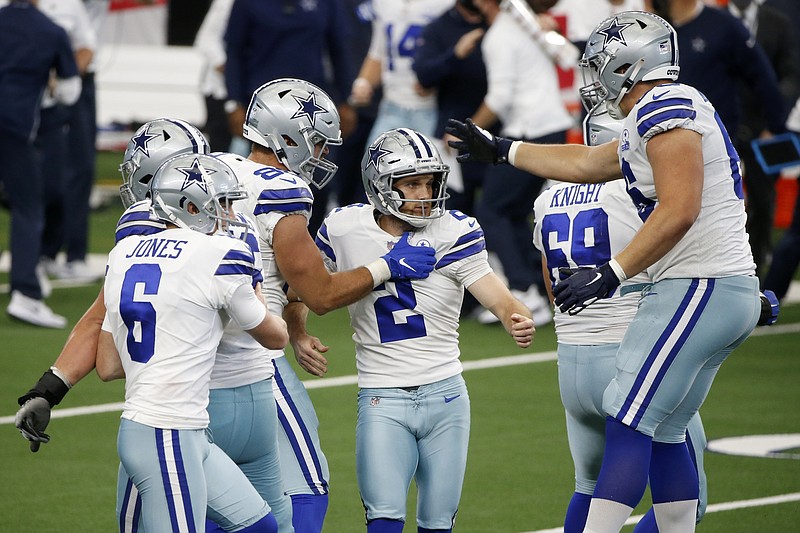 Dallas Cowboys' Chris Jones (6) and others celebrate with kicker Greg Zuerlein (2) after Zuerlein kicked a field goal to help the Cowboys to a 40-39 win against the Atlanta Falcons in an NFL football game in Arlington, Texas, Sunday, Sept. 20, 2020. (AP Photo/Michael Ainsworth)

ARLINGTON, Texas -- One gamble after another failed for Coach Mike McCarthy in his home debut with the Dallas Cowboys.

A successful onside kick made them all moot.

Greg Zuerlein kicked a 46-yard field goal as time expired, and the Cowboys overcame four fumbles and a 20-point deficit in the first quarter to beat the Atlanta Falcons 40-39 on Sunday.

The Falcons were still up 15 in the fourth quarter before Dak Prescott became the first quarterback in NFL history to pass for more than 400 yards and rush for three touchdowns in the same game, the third TD getting Dallas (1-1) within two.

Zuerlein did not use a tee for his slow-rolling onside attempt, a rare tactic. But even more curious was Atlanta's players surrounding the ball when they could have recovered it. As soon as it crossed the 10-yard mark, C.J. Goodwin pounced -- and later emerged from the big pile with the ball and 1:48 on the clock.

Rookie receiver CeeDee Lamb's 24-yard catch got the Cowboys in field goal position, and they ran down the clock before "Greg the Leg" touched off a wild celebration for the players and the socially distanced 21,708 fans who booed Dallas off the field with Atlanta up 29-10 at halftime. The crowd was 27% of AT&T Stadium's 80,000-seat capacity.

"I don't know if I've been in many games like this thing," Prescott said. "But to be able to get the win, and in front of those fans that were there, stayed the whole game, they didn't give up on us. That was a huge difference."

Instead of lamenting just his second 0-2 start -- his only one was his first season in Green Bay in 2006 -- McCarthy celebrated his debut on the Dallas sideline of the venue that hosted his Super Bowl win with the Packers a decade ago.

In his final two appearances in the $1.2 billion retractable-roof stadium with the Packers, McCarthy watched as Aaron Rodgers beat the Cowboys twice in the final seconds, including a divisional playoff game when Prescott was a rookie.

"I had one on the other sideline, but not like this," McCarthy said. "We dug ourselves such a big hole in the first quarter. We're early in the process of our football team finding out about each other each and every day."

Matt Ryan threw four touchdown passes, two off the three lost fumbles from the Cowboys in the first quarter, which ended with Atlanta in front 20-0.

But the Falcons couldn't avoid their first 0-2 start in six seasons under Coach Dan Quinn in a performance reminiscent of their blown 28-3 lead in a Super Bowl loss to New England in Houston to finish the 2016 season.

In the past nine seasons, Atlanta now has two of the three instances in which a team lost after leading by at least 15 points with less than eight minutes remaining in the fourth quarter.

"It's tough to put a loss like that in place," Quinn said. "I told the team there has to be a lesson in the pain of that loss. We'll work into that as we put in preparation for next week, but definitely that one stings."

The successful onside kick for Dallas came after two failed fake punts and another gamble that didn't work when McCarthy went for the two-point conversion before the final touchdown the Cowboys would have needed to get even.

Playing without both of his starting tackles, Prescott was 34 of 47 for 450 yards and a touchdown with one sack. It was his first game with multiple rushing TDs. The two-time Pro Bowler is the franchise leader for rushing scores from a QB.

Prescott's first two TDs got Dallas within five in the third quarter. Ryan responded by converting a third down with a 22-yard pass to Hayden Hurst, who had a 42-yard touchdown on another first-quarter blunder from Dallas, a blown coverage.

After a 19-yard completion to Julio Jones on fourth-and-2, Russell Gage scored on an 8-yard throw for a 36-24 lead. Ryan had 273 yards passing a week after getting 450, second-most of his career.

The Falcons pushed the lead to 39-24 on Younghoe Koo's fourth field goal with just under eight minutes left.

"We're definitely a better finishing team than we showed today," Jones said. "We're still positive, a very positive team. We're not going to let it define who we are, we've just got to keep getting better." 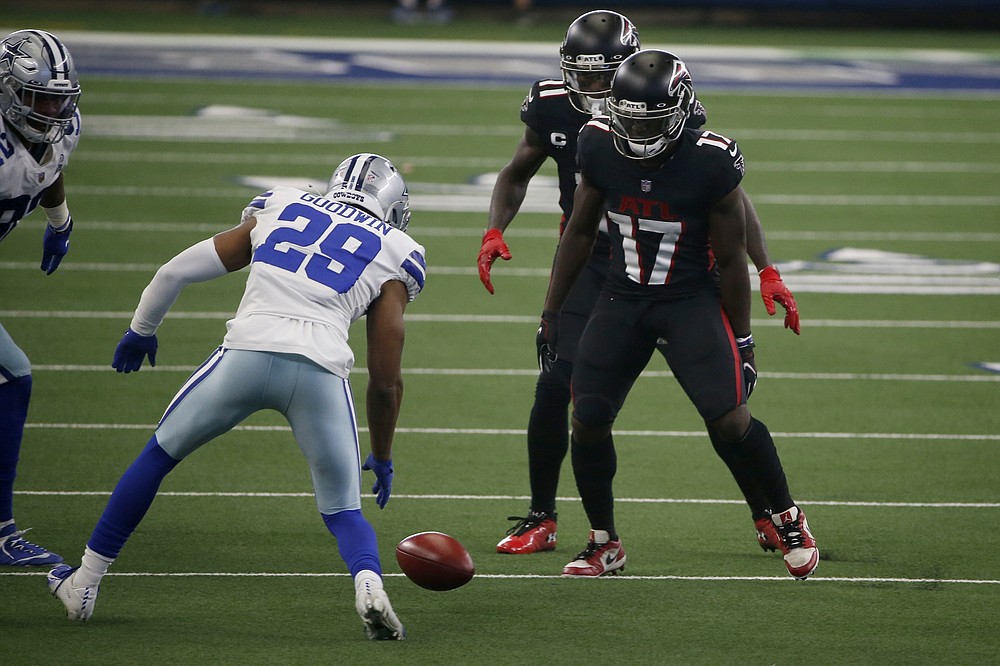 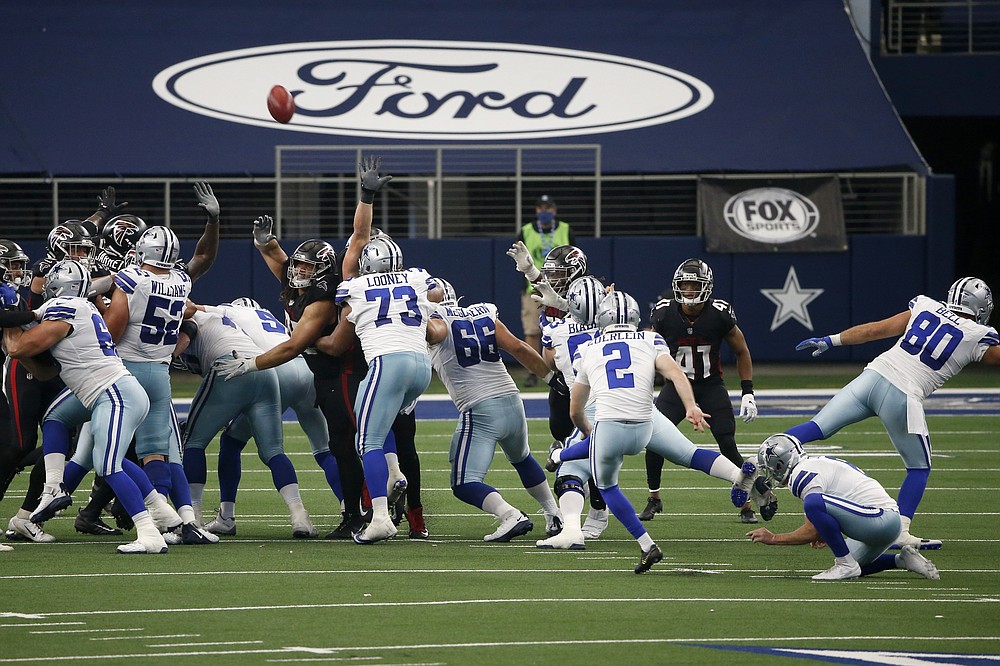 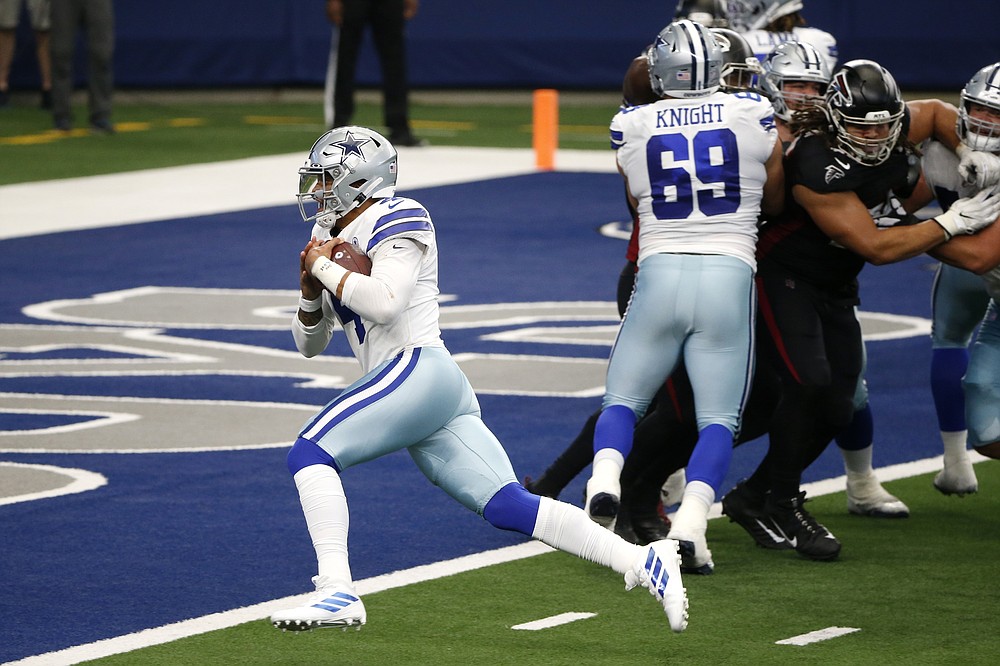 Dallas Cowboys quarterback Dak Prescott (4) reaches the end zone for a touchdown as Brandon Knight (69) provides coverage against the Atlanta Falcons in the second half of an NFL football game in Arlington, Texas, Sunday, Sept. 20, 2020. (AP Photo/Michael Ainsworth) 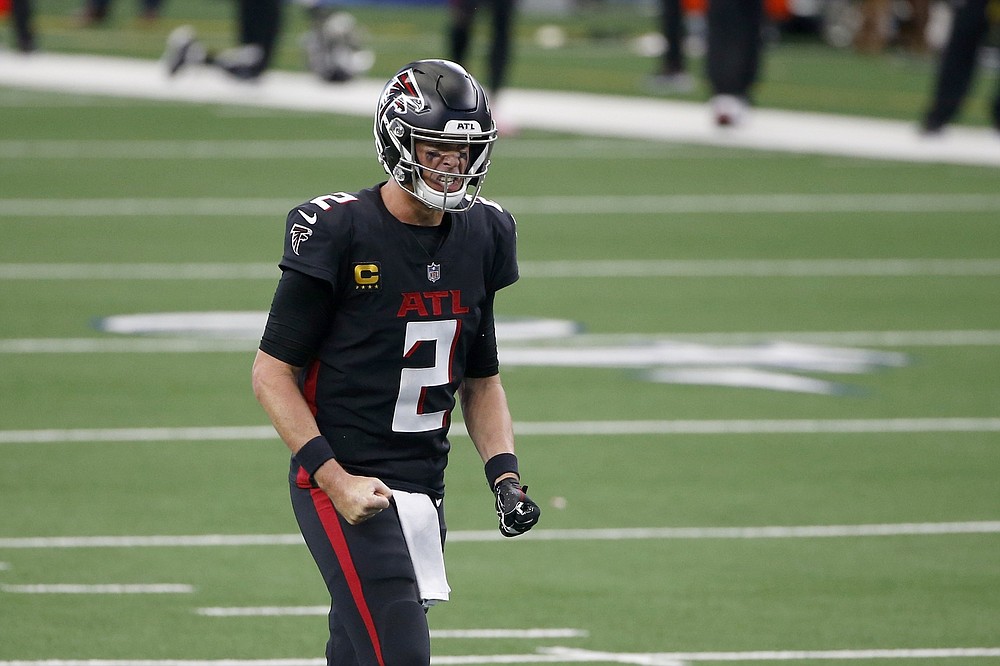 Atlanta Falcons quarterback Matt Ryan (2) celebrates after throwing a touchdown pass in the second half of an NFL football game against the Dallas Cowboys in Arlington, Texas, Sunday, Sept. 20, 2020. (AP Photo/Ron Jenkins) 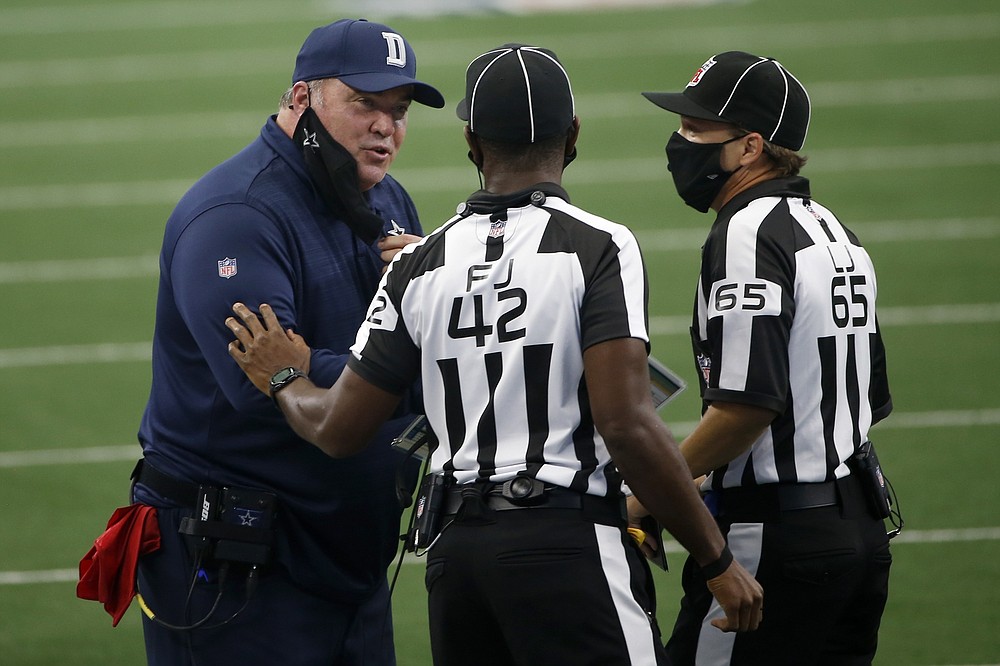 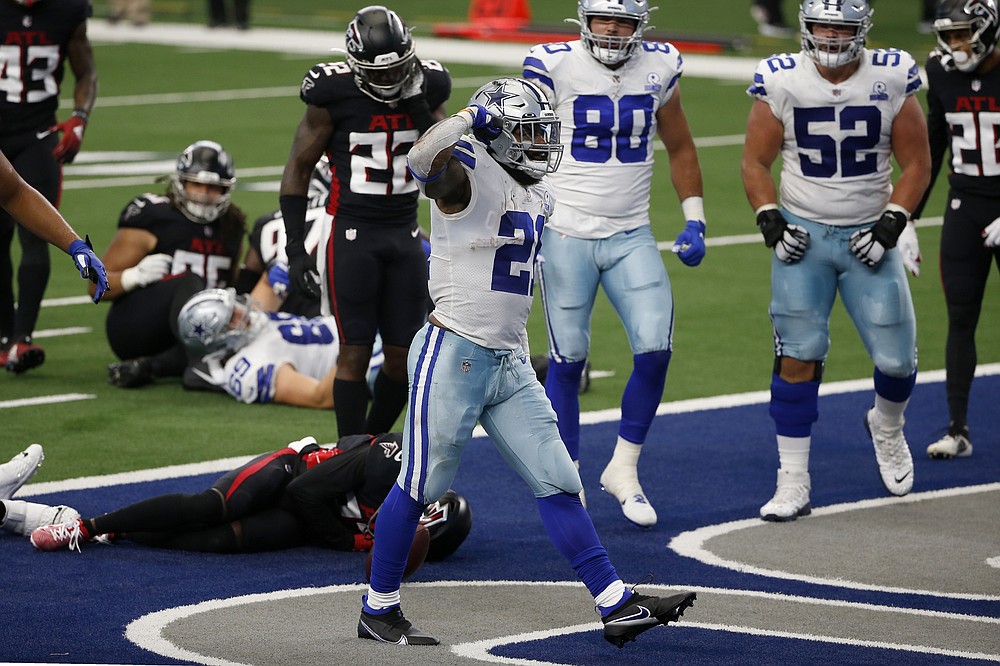 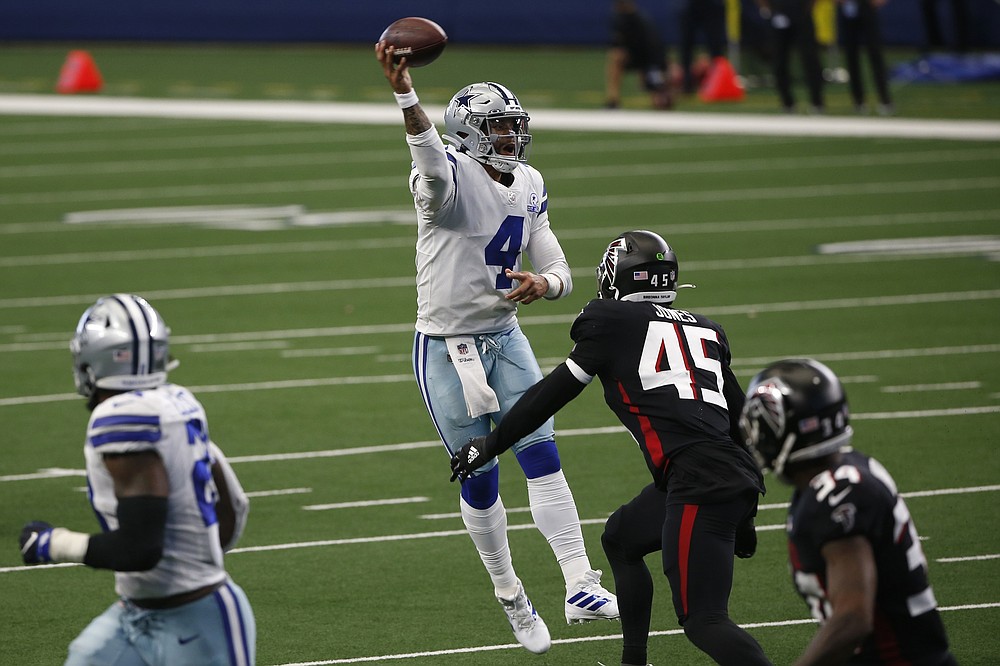