OLD NEWS: Influenza was an old foe long before 1918 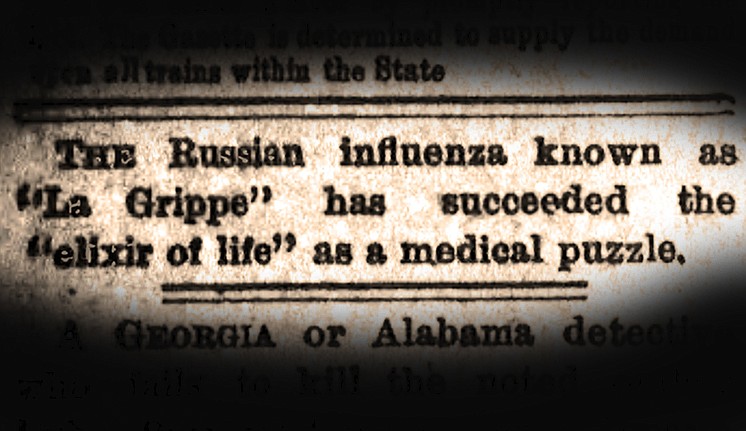 There might be a tendency among those of us who put only so much stock in history to imagine that influenza originated in 1918. Out of the Great War came this pandemic that killed tens of millions of humans organically, interfering with their attempts to kill one another in a manmade fashion.

But varieties of influenza, a sudden-onset ailment of the respiratory sort, had been around before 1918, causing epidemics before the Big One. For instance, long before the Spanish Flu, in the 1870s and '80s, Americans were very familiar with "the Russian flu."

"Influenza," sans country, was listed in the Arkansas Gazette even earlier, in advertisements for cure-alls such as Hungarian Balsalm of Life. This whatever-sort-of-alcohol-it-was could be purchased in December 1868 at Little Rock from the McAlmont & Stillwell store. Besides "influenza," the balsalm supposedly cured "consumption, asthma, coughs, colds, spitting of blood, bronchitis, hoarseness, palpitation of the heart, chronic pleurisy, paraphrenitis, difficulty of breathing, quinsy, whooping or chin cough, angina pectoris, croup, pains and weaknesses of the breast, shortness of the breath, pain in the side and chest ... general debility and all other diseases proceeding from pulmonary organs."

In the late 1880s, the Russian flu was prevalent in Chicago, where it sent people to bed and sometimes killed them. Some people even blamed it on Chicago. One doctor was puzzled when an opera singer told him that she had "Chicago Grip."

"Don't you know what the Chicago Grip is?" she replied. "We all have it when we visit Chicago. We take cold and sneeze, our eyes water, our noses run, our throats are affected, and we sing at a great disadvantage. Whenever we are at Chicago or Pittsburgh we expect to have this trouble and it is known among professional singers as the 'Chicago Grip.'"

That doesn't sound quite like the flu we know. But judging from other newspaper accounts from the late 19th century, Russian influenza does. It was a respiratory illness characterized by sudden fatigue, high fever, muscle aches, chills and a frontal headache. Its nickname was "la grippe."

I wasn't so familiar with Russian flu when I came across this seemingly astute analysis in the Dec. 21, 1913, Gazette. I have no idea whether it also was highly accurate, but I want it to be. It was a "Special Cable to the Gazette Through the International News Service."

I like it so much, I will now give it to you verbatim:

Grip Is a Disease Without a Country

All Nations Repudiate Malady: Each Blaming Other Kingdoms

London, Dec. 20. — The grip is a disease without a country, according to a new book just issued which is devoted to the malady. Every country tries to make it out a native of another land.

In Russia, it is called Serbian fever, and in Serbia, Chinese fever. In France, it has been called Spanish catarrh, and Spain throws it back as Russian fever.

The term influenza came to be generally applied in England to the disease, which was successively known as "the new acquaintance," "the gentle correction," "the new delight" and "the knock-me-down fever," by a mistake.

Eighteenth-century Italian writers say Dr. Hopkirk spoke of "una influenza di freddo" (influence of cold), and English physicians, mistaking the word influenza for the name of the disease itself, used it. The same term is also used in Germany, where a host of dialect names still prevail, such as lightning catarrh and fog plague.

The following is a list of some of the names of influenza in different countries:

Spain — Influencia Rusa, pantomima, trancazo (a blow with a bar).

The Spanish name "trancazo" is curious, and occurs also in France, where the disease was at one time called le tac or le horion, both meaning a blow on the head.

The superstitious considered that the epidemic was a punishment by Providence visited on those who persisted in singing a particularly ribald song then much in vogue, and when anyone was seized with influenza, his friends remarked: "Ah! You have sung the song."

Considering the millions and millions of human beings who have “sung the song” in the past two centuries, probably we should be ashamed of ourselves for seeing anything humorous in words like snuffieber and modefieber. Or flodfeber. Or snuesyge.

[RELATED: How the Arkansas Gazette and Arkansas Democrat reported the 1918 pandemic]