WATCH YOUR LANGUAGE! We like to rhyme most of the time 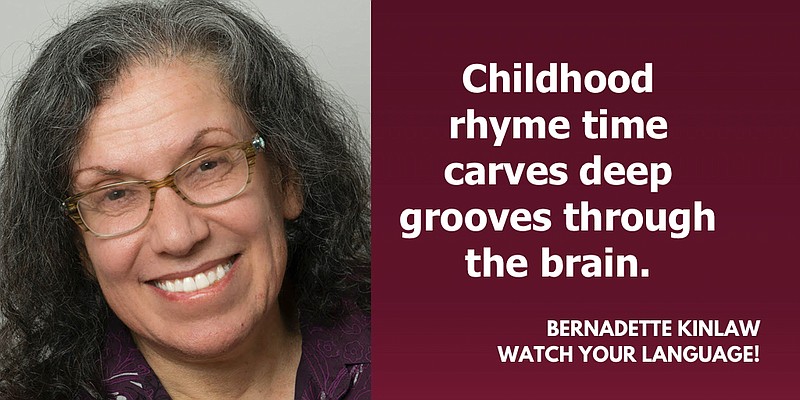 While I love a good Dr. Seuss book, I've never thought much about rhymes.

In "Green Eggs and Ham," Sam clearly wants the person he's jamming with to try the green eggs and ham. He gets only pushback.

Nursery rhymes are aptly named. You learn lots of rhyming tales when you're still a kid hanging out in the nursery.

Most of us know that Jack and Jill went up the hill and that Jack Sprat would eat no fat. Years later we hear that "Ring around the Rosie" is about the Great Plague. Then we consult Snopes and learn it really isn't, and that's such a relief.

A few parenting sites I read said rhyming teaches kids how our language works. It helps them learn the rhythms, sounds and flow of words. I can remember witnessing a parent or two reading the first couple of words in a line and hearing a child chime in with the last word to make each line rhyme.

But as always with studies about children, I remain cynical about the results until actual kids tell me that rhyming helped them to learn how to read.

Once you hit your teen years, are rhymes a big part of your life?

I think many of the rhymes in everyday life are in music. I'm often amazed at the number of song lyrics I have memorized yet I can't remember many of my neighbors' names. Apparently rhymes help us remember things.

I wonder, though, if it's the melody and not the rhymes helping people remember. (Though I have no proof.) I'm always so proud that I remember the first couple of lines of a Bruce Springsteen song, "Racing in the Streets" despite knowing almost nothing about cars:

Fuelie heads and a Hurst on the floor

(I learned recently that that combination of car parts wouldn't work, but I don't care.)

I know that scientists have studied music's effect on memory in people with Alzheimer's and other forms of dementia. A person who seems to be in a fog will hear a song and begin belting out the words. I've seen this happen in person, too. One theory is that the part of the brain that stores musical memory isn't affected by dementia. This seems magical to me.

Outside of music, we have rhymes to help us remember important things.

Do you wonder if the plant you're about to touch is poison ivy?

Leaves of three, let it be.

Does this month have 30 days?

An apple a day

Keeps the doctor away

To help with pronunciations, we have:

The first one does the talking

(In English, this is only true some of the time. In words such as road and toad, the o does the talking. But the first one does no talking in aisle and height.)

Benjamin Franklin taught us this:

Early to bed and early to rise

(I'm sure he meant to include women in there.)

Then we have the phrases that rhyme for no apparent reason. These are called rhyming reduplications, and the list of examples is endless.

Also, we have the specialized and slightly goofy reduplication, which involves removing the first letter of the word and replacing it with "shm" to let others know some disdain or defiance is felt:

My in-laws' house is fancy shmancy.

During lockdown, I say diet shmiet!

And we have the rebels in the language: the words that rhyme with nothing else.

My late husband always loved to tell people that no word rhymes with orange.

Other words like this are opus, wolf, silver, purple, ninth, month, dangerous and discombobulate. No big surprise that that last one doesn't have a rhyme.

A friend recently asked me whether I own a rhyming dictionary. I don't, and it could be because I never tried to write poetry or lyrics. Still, it feels like such a thing would be cheating. It's as if I've been assigned to read "Of Mice and Men" in a class, and I instead I read the Cliffs Notes.

Maybe I'm too judgmental, though. Does anyone out there regularly use a rhyming dictionary?

Sources include How Stuff Works, Snopes, Flocabulary, The Measured Mom, What We Do All Day, India Today, Live Science, Poetry4Kids. Reach Bernadette at