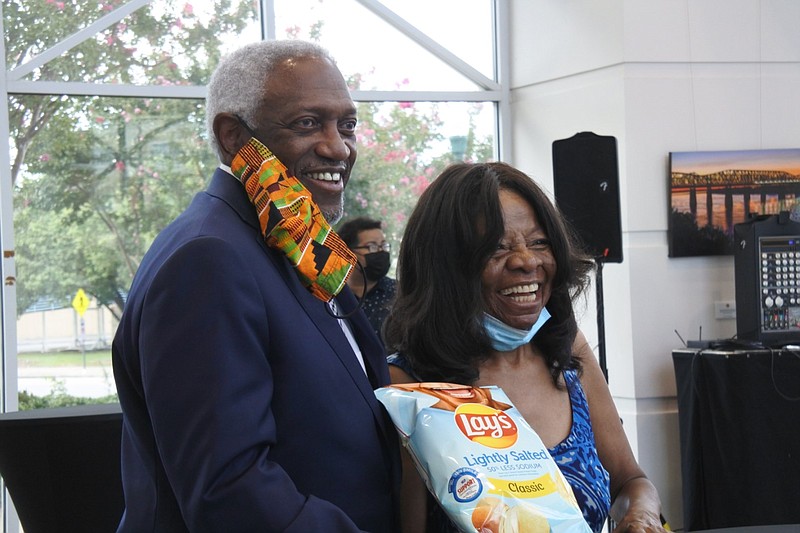 Fort Smith Mayor George McGill (left) stands with Charolette Tidwell, founder and executive director of Antioch for Youth and Family, on Tuesday, Sept. 15, 2020, during a Fort Smith reception in Tidwell's honor. Tidwell is one of 30 people chosen for the Smile with Lay’s campaign. The two are holding a bag of Lay’s classic lightly salted chips with Tidwell's smile on the bag. (AP / Thomas Saccente )

FORT SMITH -- People walking down the chips aisle of their local grocery store may find a local Arkansan smiling back at them.

Charolette Tidwell, a retired nurse who founded the Fort Smith nonprofit organization Antioch for Youth and Family in 1999 and serves as its executive director, was one of 30 people from across the country to be selected for the Smile with Lay's campaign, according to Frito-Lay North America. The bottom half of her smiling face can be seen on bags of Lay's classic lightly salted and kettle cooked jalapeno chips.

Born and raised in Fort Smith, Tidwell, 74, said she was "shocked" to be selected due to it not being something Antioch itself pursued. However, she believes in the power of a smile, having learned it in the years she was in health care.

"Two persons enter a conversation, and if one of the persons is smiling, it makes the environment of communication so much better," Tidwell said. "It does lift moods with the endorphin release, but it allows one to engage in a conversation, so I know, through the years, the power of a smile and I know the value of a smile."

Every purchase of a specially designed Lay's Smiles bag supports the donation of Frito-Lay's $1 million commitment to Operation Smile, which the news release states is an international medical charity dedicated to providing access to safe surgical care to those with cleft conditions.

The smiles featured on these bags are those of 30 "'ordinary' people doing extraordinary things in their communities," according to the company. These include people who have helped the homeless, veterans, youth, and the elderly, among others. People can also scan the QR codes on these Lay's Smiles bags to access videos of these "Everyday Smilers" sharing their stories.

While Antioch for Youth and Family is technically a food pantry, Tidwell said the organization goes beyond the "usual and customary activities" of one due to it carrying out a host of additional services. This includes, among others, delivering food to public schools and senior complexes in the area, involving children in competitions at various levels and having a drive-thru service for veterans.

"We have done, in the past, large health, wellness and nutrition fairs, and we have a community garden, a 2.5-acre community garden," Tidwell said. "And when we get out of this covid situation, we have placed in our facility a nutrition center, which is a fully functioning area where we will teach cooking classes, and we will have the students that we trained to also assist clients with the selection of foods."

Tidwell estimated that, with the ongoing covid-19 pandemic, Antioch serves somewhere between 25,000 and 30,000 people per month through its programs.

Covid-19 forced Frito-Lay to change its approach to its campaign. Instead of Frito-Lay bringing the selected participants to Dallas for an in-person "VIP photo and video shoot experience," the release states participants were sent detailed instructions to capture self-portraits with their phones. These pictures were then professionally enhanced before being transferred onto the bags, with more than 70 bag designs being created.

"Having pored through thousands of nominations and already being personally committed to these Smiles ourselves, particularly now when people are looking for more reasons to smile than ever before, we knew we couldn't let a canceled photo shoot keep Lay's from sharing these inspiring stories with the world," said Sadira Furlow, vice president of marketing for Frito-Lay North America.

Katie Ceclan, marketing senior director at Frito-Lay, said via email that the Smiles bags are available in stores across the country and will remain while supplies last. They began arriving earlier this month.

Tidwell's work has recently received local recognition as well. At a reception held in her honor on Tuesday, Fort Smith Mayor George McGill thanked Tidwell for what she has done in the River Valley, congratulated her for being selected for the Smile with Lay's campaign and urged those present to support Antioch.

"Charolette has done more than feed people food," McGill said. "She's challenged our children to be the very best. Charolette has taught our children to speak in public. Many of her students that she's taught and trained have gone on to win awards when it comes to public speaking. She takes care of the elderly. She takes care of this community, and we love her for that. ..."

Tuesday's reception preceded the Fort Smith Board of Directors meeting that same night, which began with Tidwell being presented with the official key to the City of Fort Smith in recognition of her service.