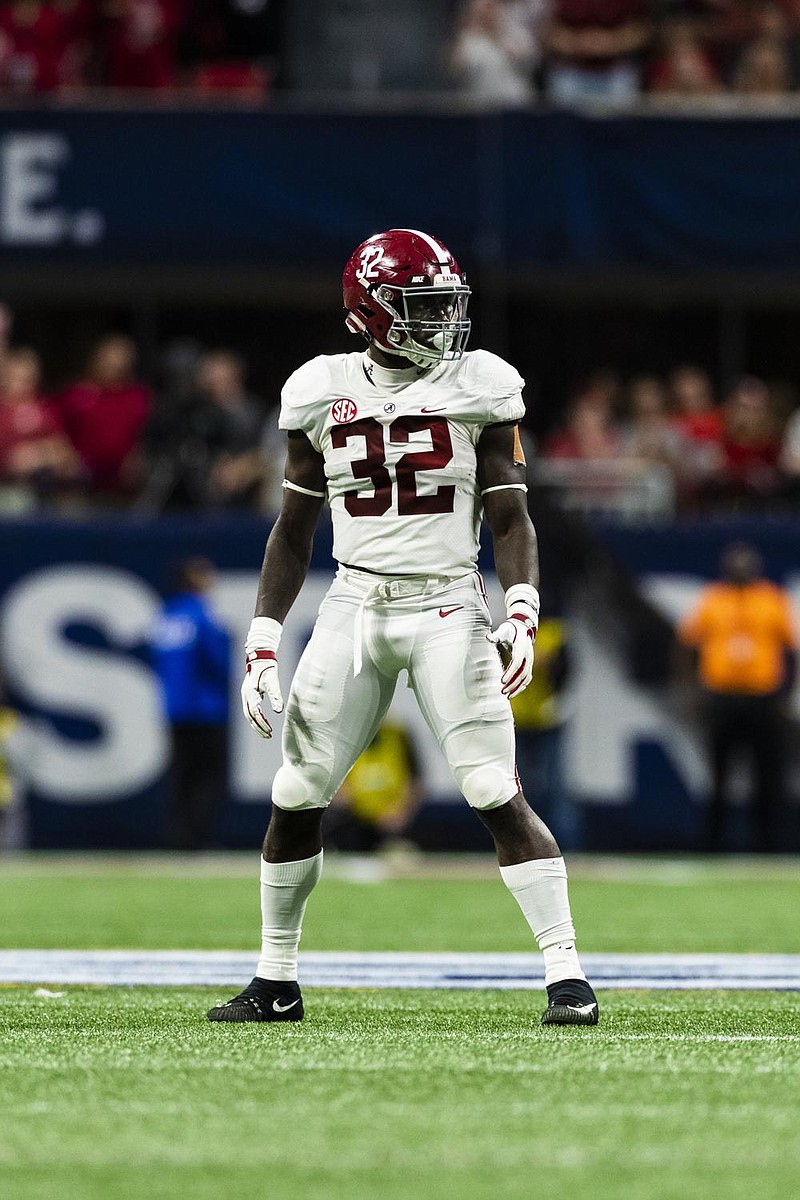 The second-ranked Crimson Tide struggled at times amid a wave of injuries, losing players like middle linebacker Dylan Moses and defensive end LaBryan Ray for all or most of the season. Golding, Alabama's defensive coordinator, and his defenders expect better this season.

In some ways, those injuries might help Alabama's defense return closer this season to its more typical status as a gold standard in the SEC and nationally. The Tide open Saturday at Missouri with Moses returning, plus there's a measure of added motivation.

Fellow inside linebacker Josh McMillon, who like Moses missed the season with a knee injury, received a sixth year of eligibility from the NCAA. Also back are Ray (foot) and nose guard DJ Dale, who missed the last three games with a lower leg injury.

Relying heavily on youngsters because of injuries and annual attrition, the Tide struggled at times defending the run and yielded a combined 94 points in shootout losses to eventual national champion LSU and Auburn.

The result: The Tide's first shutout from the College Football Playoffs. And some extra motivation in an offseason upended by covid-19 for Moses & Co.

"I want to be able to put a punctuation mark on the back end of my Alabama career," said Moses, a 2018 finalist for the Butkus Award given to the nation's top linebacker. "At the same time, I want to be able to affect my teammates. That's the reason I came back.

"I care about them, I love them, and they love me so I want to affect them and get us back like we used to be."

Alabama allowed 18.6 points per game nationally last season, good enough for 13th nationally. But it's still the most the Tide have given up since 2007, Coach Nick Saban's first year in Tuscaloosa. Alabama has led the nation in scoring defense four times since then but allowed 18-plus points on average two years in a row.

It's still strong by most standards but a dramatic departure from the 2011 defense that yielded 8.15 points per game and produced five first-round draft picks.

Of course, there was the usual exodus to the NFL where five defenders were drafted either in the second or third round. Two of the defense's big names -- Moses and cornerback Patrick Surtain III -- are back, along with potential stars like Ray and linebacker Christian Harris.

With prolific quarterback Tua Tagovailoa gone to the Miami Dolphins, along with two first-round wide receivers, Alabama will likely need a stronger defense to contend nationally.

Saban said the defense needs improved leadership and to play better both against the run and in the red zone. Moses can provide some of that leadership.

"But we just have to get more physical at the line of scrimmage," Saban said.

And the Tide must replace four starters in the secondary with scant starting experience around Surtain. Safety Jordan Battle (four starts as a freshman last season) and cornerback Josh Jobe (two career starts) are the only defensive backs besides Surtain to have started multiple games. Newcomers like Brian Branch and Ronald Williams could play early roles in the secondary.

But it's the veterans who want to exorcise last season's demons. McMillon said that goal made his decision to return easy, though he already has a degree in mechanical engineering.

"It was just a bad taste left in my mouth, from the past year," McMillon said. "Going 11-2, I don't want to end my college career on a bad note like that. I don't think anyone who came to the University of Alabama would want to end like this.

"Being here, being a leader, seeing other guys in the past and not living up to their standard, it didn't feel right leaving." 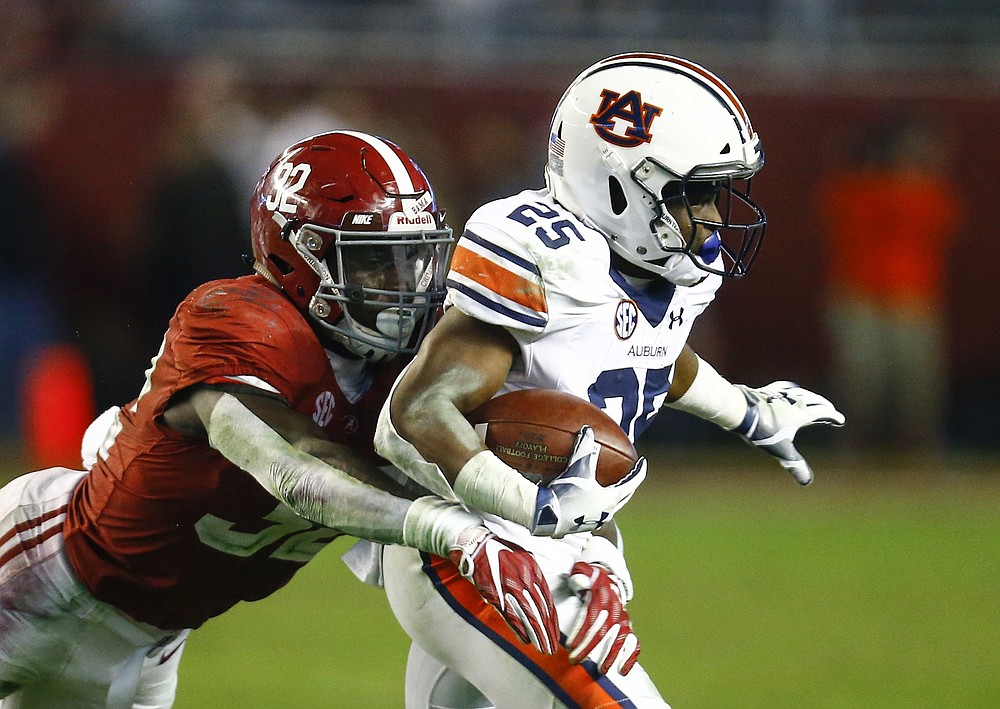 FILE - In this Nov. 24, 2018, file photo, Auburn running back Shaun Shivers (25) is tackled by Alabama linebacker Dylan Moses (32) during the second half of an NCAA college football game in Tuscaloosa, Ala. The Tide opens next Saturday at Missouri with Moses returning when he might otherwise have left for the NFL. (AP Photo/Butch Dill, File) 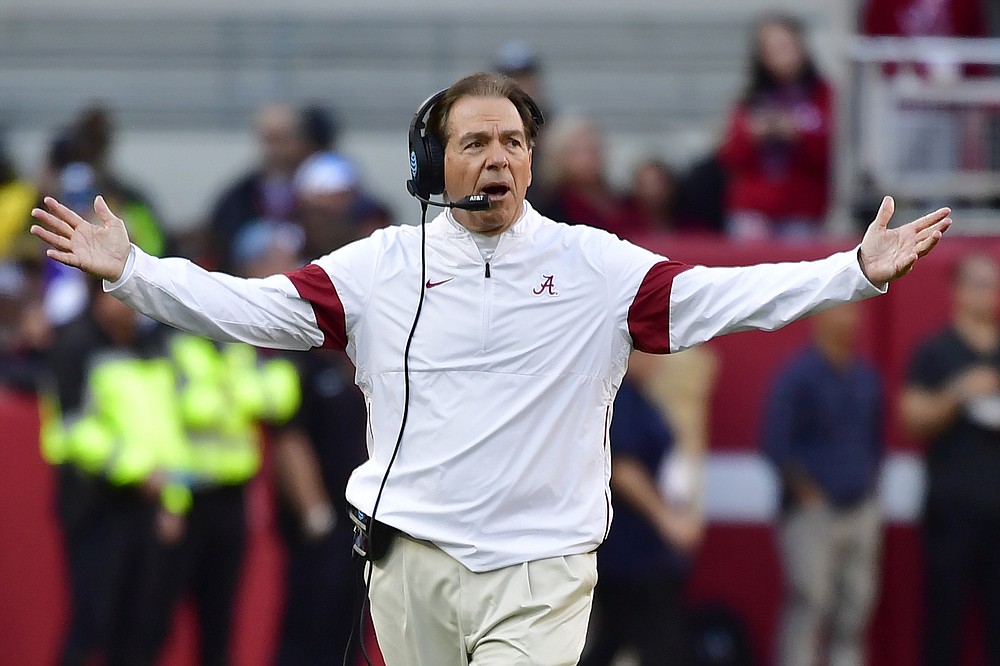 FILE - In this Nov. 9, 2019, file photo, Alabama coach Nick Saban reacts during the first half of the team's NCAA college football game against LSU in Tuscaloosa, Ala. Alabama allowed 18.6 points per game nationally last season, good enough for 13th nationally. But it’s still the most the Tide has given up since 2007, Saban’s first year in Tuscaloosa. (AP Photo/Vasha Hunt, File) 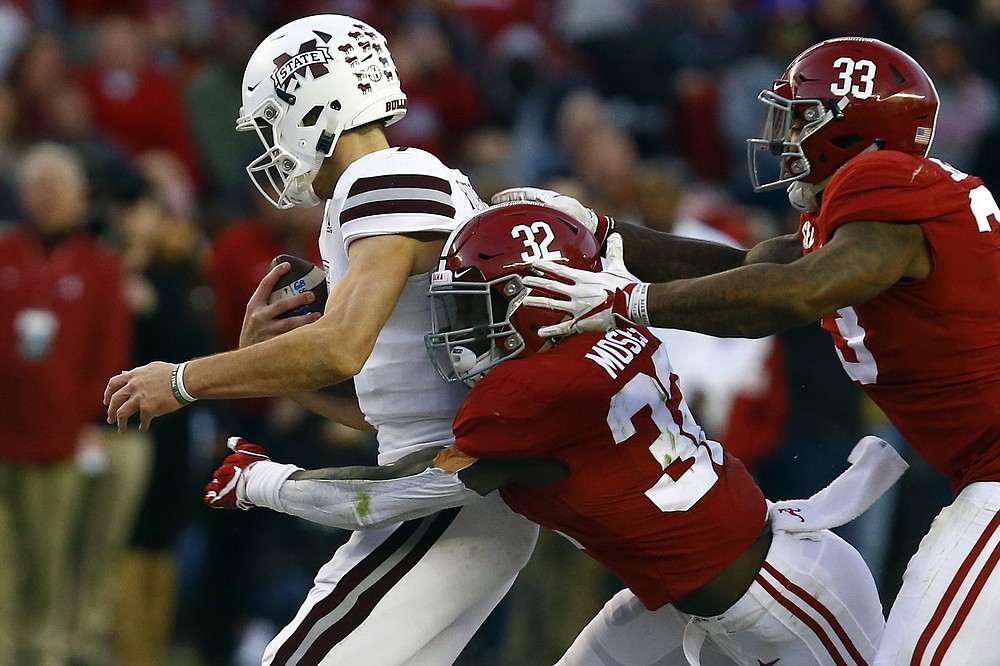 FILE - In this Nov. 10, 2018, file photo, Mississippi State quarterback Nick Fitzgerald (7) is sacked by Alabama linebacker Dylan Moses (32) and linebacker Anfernee Jennings (33) during the second half of an NCAA college football game, in Tuscaloosa, Ala. Dylan Moses is a candidate for the Bednarik Award, as the defensive player of the year. (AP Photo/Butch Dill, File)
ADVERTISEMENT