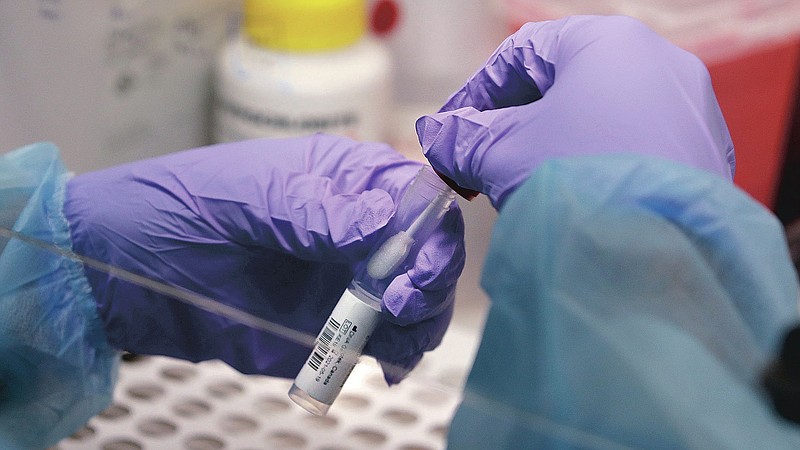 WASHINGTON -- The Centers for Disease Control and Prevention on Monday removed language from its website that said the novel coronavirus spreads through airborne transmission, the latest example of the agency backtracking from its own guidance.

The agency said the guidance, which went up Friday largely without notice until late Sunday, should not have been posted because it was an early draft.

"Unfortunately an early draft of a revision went up without any technical review," said Jay Butler, the CDC's deputy director for infectious diseases. "We are returning to the earlier version and revisiting that process. It was a failure of process at CDC."

[Video not showing up above? Click here to view » https://www.youtube.com/watch?v=digmw1l7f58]

Evidence that the virus floats in the air has mounted for months, with an increasingly loud chorus of aerosol biologists pointing to super-spreading events in choirs, buses, bars and other poorly ventilated spaces. They cheered when the CDC seemed to join them in agreeing that the coronavirus can be airborne.

Experts who reviewed the CDC's Friday post had said the language change had the power to shift policy and drive a major rethinking on the need to better ventilate indoor air.

Jose-Luis Jimenez, a chemistry professor at the University of Colorado at Boulder who studies how aerosols spread the virus, told The Washington Post before the CDC reversed its guidance that "this is a good thing, if we can reduce transmission because more people understand how it is spreading and know what to do to stop it."

Although CDC officials said Friday's post was a mistake, Democratic lawmakers were incredulous. Rep. Raja Krishnamoorthi, D-Ill., tweeted Monday that he would investigate why the language had been scrubbed.

The agency had posted information Friday stating that the virus can be transmitted over a distance beyond 6 feet, suggesting that indoor ventilation is key. Whereas the agency previously warned that the virus mostly spreads through large drops encountered at close range, it now said "small particles, such as those in aerosols," were important vectors.

"Airborne transmission is plausible and, I would say, possible," Butler said. But he said data did not suggest that the virus is spread primarily through the air, unlike diseases such as tuberculosis.

Butler said the Friday guidance overstated the agency's stance on airborne spread. "If I did not know any better, I would think that we were saying that airborne transmission is very important, if not the main mode of transmission," he said. "That does not reflect our current state of knowledge."

If airborne spread were the main route, Butler said he would have expected the disease to travel even faster around the globe than it did. "The epidemiology seems pretty clear that the highest risk is in household contexts," he said, meaning through the proximity of one family member or roommate to another.

Sudden flip-flops on public guidance is antithetical to the CDC's rules for crisis management. After disastrous communications during the 2001 anthrax attacks, the agency created a 450-page manual outlining how U.S. leaders should talk to the public during crises.

Protecting vulnerable people from a virus that is infecting millions depends on U.S. leaders issuing clear public-health instructions and the public's trust to follow directions that could save their lives.

It was also the latest disorienting turn in a scientific debate with enormous public consequences for how Americans return to schools and offices. The debate is over whether the extreme infectiousness and tenacity of the coronavirus is because of its ability to spread well over 6 feet, especially indoors, in small particles that result from talking, shouting, singing or just breathing.

Many experts outside the agency say the pathogen can waft over considerably longer distances to be inhaled into our respiratory systems, especially if we are indoors and air flow conditions are stagnant.

"Poor ventilation can play a major role in super-spreading events when individuals unaware that they are shedding virus, and are highly contagious, spend a long time in a crowded indoor environment where most people are not wearing masks," said Shelly Miller, a professor of mechanical engineering at the University of Colorado at Boulder who focuses on the quality of indoor air.

"There was a lot of confusion early on because WHO said adamantly that the disease is not airborne. There's also, somehow, a higher bar of proof required for a disease to be officially considered to transmit through the air," added Virginia Tech civil and environmental engineering professor Linsey Marr. "That's due to historical bias, I think, and the fact that you can't see aerosols."

Jimenez said a default assumption exists among public health experts that airborne transmission is rare in the world of pathogens. For other diseases, it required decades of research to overcome that assumption, he said, as was the case with measles and tuberculosis, both of which were originally assumed to be passed by large droplets. Experiments with sneezing guinea pigs, conducted by Richard Riley and his colleagues at Johns Hopkins University in the 1950s, ultimately helped convince the medical field that tuberculosis was airborne.

In July, Marr, Miller, Jimenez and more than 200 of their colleagues sent a letter about airborne coronavirus transmission to the World Health Organization, which responded by acknowledging the "emerging evidence" that the pathogen can spread through the air.

As the U.S. closed in on 200,000 coronavirus deaths Monday, the crisis deteriorated across Europe.

In the U.S., health authorities were deeply worried about the resumption of school and college and the onset of cold weather, which will force more people indoors. A widely cited model from the University of Washington predicts the U.S. death toll could double to 400,000 by the end of the year.

In Britain, Prime Minister Boris Johnson today is expected to announce a round of restrictions to slow the spread of the disease. British Chief Medical Officer Chris Whitty warned that cases are doubling every seven days and could lead to a rise in deaths in the coming weeks.

The chief medical officers of England, Scotland, Wales and Northern Ireland raised the nation's covid-19 alert from three to four, the second-highest level.

"We have, in a very bad sense, literally turned a corner," with weeks of rising infections, Whitty said.

In France, where infections reached a record high over the weekend, health authorities opened new testing centers in the Paris region to reduce lines and delays.

The Norwegian capital of Oslo banned gatherings of more than 10 people in private homes after a spike in cases and strongly urged people to wear masks on public transportation.

Authorities said that starting Wednesday, an estimated 860,000 residents must be able to show that their trips out of their neighborhoods are justified for work, study or medical reasons or face fines. Parks are closed and shops and restaurants in the affected zones are limited to 50% occupancy.

An $18 billion initiative to deploy future covid-19 vaccines around the world is moving into the next phase with 156 countries and regions taking part, but China joining the U.S. on the sidelines, at least for now.

While China wasn't on the list, 38 governments are expected to sign up in the coming days, according to a statement Monday from Gavi, the Vaccine Alliance. The group is leading the effort, Covax, along with the World Health Organization and the Coalition for Epidemic Preparedness Innovations. The U.S. has said it won't participate.

The goal is to have 2 billion doses available by the end of the year and to focus initially on protecting health-care workers and people at higher risk.

Beijing has focused on cutting one-on-one deals for vaccine doses. Signing up to Covax was seen as a possible way for China to help repair its image around the world over how it handled the initial coronavirus outbreak and fill a void left by the absence of the U.S. WHO and Gavi officials said discussions with China are continuing.

A number of other countries including the U.S. are crafting their own deals to obtain vaccines, sparking concern that poorer regions will be left behind.

​​​​​Information for this article was contributed by Ben Guarino and Chris Mooney of The Washington Post; by James Paton of Bloomberg News; and by Danica Kirka, Sylvie Corbet, Kirsten Grieshaber, Jan M. Olsen, Karel Janicek, Aritz Parra, Nicole Winfield and Tammy Webber of The Associated Press.