Take weeknight shrimp to the next level with juicy cherry tomatoes 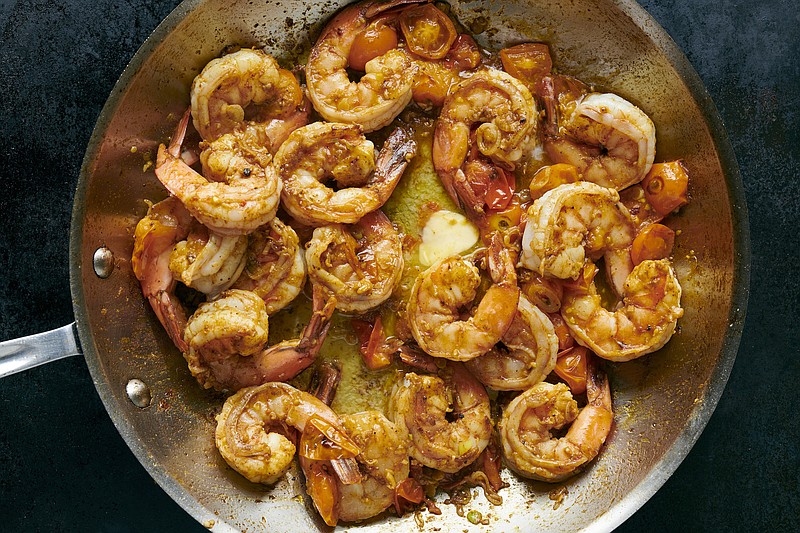 Adding a handful of tomatoes to this take on shrimp scampi makes for a bright, full-flavored meal that’s speedy and complex. (The New York Times/David Malosh)

For the occasional shrimp eater, it can be hard to get past the scampi trap.

After all, if you're not cooking shrimp very often, why stray from it? With its buttery, garlicky, wine-kissed sauce, shrimp scampi is arguably the most perfect way to savor the crustaceans.

But, as excellent as the combination of shrimp, butter and garlic may be, it does lack one quintessentially shrimp-friendly ingredient: juicy ripe tomatoes. And adding a handful of small Sungolds (or other cherry tomatoes) to your skillet — along with plenty of that garlic and butter — makes for a bright, full-flavored meal that's speedy and complex.

Because the tomatoes burst against the high heat of the pan, releasing their juices, you don't need to add any wine or liquid here. Some grated fresh ginger, along with a little lime squeezed on top at the end, give the dish enough sharpness to balance the sweetness of tomatoes and shrimp.

The lime is especially important if you do use the Sungolds, though. This low-acid, orange-hued variety can have a concentrated, sugary character, especially when very ripe. Gradually squeeze in the lime, tasting as you go, and don't stop until the flavors shimmer on your tongue, darting between bracing and bold, mellow and buttery.

Then there are the spices, which add an aromatic dimension to the mix. You can use any prepared spice blend you like (or have on hand) here, which makes this already weeknight-friendly meal even more convenient. Garam masala, curry powder, Baharat, five-spice powder or a mild chile powder blend will all round out the dish, adding their distinct, deep and earthy notes. Just keep in mind that if you're using a spice mix that's on the fiery side, you might want to cut the amount by ¼ to ½ teaspoon at the beginning of the recipe. Then add more to taste just before serving to give you more control over the heat level.

Or, if you don't have a spice blend on hand, you can cheat by adding ½ teaspoon each ground cumin and coriander, plus ¼ teaspoon each cayenne and cinnamon. Although it won't have quite the nuanced character of a more deliberate blend, it will help you get a tasty and colorful shrimp dinner on the table quickly and easily. And for this delightful one-pan dinner, that's exactly the point.

In a medium bowl, combine spice blend, ginger, garlic, onion whites, ½ teaspoon salt and ¼ teaspoon pepper. Add shrimp and toss well. Heat a large skillet over high heat, then add the oil. Add the tomatoes and ¼ teaspoon salt. Cook until the whole tomatoes burst and the halved ones start to wrinkle, about 2 minutes.

Add shrimp mixture and saute for another 2 to 4 minutes, turning the shrimp, until they are pink all over.

Gently stir in butter and cook for another minute, until the shrimp are cooked through. Remove from heat and add a squeeze of fresh lime juice. Taste and add more salt and spices, if needed. Garnish with mint and onion greens and serve immediately.

Note: If your spice blend is heavy on the chiles, you might want to cut back by ¼ to ½ teaspoon; you can always add more to taste just before serving.