Cincinnati Masonic Lodge to be sold at auction 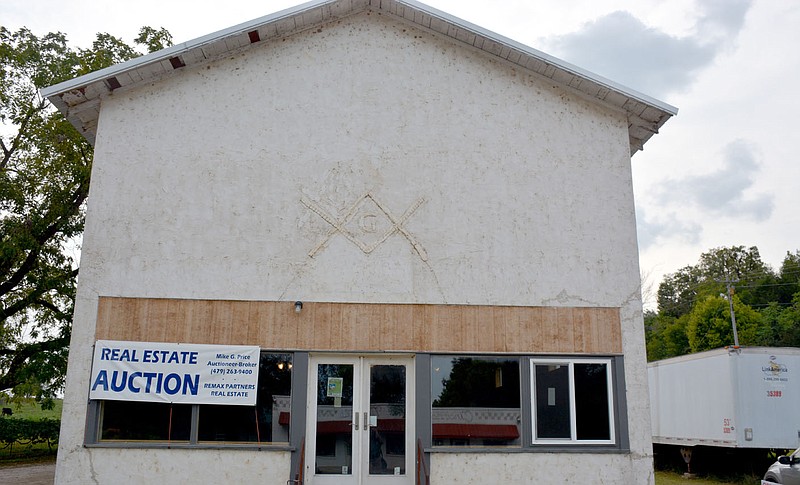 Marc Hayot/Herald-Leader The Masonic Lode in Cincinnati, Ark., will be sold at auction at 12 p.m. on Sept. 25. The building is said to have been built around 1945 and was also used as the community center.

SILOAM SPRINGS -- The old Masonic Lodge in the Cincinnati community will add a new chapter to its history when it goes up for auction at noon on Friday.

The auction will be held at the lodge.

The auction will have coronavirus precautions in place, according to auctioneer Mike Price. People will be required to wear masks and stand six feet apart, Price said.

The Masonic Lodge building was sold to Bruce Harrod around 2009 by the Masons, according to Harrod. After the sale of the building, some of the Masons went to the lodge in Lincoln and others began attending the lodge in Winslow, according to Trecia Slaughter, secretary-treasurer for the Cincinnati Arkansas Heritage Researchers.

Harrod has an auctioneer license and intended to set up and do some auctions and sales there, he said. Shortly after purchasing the building, Harrod, who lived in Colcord, Okla, moved back to Hot Springs to care for family, he said.

Another factor that nixed the idea of using the building was the tornado which came through on Dec. 31, 2010, Harrod said. The twister killed three Cincinnati residents and injured nine others.

"Well, the tornado hit and that kind of set us back a little bit even though the building took the tornado very well, it's real strong," Harrod said. "But everyone around us didn't. The house next door got completely removed from its foundation."

Cincinnati Arkansas Heritage Researchers historian Gary Barnes thinks some of the material used to build the lodge came from the old red school house on top of the hill when a new one was built in town limits. The new school began serving students in January 1939, according to the book "Cincinnati, Arkansas, 1836-1986: Illinois Township," compiled by Jaunita Wilson.

Harrod had heard the same thing and said when he went in the attic he saw there were strong beams that held it in place. However, neither Barnes nor Harrod could positively confirm it.

People began settling in the town in the late 1820s, Slaughter said. During the 1830s stores and businesses started up because the Cherokees who were brought to Oklahoma during the Trail of Tears migration traded for goods in Cincinnatti, Slaughter said.

Cincinnati was a prosperous town during the mid to late 1800s, containing five general stores; a flour mill; a saw mill; a wagon factory; three doctors; two pharmacists and even a weekly newspaper called the "Cincinnati Argus," according to "Cincinnati History Written 1978" by Mary Frances Dodson Steward.

"People actually came from Fayetteville to here because it was bigger and had more industry," Harrod said.

While he had wanted to do more with the building, Harrod hopes the next owner will be able to use the building properly.

"It's a community thing and hopefully someone in the community will get back in it," Harrod said.

Marc Hayot may be reached by email at mhayot@nwadg.com.