GOP on track to fill seat on court before election 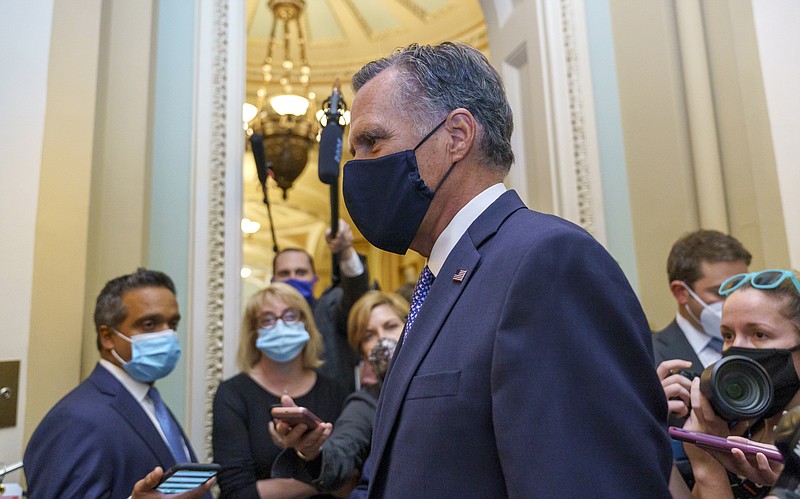 Sen. Mitt Romney, R-Utah, leaves the Senate Chamber following a vote, at the Capitol in Washington, Monday, Sept. 21, 2020. Romney is one of four Republicans who could oppose a vote on a replacement for the late Justice Ruth Bader Ginsburg prior to Election Day. (AP Photo/J. Scott Applewhite)

Trump said Tuesday that he will name his choice Saturday. Democrats say it's too close to the election, and the winner of the presidency should name the new justice. But under GOP planning, the Senate could vote Oct. 29.

"I guess we have all the votes we're going to need," Trump told WJBX FOX 2 in Detroit. "I think it's going to happen." He has said he is only considering female candidates, preserving the makeup of three women and six men in place before Ginsburg's death.

[Video not showing up above? Click here to view » https://www.youtube.com/watch?v=mw40b1gpyuE]

The Senate is controlled by Republicans, 53-47, with a simple majority needed for confirmation. The one remaining possible Republican holdout, Sen. Mitt Romney of Utah, said Tuesday that he supports taking a vote.

It is one of the quickest confirmation efforts in recent times. No court nominee in U.S. history has been considered so close to a presidential election. And it comes as the nation is marking the grave milestone of 200,000 deaths from the coronavirus pandemic.

Asked about the issue during his weekly news conference on the pandemic, Arkansas Gov. Asa Hutchinson said Trump has a "constitutional responsibility" to name a nominee to fill the vacancy and that the Senate should "move expeditiously" to hold hearings and vote on the nomination.

"If that can be done thoroughly with proper vetting, with a proper hearing before the election, I'm for fulfilling the Constitution that directs that process," he said.

He noted that the court has "cases before it that's going to make a big difference in the lives of Americans, and we need to have that ninth justice on the court.

He said his position was the same when former President Barack Obama nominated Merrick Garland to the court in 2016.

"I believe that I've advocated for following the Constitution consistently, including four years ago," the Republican governor said. "I don't know whether I actually made any public statements on it or not, but that's my statement today."

During a private lunch meeting Tuesday at Senate GOP campaign headquarters, several Republican senators spoke up in favor of voting before the election. None advocated a delay.

Elsewhere, as tributes poured in for Ginsburg with vigils and flowers at the court's steps, Democrats led by presidential nominee Joe Biden vowed a tough fight. The Senate Democratic leader, Charles Schumer of New York, said "we should honor her dying wish," which was that her seat not be filled until the man who wins the presidential election is installed in January.

But that seemed no longer an option. So far, two Republican senators have said they oppose taking up a nomination at this time, but no others are in sight. Under Senate rules, Vice President Mike Pence could break a tie vote.

While not all Republican senators have said they will support the eventual pick, few appear willing to stand in the way of a top party priority.

Senate Majority Leader Mitch McConnell made no scheduling announcements. But hearings could start as soon as Oct. 12 by the Senate Judiciary Committee, with a vote in the full Senate by Oct. 29, according to a GOP aide granted anonymity to discuss deliberations. McConnell said more information would be coming once Trump announces his choice.

On Monday, Amy Coney Barrett met with Trump, Chief of Staff Mark Meadows and other aides at the White House, then met alone with Trump, according to two White House officials who, like others, requested anonymity to discuss aspects of the confidential selection process.

After Trump met with Barrett, he told reporters he would interview other candidates and might meet with Judge Barbara Lagoa when he travels to Florida later this week. Conversations in the White House and McConnell's office have been increasingly focused on Barrett and Lagoa, according to a person granted anonymity to discuss the private deliberations.

Barrett, 48, a judge on the 7th U.S. Circuit Court of Appeals at Chicago, has long been favored by conservatives. Lagoa has been pushed by Florida Gov. Ron DeSantis, and aides tout her political advantages of being Hispanic and hailing from the key political battleground state.

Outside the White House, key Senate Republicans continued to lobby the president directly on his pick. Trump has fielded phone calls from GOP senators such as Ben Sasse of Nebraska and Rick Scott of Florida about their respective favored candidates for the vacancy.

Sasse pushed hard for Barrett in a conversation with Trump this week, one of more than a half-dozen discussions he's had lobbying for her. Scott said he spoke with Trump on Monday about Lagoa, a favorite of Florida legal circles but yet a much less known commodity in Washington and among Senate Republicans.

Scott impressed upon Trump that she would be the first Supreme Court justice from Florida -- a must-win state for the president this November -- as well as the court's first Cuban American. Picking Lagoa would help Trump politically not just in Florida but potentially in Arizona and Texas, Scott said.

"But most important, she understands there's three branches of government," Scott said of Lagoa. "The judiciary does not have the right to be activist judges. If you look at her track record in Florida, she was clearly not an activist judge."

White House press secretary Kayleigh McEnany said Trump is confident that the confirmation can be completed before the election.

"We believe that Republicans will remain unified, and this nominee will get across the finish line," McEnany said.

Democrats point to hypocrisy in Republicans trying to rush through a pick so close to the election after McConnell led the GOP in refusing to vote on Garland in February 2016.

Romney, the GOP's 2012 presidential nominee, dismissed that argument, saying "it was not unfair" for Republicans to refuse to consider Obama's choice of Garland.

The Utah Republican backed up his decision by saying it's not "written in the stars" that the court should have a liberal bent. He said Trump's pick will tip the court to become more conservative and that is appropriate "for a nation which is, if you will, center right, to have a court which reflects a center right point of view."

In a statement Tuesday morning, Romney echoed Republican leaders who have said historical precedent supported filling the seat in an election year when the presidency and Senate were controlled by the same party.

"The Constitution gives the president the power to nominate and the Senate the authority to provide advice and consent on Supreme Court nominees," he said. "Accordingly, I intend to follow the Constitution and precedent in considering the president's nominee. If the nominee reaches the Senate floor, I intend to vote based upon their qualifications."

At the private lunch, Sen. Mike Braun of Indiana said, senators advocating swift voting warned of "too many complications" if the process is delayed until after the election.

Conservative groups pushing for swift approval also argue that the election result could be disputed with legal battles dragging on for weeks.

Democrats say voters should speak first, on Election Day. Biden appealed to GOP senators to "uphold your constitutional duty, your conscience" and wait until after the president is chosen.

The president has criticized Republican Sens. Susan Collins of Maine and Lisa Murkowski of Alaska for opposing a Senate vote before elections. Trump warned that they would be "very badly hurt" by voters in November.

Collins went further Tuesday saying she would vote against Trump's pick, "not because I might not support that nominee under normal circumstances, but we're simply too close to the election."

Republicans anticipate an election-year boost from the debate over abortion, health care and other issues before the court. "These sorts of fights bring Republicans together," said Sen. Todd Young, R-Ind., the party's Senate campaign chairman.

At a memorial on the National Mall marking the 200,000 covid-19 deaths, House Speaker Nancy Pelosi paid tribute to Ginsburg and warned against Trump's coming court challenge to the Patient Protection and Affordable Care Act. "It's a time for us to vote health," she said.

Ginsburg, 87, died Friday of metastatic pancreatic cancer. She will lie in state at the U.S. Capitol this week, the first woman accorded that honor. Her casket will be on view today and Thursday on the steps of the high court.

No nominee has won confirmation so quickly since Sandra Day O'Connor -- with no opposition from either party -- became the first woman to serve on the Supreme Court in 1981.

Republicans on the Senate Judiciary Committee, where they hold a two-seat majority over Democrats, huddled privately Tuesday morning to begin sketching out the procedural logistics for considering Trump's eventual nominee.

Senate Judicial Committee Chairman Lindsey Graham, R-S.C., said he will announce how the process will work once Trump announces his pick Saturday.

"I'm confident we can have a hearing that would allow the nominee to be submitted before Election Day," Graham said. "Following the precedents of the Senate I think we can do that." 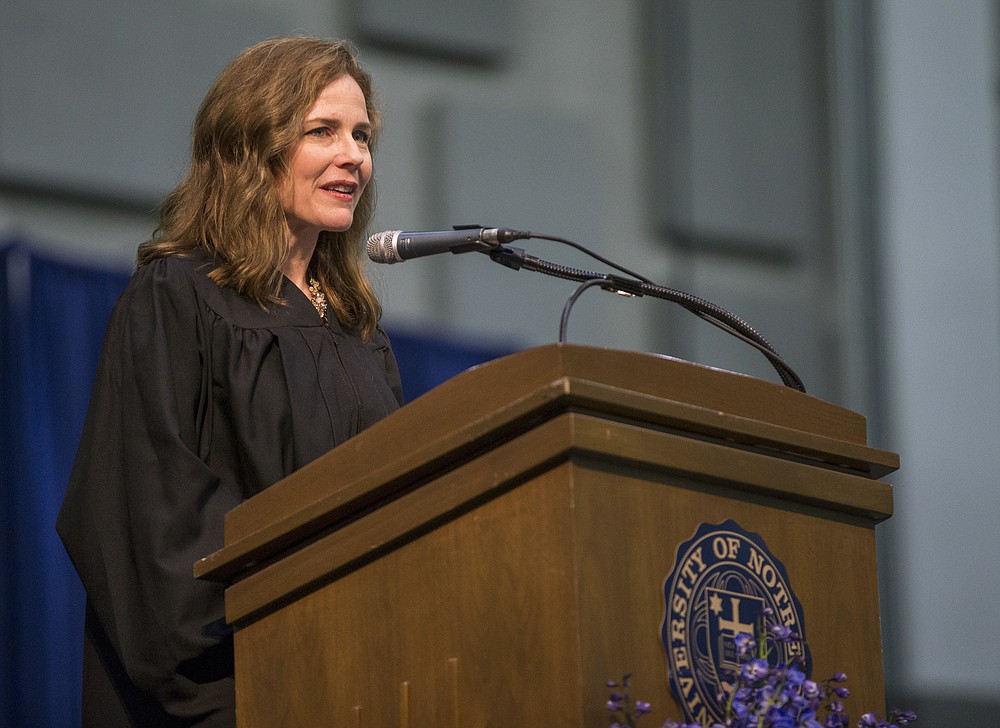 FILE - In this May 19, 2018, file photo, Amy Coney Barrett, United States Court of Appeals for the Seventh Circuit judge, speaks during the University of Notre Dame's Law School commencement ceremony at the university, in South Bend, Ind. Barrett, a front-runner to fill the Supreme Court seat vacated by the death of Justice Ruth Bader Ginsburg, has established herself as a reliable conservative on hot-button legal issues from abortion to gun control. (Robert Franklin/South Bend Tribune via AP, File) 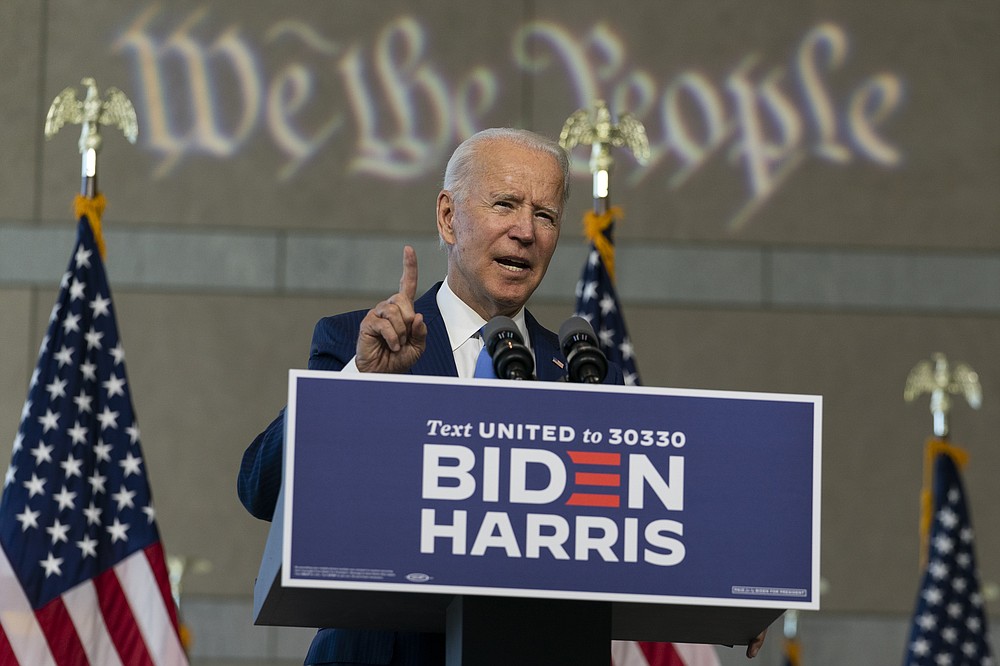 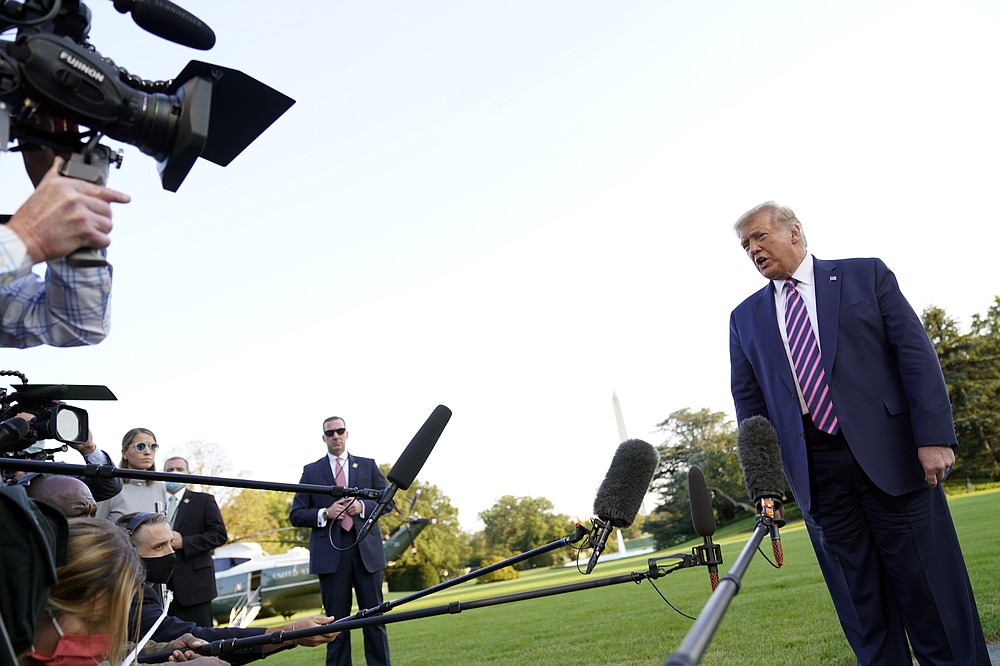 President Donald Trump speaks to reporters on the South Lawn of the White House, Tuesday, Sept. 22, 2020, before leaving for a short trip to Andrews Air Force Base, Md., and then onto Pittsburgh for a campaign rally. (AP Photo/Andrew Harnik) 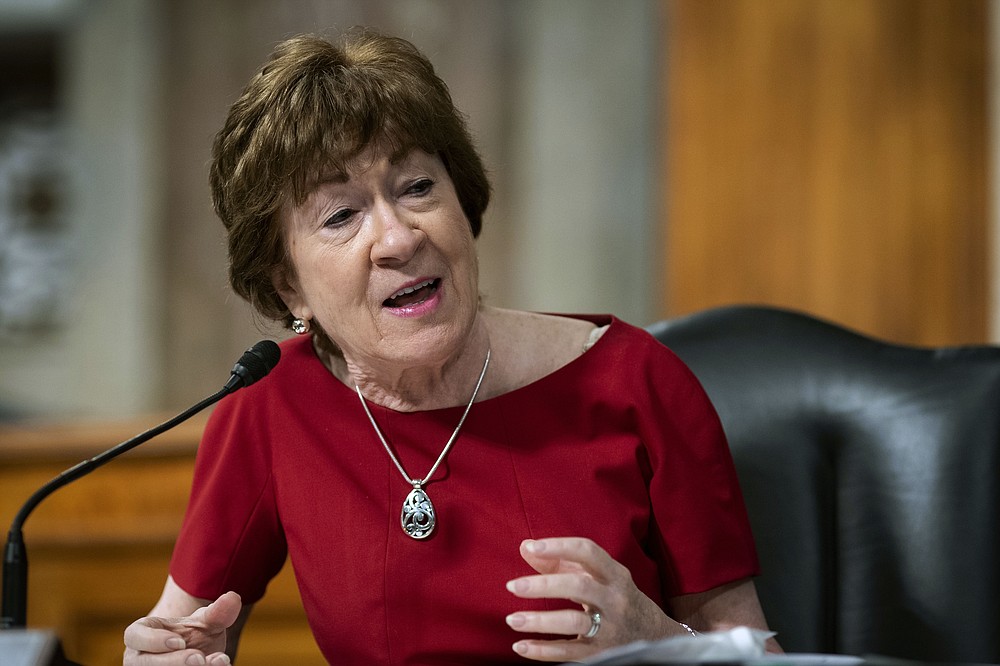 FILE - In this June 30, 2020, file photo, Sen. Susan Collins, R-Maine, speaks during a Senate Health, Education, Labor and Pensions Committee hearing on Capitol Hill in Washington. Collins is once again in a pressure cooker over an issue riveting the nation. This time it's the battle over President Donald Trump’s effort to replace the late Justice Ruth Bader Ginsburg on the Supreme Court. (Al Drago/Pool via AP, File) 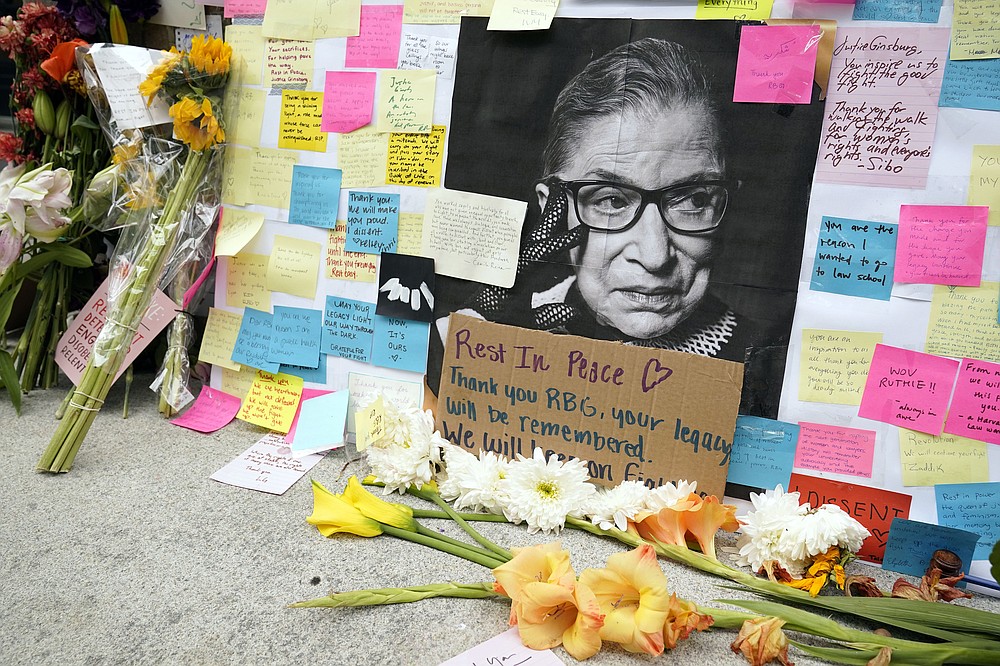 A memorial to U.S. Supreme Court Justice Ruth Bader Ginsburg includes a photograph of the late Justice, Tuesday, Sept. 22, 2020, outside the Harvard Law School library at Langdell Hall, on the campus of Harvard University, in Cambridge, Mass. Ginsburg, who attended Harvard law school but transferred to Columbia, died Friday, Sept. 18, 2020, at the age of 87. (AP Photo/Steven Senne) 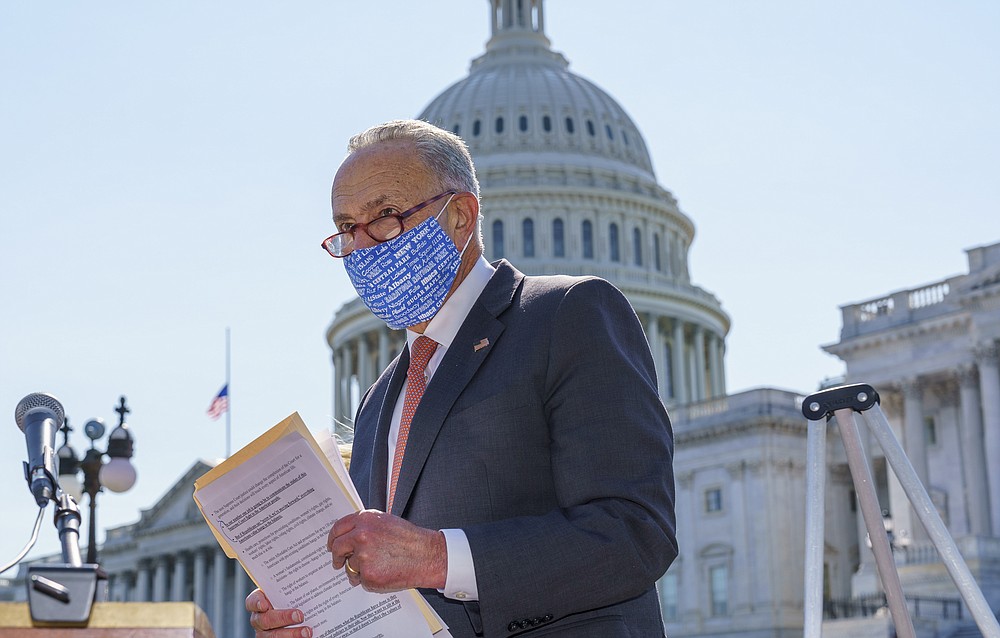 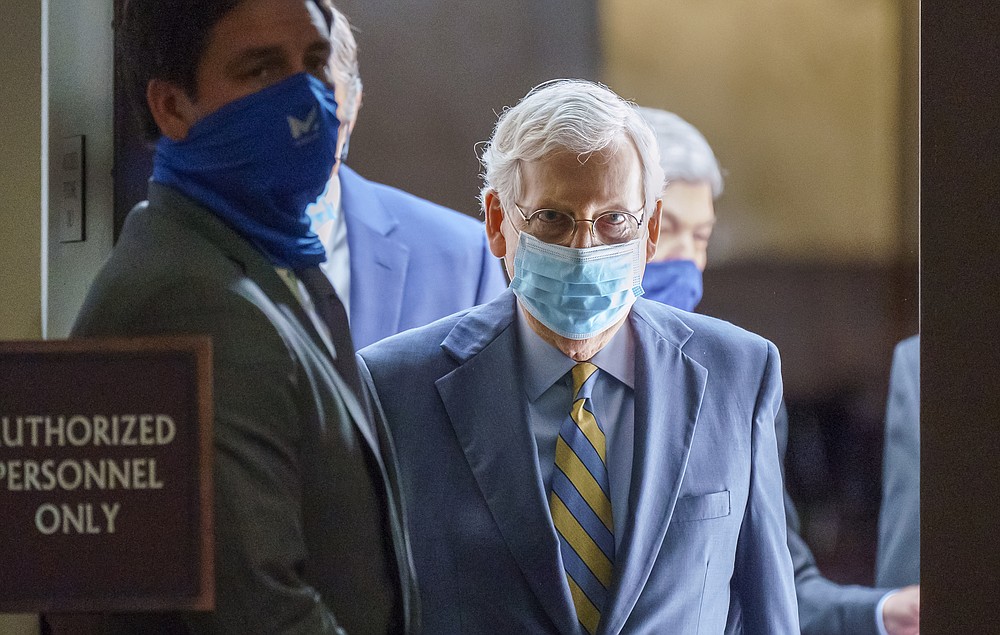 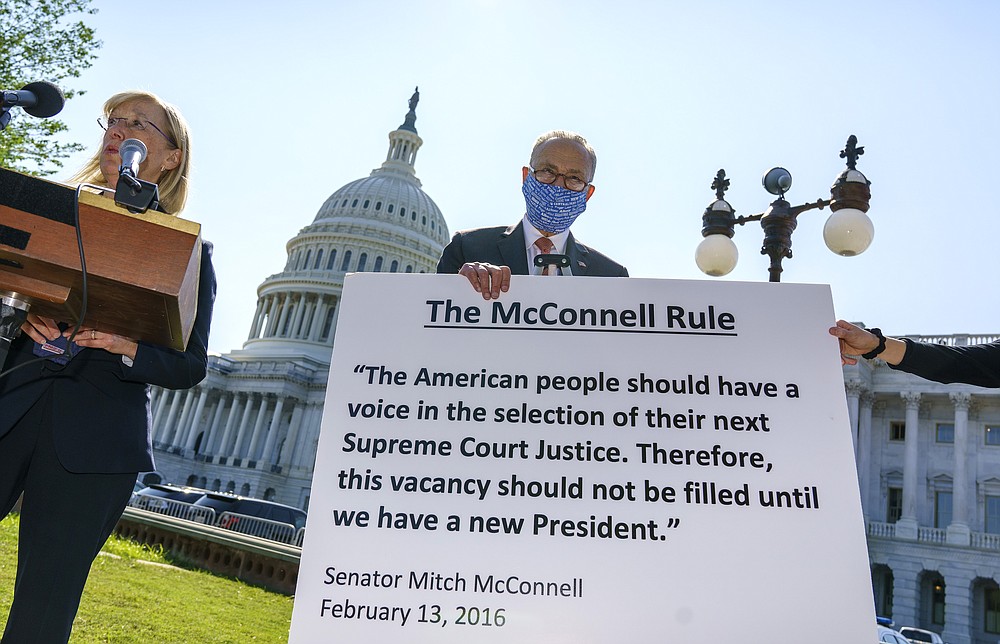