QB is Georgia's man of mystery 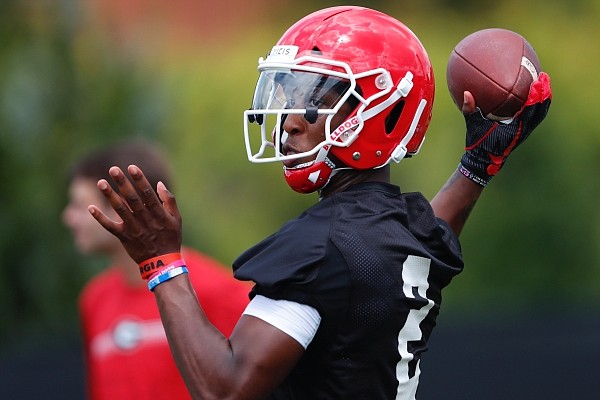 FAYETTEVILLE -- One thing is known about No. 4 Georgia's starting quarterback for Saturday's season opener against the University of Arkansas.

It won't be Jamie Newman.

Newman, a graduate transfer from Wake Forest, was expected to win the starting job. He even was listed among the top Heisman Trophy candidates after passing for 2,868 yards and 26 touchdowns last season.

Think of what Newman could do with the supporting cast he'd have at Georgia compared to Wake Forest.

But on Sept. 2 after going through several practices, Newman announced he was opting out to focus on the NFL Draft.

"Was I surprised about the opt out?" Arkansas Coach Sam Pittman said. "Yeah, a little bit, but Georgia's got some good quarterbacks.

"I think they're loaded enough to where it won't bother them too much. I understand the opt out and the reasons and all those things. But they're still loaded with at least two really good quarterbacks.

Mathis, an early enrollee in January 2019, had a health scare after spring practice in 2019. He experienced severe headaches and underwent emergency surgery to have a cyst removed from his brain.

Doctors allowed Mathis to return to practice on a limited basis late last season, and in May he was fully cleared for practice.

"[Mathis] has been through so much," Smart said. "He's a bright-eyed, talented kid. There are a lot of guys who have confidence in D'Wan."

Pittman was Georgia's offensive line coach the previous four seasons, so he knows Mathis on a personal level.

"We know what kind of arm he has," Pittman said. "But he would be maybe a little bit more of a dual threat, because he certainly can run.

"He can actually fly. He's really fast, and to be honest with you, I'm really excited if he plays against us. I'm excited for him. Because he had surgery that might not have allowed him to play. He's come a long way. Certainly we're not wanting to play against him because he's such a talented young man. But I'm certainly thrilled that he has been cleared and is ready to get his football career back on course. A wonderful kid."

When Georgia's workouts were shut down in the spring because of the coronavirus pandemic, Mathis stayed in Athens to continue training and be supervised by the team's medical staff.

"He has a powerful arm, has a great spin on the ball," Georgia wide receiver Kearis Jackson told reporters Monday when asked about Mathis' passing ability. "I know this offseason we took it extra serious about getting the extra throws in, getting that chemistry right.

"This offseason, all the quarterbacks threw well, but D'Wan's speed and stuff is very special for him to be able to have an arm and the speed as well. He will be a weapon."

Daniels redshirted last year after suffering a season-ending injury in USC's opener against Fresno State. He transferred to Georgia in late May, and in July he was granted a waiver by the NCAA for immediate eligibility.

After graduating in three years from Mater Dei High School in suburban Los Angeles, Daniels won the starting job for USC in 2018 as a true freshman. In 11 games, he passed for 2,672 yards and 14 touchdowns with 10 interceptions. He completed 25 of 34 passes for 215 yards and 1 touchdown with 1 interception against Fresno State before being injured in the third quarter.

Daniels has been practicing, but like most teams, Georgia doesn't hit its quarterbacks in practice. Smart said he hopes Daniels – who also had a second knee procedure in January that Smart has called a "cleanup" – will be medically cleared to play by Saturday.

"If we didn't think he was going to be cleared, then we wouldn't be practicing him," Smart said earlier in fall camp "As far as we can tell, it will probably be a game-time decision."

"With JT Daniels, you can go back and watch the Fresno State game from last season, and I mean he's just throwing darts and throwing from any angle," Pittman said. "He's a shortstop, he's a right fielder. He can do anything he wants with the football."

Bennett, a junior, came to Georgia last season as a transfer from Jones County (Miss.) Junior College. He played in five games off the bench and completed 20 of 27 passes for 260 yards.

Beck is a true freshman from Jacksonville, Fla., and enrolled in January.

The Bulldogs will have a new starting quarterback after Jake Fromm held the position the previous three seasons. Fromm won the starting job as a true freshman after Jacob Eason was hurt in the 2017 opener. He left Georgia after his junior season to enter the NFL Draft and was a fifth-round pick by the Buffalo Bills.

As entrenched as Fromm was, Smart didn't name him the starter going into last season. Smart said not announcing a starting quarterback has become the norm for his program.

"It's not a problem for me," Smart said. "We've had it before, so it's not a cause for concern among our staff, our organization or our kids. We talk about it a lot with our players to make sure they understand where we are."