Results on single-dose option possibly in by year’s end by Compiled by Democrat-Gazette staff from wire reports | September 24, 2020 at 7:24 a.m. 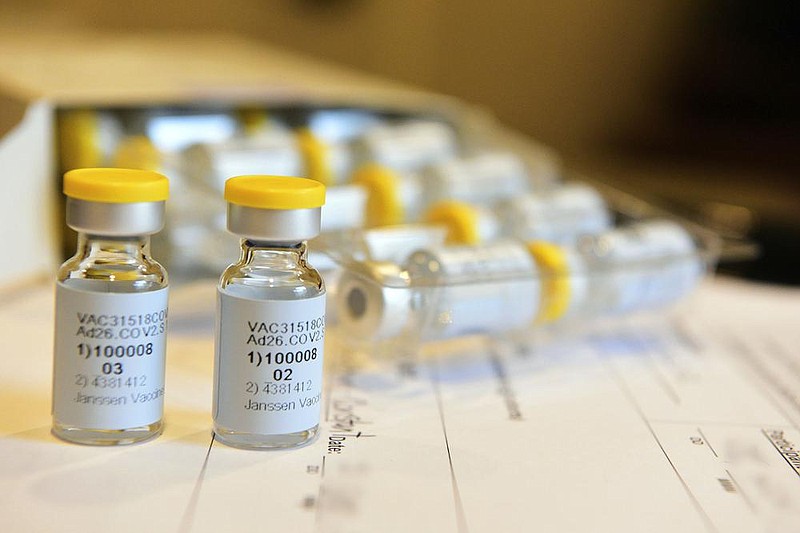 This photo taken earlier this month shows a single-dose coronavirus vaccine developed by Johnson & Johnson. The company said Wednesday that the vaccine is in the final phase of testing. (AP/Courtesy of Johnson & Johnson/Cheryl Gerber)

The first coronavirus vaccine that aims to protect people with a single vaccination has entered the final stages of testing in the United States in an international trial that will recruit up to 60,000 participants.

The experimental vaccine being developed by pharmaceutical giant Johnson & Johnson is the fourth vaccine to enter the large, Phase 3 trials in the United States that will determine whether the vaccines are effective and safe.

Paul Stoffels, chief scientific officer of Johnson & Johnson, predicted that there may be enough data to have results by the end of the year and said the company plans to manufacture 1 billion doses next year.

Three other vaccine candidates have a head-start, with U.S. trials that began earlier in the summer, but the vaccine being developed by Janssen Pharmaceutical Cos., a division of Johnson & Johnson, has several advantages that could make it logistically easier to administer and distribute if it is proved safe and effective.

The company is initially testing a single dose, whereas the other vaccines being tested in the United States require a second shot three to four weeks after the first one to trigger a protective immune response. The Johnson & Johnson vaccine can also be stored in liquid form at refrigerator temperatures for three months, whereas two of the front-runner candidates must be frozen or kept at ultracold temperatures for long-term storage.

"A single-shot vaccine, if it's safe and effective, will have substantial logistic advantages for global pandemic control," said Dan Barouch, director of the Center for Virology and Vaccine Research at Beth Israel Deaconess Medical Center in Boston, who partnered with Johnson & Johnson to develop the vaccine.

The United States has invested billions of dollars in an array of vaccine technologies, including close to $1.5 billion to support the development of the Johnson & Johnson vaccine and an advance purchase of 100 million doses. The Johnson & Johnson vaccine is the second to use a viral-vector approach, taking a harmless virus and inserting into it a gene that contains the blueprint for a distinctive part of the novel coronavirus.

[Video not showing up above? Click here to view » https://www.youtube.com/watch?v=vAsfAxr38RM]

"It is a really good thing that we have this diversity of platforms because this is a critical crisis in terms of our global circumstance," said Francis Collins, director of the National Institutes of Health. "Now, here in the U.S. with 200,000 deaths, we want to do everything we can without sacrificing safety or efficacy."

In a monkey study published in "Nature in July, Barouch showed that his approach successfully taught the immune system to protect against a real infection. Data from early-stage human trials that included 400 participants in the United States and Belgium was scheduled to be submitted to a preprint server Wednesday, but Stoffels said that overall, the vaccine showed that it triggered a promising immune response and that side effects of the vaccine were tolerable, including some fevers that resolved within one to two days.

Dr. Anthony Fauci, director of the National Institute of Allergy and Infectious Diseases, said that once there were 154 cases of covid-19 in the trial, it would be possible to tell whether the vaccine was effective.

The trial is designed to be twice as large as the initial design of other Phase 3 trials in the United States, although the Pfizer trial has also expanded to include 44,000 participants. Half of the participants will receive a vaccine, and half will receive a placebo.

As the other coronavirus trials in the United States have struggled to recruit diverse populations, the size and international scope of the Johnson & Johnson trial could provide an advantage.

"The vaccine trials need to have participation that reflect the diversity of our nation," said Michelle Andrasik, director of community engagement for the Covid-19 Prevention Network, the federal network partnering with companies to run trials. "We need everyone involved to ensure that we find a vaccine that is effective for everyone."

Meanwhile, Centers for Disease Control and Prevention Director Robert Redfield told senators Wednesday that he didn't mean to imply last week that it could take into the second half of next year for enough covid-19 vaccine to be available to inoculate all Americans.

Redfield said at a Senate health committee hearing Wednesday that about 700 million vaccine doses should be available by April, echoing a timeline laid out by Paul Mango, deputy chief of staff at the Department of Health and Human Services, last week.

The vaccine candidates that are furthest along in development will require a two-dose regimen. Redfield's comments last week, in an appearance before a different Senate panel, were "alluding to how long I thought it would take to get those doses into the American public," he said. It could take through July to disburse the vaccine to all Americans that want one, Redfield said.

Trump said last week that he had called Redfield after his earlier testimony to tell him his comments weren't correct.

Fauci agreed Wednesday with the timeline of 700 million doses by April.

"We feel cautiously optimistic that we will be able to have a safe and effective vaccine, although there is never a guarantee of that," Fauci told a Senate committee.

The heads of U.S. health agencies attempted during the hearing Wednesday to reassure the public that staff members are making decisions, particularly surrounding a vaccine, based on science, not politics. FDA Commissioner Stephen Hahn committed to taking any inoculation his agency authorizes.

"FDA will not authorize or approve a vaccine that we would not feel comfortable giving to our families," Hahn said.

"Science will guide our decisions. FDA will not permit any pressure from anyone to change that," Hahn said. "I will put the interest of the American people above anything else."

Health officials also said they were dismayed at studies showing that "a disturbing number" of people who recover from covid-19 experience inflammation in their heart muscles, Fauci said. The inflammation is "really quite puzzling," he told lawmakers, and it remains to be seen whether it will subside or whether those who have had the virus could suffer from cardiovascular issues later on.

"These are the kinds of things that tell us we must be humble," Fauci said, "that we do not completely understand the nature of the virus."

More than 200,000 Americans have died from covid-19 so far this year, and in many states, infections still are climbing. The U.S. is confirming an average of 41,968 new daily cases, up 13% compared with the average two weeks ago.

Fauci was blunt: More lives could have been saved if everyone in the country better followed recommendations to wear masks, avoid crowds and keep 6 feet apart.

In a testy exchange, Sen. Rand Paul of Kentucky insisted that public health officials were wrong that a lockdown could change the course of the pandemic. A visibly angry Fauci accused the Republican of repeatedly misconstruing his statements.

"I don't regret saying that the only way we could have really stopped the explosion of infection was by essentially -- I want to say shutting down," he said.

Separately, Missouri Gov. Mike Parson, a Republican who has steadfastly refused to require residents to wear masks, tested positive for the coronavirus, his office said Wednesday.

Parson was tested after his wife, Teresa, tested positive earlier in the day.

"I want everybody to know that myself and the first lady are both fine," Parson said in a video posted on his Facebook page.

"Right now I feel fine. No symptoms of any kind," Parson said in the video. "But right now we just have to take the quarantine procedures in place."

Missouri Department of Health and Senior Services Director Randall Williams said contact tracing efforts have begun, seeking out people who have had close contact with the governor or his wife, but despite Parson's many recent public appearances, it is believed that involves "a relatively small number of people."

Parson has repeatedly urged residents to wear masks and maintain social distancing, but he has been an outspoken opponent of mask mandates, sometimes appearing at functions without one. In July, speaking without a mask at a Missouri Cattlemen's Association steak fry in Sedalia, he reiterated his stance.

Elsewhere, the British government Wednesday defended its strategy for combating a second wave of covid-19 cases amid criticism that its new slate of restrictions will not be enough to stop the coronavirus from spreading exponentially.

Prime Minister Boris Johnson unveiled the new rules -- including a 10 p.m. curfew on bars and restaurants, increased use of masks and once again encouraging people to work from home -- in a televised address Tuesday night.

In Germany, a coronavirus tracing app has been used to transmit 1.2 million test results from labs to users during its first 100 days, officials said Wednesday.

The Corona-Warn-App, downloaded more than 18 million times since its launch in June, was touted by the government as a key tool in the country's effort to contain the spread of the virus.

In France, Defense Minister Florence Parly admitted to a Senate investigating committee to misleading the nation about virus protections for air force personnel who evacuated French citizens from the Chinese city of Wuhan last winter, and have been suspected of links to France's first confirmed covid-19 cluster.

In Israel, Prime Minister Benjamin Netanyahu on Wednesday announced plans for a strict, two-week nationwide lockdown in a bid to slow a raging coronavirus outbreak.

In a video statement, Netanyahu said there would be a "full lockdown" beginning Friday that would run through Oct. 10. He said the lockdown would continue for at least another two weeks, albeit "hopefully" with some restrictions eased.

Information for this article was contributed by Carolyn Y. Johnson of The Washington Post; by Anna Edney of Bloomberg News; and by Lauran Neergaard, Ricardo Alonso-Zaldivar, Danica Kirka, Frank Jordans, Angela Charlton, Josef Federman and Linda Johnson of The Associated Press. 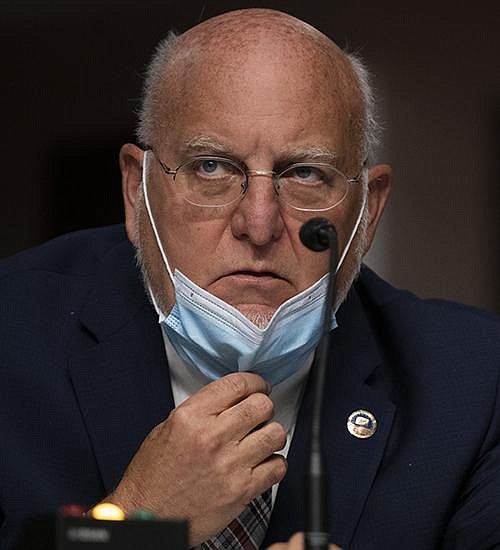 Robert Redfield, director of the Centers for Disease Control and Prevention, told lawmakers Wednesday that about 700 million vaccine doses should be ready by April. (AP/Alex Edelman)
ADVERTISEMENT