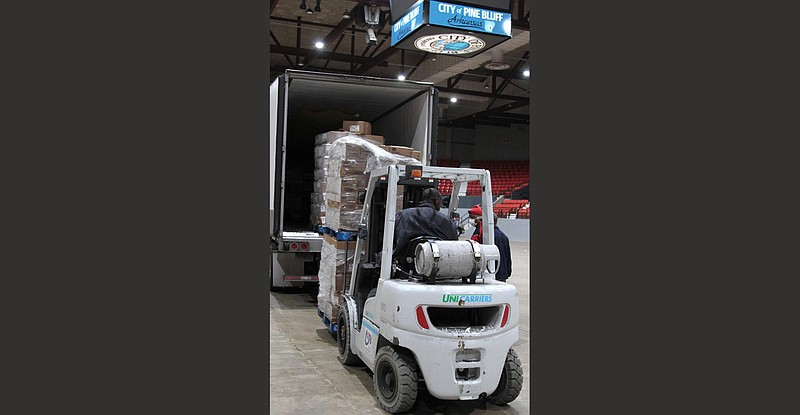 After a prolonged appeal by Pine Bluff Convention Center Director Joseph McCorvey seeking an additional $30,000 to pay for boiler maintenance, air conditioning repairs and covid-19-related upgrades in the center's banquet hall restrooms, the Advertising and Promotion Commission turned down McCorvey's request by a vote of three commission members in favor and two against.

The A&P Commission, with six members, requires a majority vote of the entire membership, and only five were present on Wednesday afternoon's conference call.

McCorvey was originally seeking nearly $70,000 to fund covid-19-related upgrades throughout the building but later pared down his request, saying he could retrofit the restrooms with touch-free hardware for about $12,000 and have his employees do the installation. The air conditioning would cost about another $8,000, he said, and the boiler maintenance another $10,000.

During a meeting Monday, Brown and Moss, who make up the commission's finance committee, reluctantly agreed to place McCorvey's request on the agenda for the full commission to decide on. At issue was McCorvey's insistence that about $300,000 in unspent funds sitting in the center's special events line item could not be used to fund the upgrades because that money, though unspent, had already been committed.

Brown and Moss had asked McCorvey to use some of the money in the short term, saying the commission could revisit the matter before the end of the year and if tax collections picked up, could likely fund all or part of his request.

On Monday, McCorvey repeatedly told Brown and Moss that he wanted the request on the agenda. "I just want an up or down vote," he told the two men.

Pleading his case, McCorvey said that support from the A&P Commission had been cut from just over $1.1 million for the year, to slightly more than $1 million.

McCorvey added that anticipated revenue for the year from events that never materialized because of covid-19 totaled about $187,000 and that sales of concessions, alcohol and catering added an additional $77,000 in losses to the convention center.

"This is why I'm coming the A&P Commission with this request so we can get these upgrades done," he said. "We want the public to feel safe that they're coming into a safe environment, and we don't want the stigma about of 'well, somebody got real sick and I don't want to have an event in your building.'"

A&P Commission Director Sheri Storie said the Civic Auditorium Complex Commission had agreed to make a request of the A&P Commission back in April to secure funds for the restroom upgrades.

Storie said the request in August was for $11,000 for phase one of the upgrades.

"During that time, Mr. Brown asked if the center could hold off on this request until we find out what the city might be able to do with the federal funds that would cover covid expenses," she said. "It was stated that no, they needed to do it now because of their schedule during the fall ... so that's why it was suggested in August that they use their money ... because it was such an urgent request and they had to do it now."

Storie said that $200 million in federal CARES Act money that the state received for city and county expenses and tourism industry support is in the process of being disbursed, with final rules, requirements and disbursement ratios to be decided next month.

"All of this funding does have to be used by Dec. 31 of this year so things are moving very quickly with that federal covid money right now," she said.

Storie said the A&P Commission budget has been adjusted twice this year, once because of anticipated revenue shortfalls, but the second time because the commission did receive additional funds.

"We provided funding to the convention center and to all of our funding recipients to the best of our ability," she said. "But the convention center has not made one budget adjustment and maybe its time they started looking at ways they can save their money during this unprecedented time. We can't go on working with a budget that he made in 2019 prior to covid."

Storie suggested a few cost-cutting measures, such as paying mileage reimbursements instead of car allowances or bringing personnel costs down to be more in line with revenue shortfalls.

"We're not sitting on a ton of money," she said. "We all know that the convention center costs increase every year as the building gets older. It's 44 years old, and we will never have the money we need to bring that building up to where it needs to be."

McCorvey said he applied for money from the Paycheck Protection Program in an effort to keep from having to resort to furloughs.

"This is a big building, but when we were turned down, I did furlough the staff for two months," he said. "I brought them back because we only had two part-time people trying to take care of this venue. As far as having this money, we have paid money for those concerts, those festival events. ... We have to pay the talent that we have tentatively scheduled for this April 30 and May 1, so we have to have that money on hand."

Storie said no one had ever suggested that the commission not fund the convention center, but commission money also has to go to tourism development, and funds are limited. She said the cancellation of the King Cotton Basketball Classic should free up some money for the convention center to use until other funding comes through.

Finally, McCorvey asked the commission to put his request to a vote.

"Let's get down to the bottom line," he said. "I just want to know if this commission will support providing $30,000 so that we can move forward and do what we need to do. ... I know I'm not touching that money because it's set aside."

"I move we advance the question, and I vote no," Moss said.

Finally, Eugene moved in favor of granting McCorvey's request and Stice seconded. After the vote, McCorvey told the Pine Bluff Commercial that the commission's rejection of his request had tied his hands.

"I've got a boiler I've got to get torn down and ready for inspection by the state because we're going into the winter and we've got to have heat, and I've got to have some redundancy," he said. "We'll be able to pull that from somewhere because we have to with fall coming. The covid upgrades and the air conditioning piece will just have to go on hold."