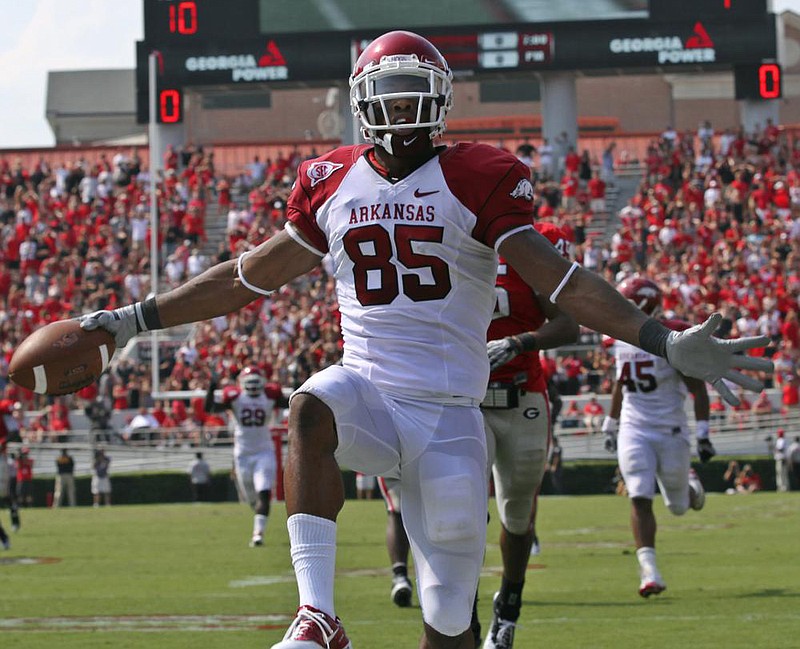 Arkansas wide receiver Greg Childs celebrates after scoring the winning touchdown in the final seconds on a pass from Ryan Mallett in the Razorbacks’ victory at Georgia in 2010. Georgia leads its series with Arkansas 10-4 entering Saturday’s game at Fayetteville. (Democrat-Gazette file photo)

FAYETTEVILLE -- The University of Arkansas beat Georgia in prestigious New Year's Day bowl games -- the Sugar and Cotton bowls -- in their first ever meetings under legendary coaches Frank Broyles and Vince Dooley.

Since then, the Bulldogs have ruled the Hogs in one of the more sparsely played of all SEC matchups for both schools.

Georgia is the only current SEC team that has never lost a game to the Razorbacks in Arkansas. Georgia Coach Kirby Smart is 11-0 as an assistant coach against Arkansas.

The No. 4 Bulldogs will take a 4-0 mark at Reynolds Razorback Stadium and a 5-0 record in the state into Saturday's 3 p.m. season opener. The three-time defending SEC East champion Georgia is favored by more than three touchdowns for the previously unscheduled meeting, as the game was added after the SEC altered its schedule to a conference-only slate due to covid-19 concerns.

Georgia leads the series with a 10-4 record and, interestingly, the Razorbacks wins have only come at neutral sites and "between the hedges" at Georgia's Sanford Stadium, in 1993 and 2010. The Bulldogs won six games in a row in between those Razorback victories, including their only meeting in the SEC Championship Game on Dec. 7, 2002.

Arkansas' wins in the series are all notable because of their importance toward the Razorbacks' direction at the time of the games and the quality of the opponent.

The first game between the powerhouses with Hall of Fame coaches was a classic in New Orleans on Jan. 1, 1969, won 16-2 by Arkansas.

The Razorbacks entered the game with a 9-1 record, ranked No. 9 in the country having lost only to Texas. Georgia, the SEC champion, was 8-0-2 and ranked No. 2, its only blemishes being a 17-17 tie at Tennessee in the season opener and a 10-10 tie against Houston.

The favored Bulldogs had the No. 1 defense in the country, with standouts like end Bill Stanfill and safety Jake Scott, and they were particularly tough against the run. Georgia led the country by allowing 9.8 points per game.

"We knew we were a pretty good football team, but we also knew that Georgia had a great football team," said Arkansas split end Chuck Dicus, who was named MVP of the Sugar Bowl for his 12 catches for 169 yards and the game's only touchdown.

Dicus said the Arkansas coaching staff figured they might have more success moving the chains by passing and that was proven correct, as the Razorbacks ran 41 times for 40 yards.

But the Arkansas defense was also up to the task, holding the Bulldogs to 75 rushing yards on 47 carries and getting solid pressure on quarterback Mike Cavan.

Arkansas quarterback Bill Montgomery completed 17 of 39 passes for 185 yards, with a touchdown and an interception.

The Razorback coaching staff found a way to get Dicus in a favorable position.

"The idea was to get Scott one-on-one with Dicus," Montgomery said in a Sugar Bowl recap written by Marty Mule' of the New Orleans Times-Picayune.

"They were so confident in their ability that they played a lot of man to man coverage," Dicus said. "Our coaching staff recognized that and they recognized Jake Scott would ... if they put me into the slot, then he would move over and cover me man to man.

"You know, it's vey difficult, even for the best player in the country, to cover someone man to man when you're lined up anywhere from 10 to 15 yards off of him. So we felt like we could do some good with that formation and throwing quick, short routes that day. But I think the game plan simply was to get the ball out of Montgomery's hand quickly because they had a great defensive line that would be rushing him."

The Razorbacks took the lead for good on Montgomery's 27-yard strike to Dicus on the first play of the second quarter.

"The touchdown was a play that we somewhat improvised with me in the slot where most of the day I would run sort of a quick out," Dicus said. "On this particular play, of course Jake Scott was in man coverage. Instead of a quick out, I faked the out and ran a post route.

"The ball was perfectly thrown and I was able to catch it and score the touchdown. That was a play where we sort of took advantage of their aggressiveness, because he had starting jumping that out route."

Georgia got a second quarter safety and Arkansas kicker Bob White made the first of his three field goals to make it 10-2 at the half.

The Bulldogs threatened early in the second half, reaching the Arkansas 3, before Dick Bumpus and Lynn Garner hit Bulldogs' runner Brad Johnson on a leap and forced a fumble that rolled out of the back of the end zone for a touchback.

"You could almost feel the lift that gave us," Broyles said in the recap. "And it had to take something out of them."

The Razorbacks won their sixth consecutive game by beating Georgia in the Sugar Bowl. That turned into a 15-game winning streak when the Hogs won their first nine in 1969 and took a No. 1 ranking into the Big Shootout against Texas.

"There's no doubt that the '68 team in general was the reason why the '69 game with Texas became such an important game," Dicus said. "Because that did somewhat put us in the spotlight on a national basis and then when the '69 season came around and ABC and the athletic directors and coaches got together to move the Texas game, I think because of the success of the 1968 team, I think there was a lot of anticipation that our team in '69 could possibly be undefeated at the end of the season when we played Texas."

Arkansas also upset the Bulldogs in the 1976 Cotton Bowl in Broyles' penultimate season. The Razorbacks were ranked No. 18, having emerged from a three-way tie with Texas A&M and Texas, to represent the Southwest Conference in Dallas, while the Bulldogs were No. 12 after tying for second place in the SEC.

Georgia raced to a 10-0 lead but Arkansas foiled a trick play, a "shoestring" lateral by quarterback Ray Goff, en route to scoring the final 31 points in a 31-10 rout. Goff, who had bent over to pretend to tie his shoe, shoveled the ball to Gene Washington, who was hit immediately, and Arkansas' Hal McAfee recovered the loose ball. Ike Forte scored a 1-yard touchdown with 50 seconds left before halftime to tie the score.

Scott Bull's 35-yard pass to Freddie Douglas set up a Roland Fuchs 5-yard touchdown run early in the fourth quarter as the Razorbacks took the lead for good.

In more recent days, the Dogs and Hogs played two entertaining shootouts in 2009 and 2010, with Bobby Petrino matching wits with Mark Richt, and each team won at the other's home stadium.

No. 23 Georgia prevailed 52-41 in a shroud of mist at Razorback Stadium on Week 2 in 2009 despite the best efforts of quarterback Ryan Mallett and sophomore wideouts Joe Adams, Greg Childs and Jarius Wright.

Mallett passed for 408 yards, then a school record, and threw 5 touchdown passes, 2 of them to Childs, who had 5 receptions for 140 yards. Adams, Wright and junior tight end D.J. Williams caught one touchdown pass apiece.

The following season on Sept. 18, the No. 12 Razorbacks built a 24-10 lead through three quarters on Mallett touchdown passes covering 57 yards to Chris Gragg and 22 yards to Ronnie Wingo, a Knile Davis 1-yard scoring run and Zach Hocker's 48-yard field goal.

Georgia rallied to tie the game 24-24 with 3:55 remaining, then pinned the Razorbacks deep before punter Dylan Breeding crushed a 57-yard punt from the Arkansas 9.

On a third and 4 from the 50 yard line, Arkansas end Jake Bequette's vicious sack of Aaron Murray left the quarterback's helmet rolling on the grass, and the Razorbacks took over at their 27 with 38 seconds remaining.

No problem for Petrino and Mallett, who found Willliams for gains of 18 and 15 yards on the next two snaps. Then Childs caught a route down the left sideline, juked past a Georgia defender with a jab step and scored a 40-yard touchdown with 15 seconds left to stun the Sanford Stadium crowd and give Arkansas a 31-24 victory. 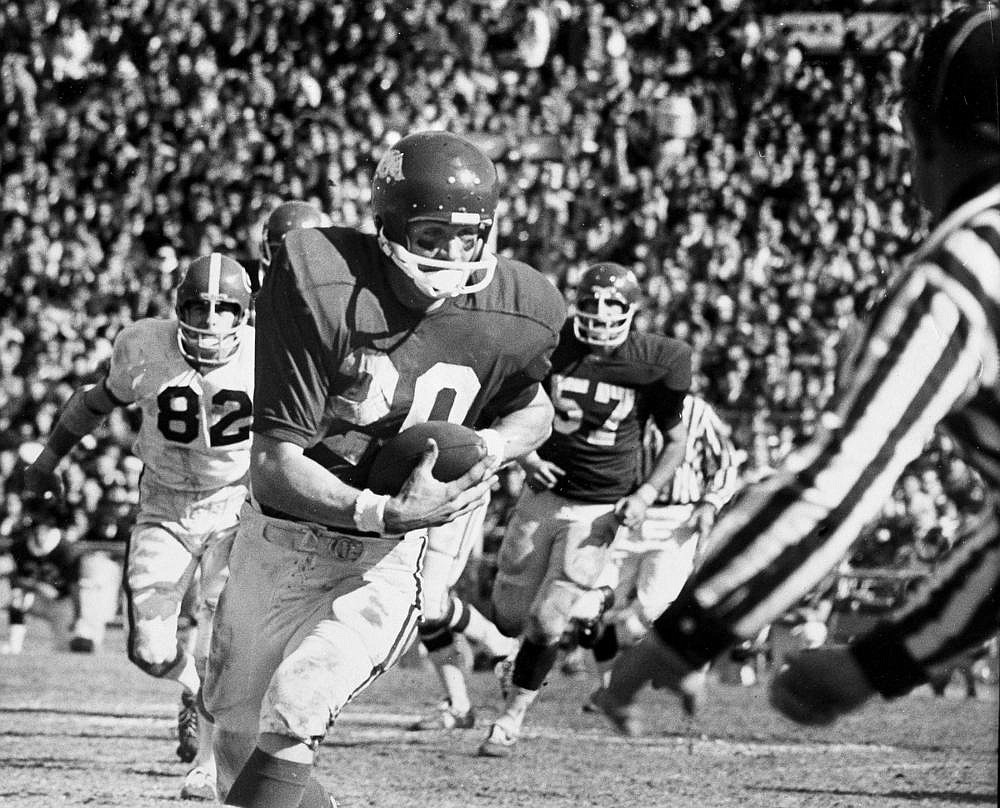 Chuck Dicus scores the game’s only touchdown during Arkansas’ 16-2 victory over Georgia in the 1969 Sugar Bowl at New Orleans. It was the first meeting between the Hogs and Bulldogs. (AP file photo) 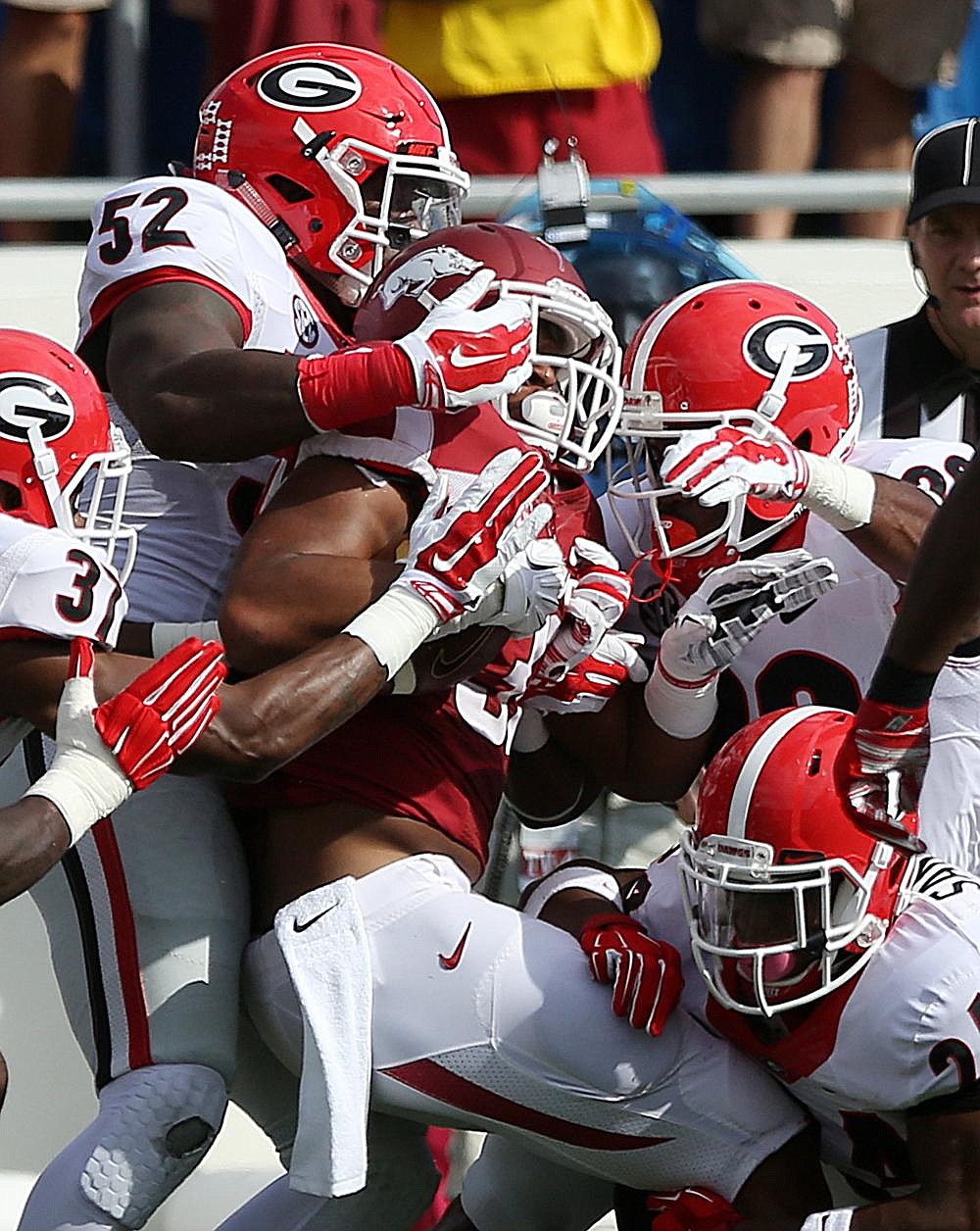 Arkansas running back Jonathan Williams is brought down by several Georgia defenders in 2014. The Bulldogs are 4-0 against the Razorbacks at Fayetteville. (Democrat-Gazette file photo)
ADVERTISEMENT