Foes of I-30 project again ask for delay 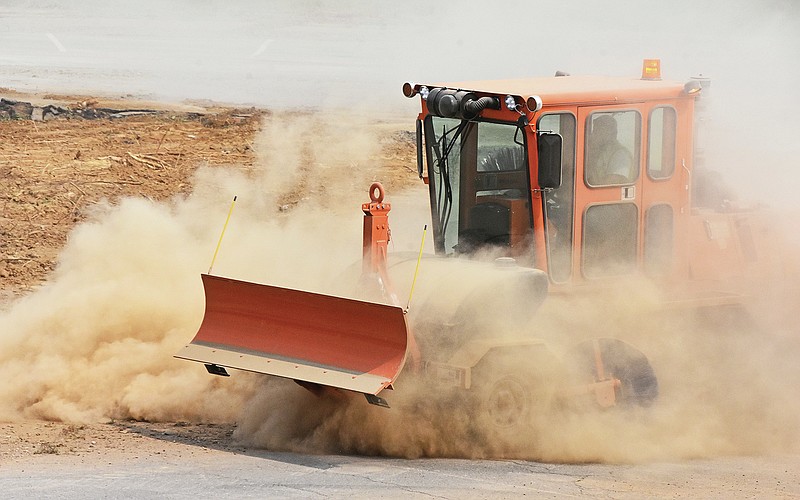 A dozer kicks up dust while working on the parking lot inside the westbound off-ramp loop to Arkansas 10/Cantrell Road and President Clinton Avenue. The closing is part of the 1 billion 30 Crossing project to remake the 6.7-mile corridor through downtown Little Rock and North Little Rock. (Arkansas Democrat-Gazette/Staci Vandagriff)

An attorney for Little Rock neighborhood groups and residents opposed to the 30 Crossing project asked the 8th U.S. Circuit Court of Appeals in St. Louis to stop construction on the nearly $1 billion project while the case is on appeal before construction gets too far down the road.

Contractors for the project are staging equipment and doing preliminary work before construction begins in earnest as soon as next week on the project to remake the Interstate 30 corridor through downtown Little Rock and North Little Rock.

"An injunction pending appeal should be issued to allow full consideration of issues impacting the human environment before committing to an irretrievable commitment of resources to a project of the size and importance of the 30 Crossing project," Richard Mays said in court papers filed Thursday.

He also asked the court to expedite its consideration of the appeal in light of that construction.

"Without expeditious consideration of this appeal, appellants will suffer irreparable injury as a result of the destruction and/or commencement of construction of portions for the project," Mays wrote. "Continued construction by [the Arkansas Department of Transportation] and its contractors will result in additional costs should an injunction be found to be warranted."

The downtown groups and residents, led by the Little Rock Downtown Neighborhood Association, are appealing a Sept. 3 order by U.S. District Judge James Moody Jr. denying their bid to immediately stop construction on the project until a more comprehensive review of the project's environmental impacts has been performed.

In a lawsuit filed last year, they said the environmental assessment the Transportation Department prepared was inadequate considering the scope and cost of the project to remake and widen the 6.7-mile corridor through downtown Little Rock and North Little Rock.

The project also includes replacing the bridge over the Arkansas River, improving a part of Interstate 40 between I-30 and U.S. 67 in North Little Rock and making portions of the route as wide as 10 lanes.

The project is the most expensive that the state Transportation Department has undertaken, and with the convergence of six major roadways in the corridor, also the most complex. Planning for the project began in 2014.

Lawyers for the department and for the U.S. Federal Highway Administration, which approved the environmental review done by state transportation officials, say their review reflected the "hard look" federal regulations require.

Moody agreed, concluding in a 19-page ruling that the plaintiffs' objections didn't rise to the level of requiring a preliminary injunction, which the U.S. Supreme Court has called an "extraordinary and drastic remedy."

In the court papers, Mays took issue with the judge.

"The district court erred in finding that the plaintiffs failed to show irreparable harm, their likelihood of success on the merits and other factors necessary for the issuance of a preliminary injunction," he wrote.

Mays also took issue with Moody's decision to not allow his side to introduce evidence outside the administrative record, which includes the environmental assessment the Transportation Department conducted as well as a reevaluation of the assessment once the scope of the project changed.

"The testimony was critical to a showing of deficiencies in the [environmental reviews] and should have been allowed," he wrote.

Moody also imposed a more difficult standard for the plaintiffs to meet for a motion for a preliminary injunction, Mays said.

"The district court applied a much heavier burden upon plaintiffs of showing that omissions of analysis or inadequate analysis from the [environmental assessment] were arbitrary and capricious, rather than that such omissions or inadequacies existed, were significant, and should have been included or more thoroughly analyzed in the [environmental assessment]," he said.