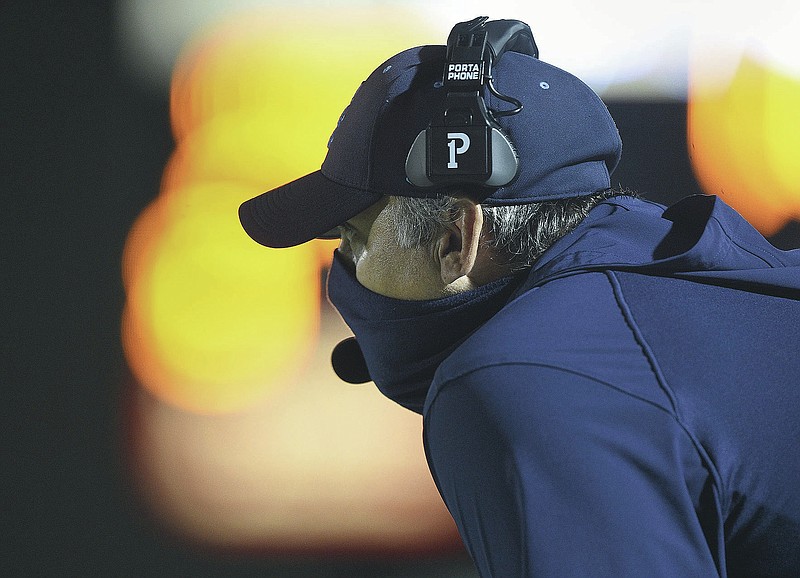 ON THE AIR The game will be live-streamed on each school's website.

BETWEEN THE LINES Bentonville leads the series 11-4 and has won the last three meetings, including a 35-21 decision last year. ... Har-Ber has had problems with turnovers as the Wildcats have lost the ball 10 times (eight interceptions, two fumbles). ... Har-Ber QB Drue McClendon has 487 yards passing in three games, but he has only two TD passes and seven interceptions. ... Sophomore Hudson Brewer leads the Wildcats' ground game with 255 yards and two TDs, while WR Ethan Fender leads the team with 11 receptions for 151 yards and one TD. ... Bentonville enters 7A-West Conference play with 25 straight wins over league opponents, with the last Tigers loss coming against Har-Ber in 2016. ... Sophomore Josh Ficklin is the Tigers' leading rusher with 296 yards and two TDs on 42 carries, while Sean Anderson has 153 yards and three TDs. ... QB Andrew Edwards has completed 32 of 49 passes for 631 yards and seven TDs, while Chas Nimrod has 13 catches for 334 yards and five TDs.

ON THE AIR The game will be live-streamed on each school's web site.

BETWEEN THE LINES Heritage comes into the game following a 17-14 overtime loss to Alma last week. ... Springdale was off last week after its 14-7 loss to Farmington the week before. ... Earlier this season the War Eagles ended a 25-game losing streak, while Springdale laid a 46-18 whipping on a good Choctaw, Okla. team in week two. ... Heritage sophomore QB Carter Hensley scored a pair of touchdowns last week for the War Eagles. ... Springdale will be without all-state WR LaDarius Wonsley, who was injured against Farmington. ... The Bulldogs are hopeful to have RB/DE Andre Sparks for tonight's game. Sparks played sparingly against Farmington after an injury.

ON THE AIR The game will be live-streamed on the Fort Smith Northside web site.

BETWEEN THE LINES Northside rolls into the game after holding off Moore, Okla. 28-21 last week in a game that was not on the original schedule. ... Bryant held off Cedar Hill (Texas) Trinity Christian 44-40, almost squandering a huge lead to the private school. ... Northside QB Dreyden Norwood, who is verbally committed to Texas A&M as a defensive back, leads the Grizzlies. Norwood ran for one score and had 148 yards passing against Moore last week. ... Bryant, the two-time defending 7A state champions, is led by QB Austin Ledbetter, who will play baseball at the University of Arkansas. Ledbetter accounted for 5 touchdowns against Trinity. ... The Grizzlies were scheduled to have played Springdale Har-Ber last week, but the game was canceled after a covid-19 issue within the Northside program.

ON THE AIR The game will be live-streamed at greenwooddogpound.com.

BETWEEN THE LINES Greenwood and Bentonville West agreed to play tonight after their original opponents canceled earlier this week because of covid-19 concerns. West was supposed to play Fayetteville and Greenwood was scheduled to face Little Rock Parkview. ... Bentonville West won consecutive games against Muskogee, Okla., and Little Rock Central after opening the season with a loss at Broken Arrow, Okla. that was televised by ESPN. .... Bentonville West scored 28 points in the second half to pull away for a 35-13 win over Little Rock Central two weeks ago. .... Quarterback Dalton McDonald threw two touchdown passes and ran for a score. ... Greenwood shut out 7A-West member Springdale Har-Ber 33-0 two weeks ago before taking down Choctaw, Okla., 23-12 a week ago at Smith-Robinson Stadium. ... Hunter Houston completed 18 of 27 passes for 207 yards and three touchdowns in his first start for Greenwood against Choctaw, Okla.. ... Greenwood stopped Har-Ber six times on fourth down while posting a shutout over the Wildcats.

ON THE AIR The game will be lived-streamed through Siloam Springs' athletics website siloamspringsathletics.com.

BETWEEN THE LINES Siloam Springs and Van Buren have played each year since 2012 with both teams winning four games. ... Siloam Springs lost five turnovers to lose 35-21 to Van Buren in 2019. ... Jaiden Henry had a 99-yard kickoff return, caught a 56-yard touchdown pass and intercepted a pass in last year's game. ... Van Buren beat Springdale 48-28 to open the season and won the "Battle of the Bone" rivalry game 35-0 against Alma. ... The Pointers were defeated by Choctaw, Okla, 28-10 in their last game on Sept. 11. ... Quarterback Gary Phillips did not play in the Choctaw game and the Pointers were limited to 96 yards of offense. ... Siloam Springs is coming off a 34-14 win over Harrison on Sept. 11, the Panthers' first win in the series since 2015. ... Elijah Coffey had five receptions for 92 yards and a key interception against the Goblins. ... Siloam Springs' offense is averaing nearly 535 yards of offense per game. ... The Panthers have rushed for 981 yards as a team in three games, while quarterback Hunter Talley has completed 38 of 53 passes for 623 yards and six touchdowns.

BETWEEN THE LINES Ozark and Harrison agreed to play tonight after their original opponents canceled earlier this week because of covid-19 concerns. Ozark was supposed at play Dardanelle and Harrison was scheduled to play at Farmington. .... Harrison beat Magnolia and Mountain Home before losing to Siloam Springs. The Goblins are led by senior quarterback Cole Keylon, who has thrown for 745 yards and eight touchdowns. He's also rushed rushed for 363 yards and four TDs. .... Ozark has a strong runner at quarterback with senior Harper Faulkenberry, who accounted for five touchdowns in a 54-21 win over Charleston last week. Faulkenberry rushed for 179 yards and four touchdowns and threw for 55 yards and a TD against the Tigers. .... Eli Massingale added 107 yards and a touchdown against the Tigers.

BETWEEN THE LINES Huntsville has consecutive wins over Clinton and Lincoln, the Eagles' first win streak since beating Gentry 35-6 and Berryville 21-14 in the opening two games of 2018. Huntsville yielded just 281 yards and forced three turnovers two weeks ago against Lincoln. ... Gentry beat Lamar in Week 1 by rolling up 257 yards and forcing two turnovers. ... Huntsville returns to the 4A-1 after spending two seasons in the 5A-West. ... Gentry started 10 sophomores in the season-opener.

BETWEEN THE LINES Charleston was slammed by Class 4A Ozark last week 54-21. ... Greenland rolled to a 50-28 win at Berryville. ... The Tigers were unable to contain Ozark quarterback Harper Faulkenberry, who ran for 172 yards and accounted for 5 touchdowns. ... The previous week, Charleston knocked off previously unbeaten Pottville. ... Greenland RB Jett Dennis ran all over Berryville, rushing for 287 yards and a pair of touchdowns. ... The Pirates dominated the second half after leading just 28-20 at halftime. ... Greenland QB Gabe Wilson also ran for a touchdown last week.