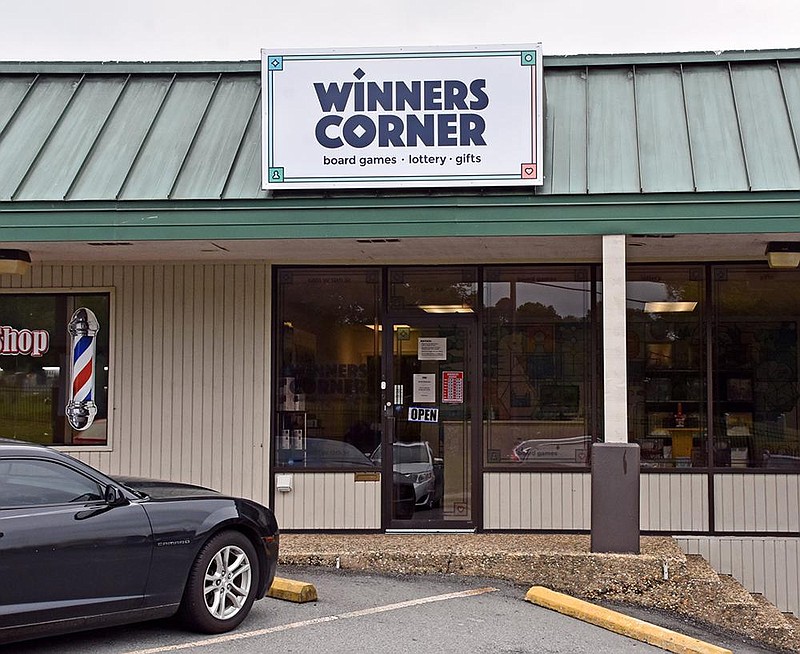 The Winners Corner lottery retailer in Little Rock is allowing people to buy draw-game tickets from the comfort of home through the mobile app Jackpocket. (Arkansas Democrat-Gazette/Staci Vandagriff)

A mobile phone app that allows lottery players in Arkansas to buy draw-game tickets through their smartphones and collect their winnings without leaving home is now available through a lottery retailer in Little Rock.

"Jackpocket gives players a safe, convenient option for playing the lottery games they know and love from home," Jackpocket founder and CEO Peter Sullivan said in the news release.

"Launching in Arkansas was a natural fit, and we look forward to helping the Arkansas Scholarship Lottery drive additional revenue supporting college scholarships," he said.

Arkansas' lottery players can now order tickets through the mobile app for draw games such as Mega Millions, Powerball, the Natural State Jackpot, Cash 3, Cash 4, and Lucky for Life, according to Jackpocket.

Jackpocket spokeswoman Becky Barnes Campbell said Thursday that Arkansas lottery players buying draw-game tickets through the mobile app "must be of age and physically located in the state at the time the order takes place, but need not be residents of Arkansas.

"Jackpocket utilizes industry-leading geolocation technology to ensure all plays happen within the state," she said in a written statement. There is no added cost to buy the ticket from the retailer through the mobile app, she said.

"It works the same anywhere in the state," Campbell said. "Players place ticket orders through the app and Jackpocket staff then fulfill the order by purchasing tickets on the player's behalf from the Arkansas lottery retail location, Winners Corner. The ticket is printed, scanned front and back, and uploaded into the app for easy viewing. Again, it's similar to other courier models we use for convenience purposes."

No Arkansas Scholarship Lottery rules prohibit or authorize the use of an app-based ordering system for the purchase of hard copy lottery tickets generated through a licensed lottery terminal, Hagler said.

"The generation of the hard copy ticket is the same for those who purchase lottery tickets through Winners Corner in the traditional over-the-counter method," Hagler said in a written statement. "The hard copy tickets ordered through the app are available for pickup at the Winners Corner retail store in Little Rock, where they are held in safekeeping for the customer. It is similar to curbside delivery."

He emphasized that app-based ordering of hard copy lottery tickets is not an iLottery activity.

"Rather it is a way to safely (contactless) to place an order for hard-copy tickets generated through a licensed lottery terminal in the ordinary course," Hagler said in his written statement. "Any representation otherwise is unsupported in fact."

Arkansas lottery officials would welcome other retailers that have an interest in pursuing this option, but it's unknown whether the other retailers will seek to use ordering lottery tickets via an app, he said.

"The pandemic environment is forcing retailers to seek 'contactless' transactions in order to protect their customers and staff," Hagler said. "Just as car dealers and grocery stores, as well as other retailers, are adopting contactless delivery of retail products, convenience stores and other retailers selling lottery tickets are migrating to the same approach with public safety and convenience in mind."

He said other state lotteries allow app-based ordering, and the approach and business model is dependent on each state's law.

Jackpocket first launched its service as a yearlong pilot program in New York state during 2015 and 2016, Campbell said.

In addition to offering convenience, Jackpocket's news release said it provides a new way to play the lottery through features that include:

• Autoplay through which players can create "autoplays" to automatically enter drawings for the lottery games of their choice.

Since April, the lottery has experienced a surge in scratch-off ticket sales, while draw-game ticket sales have been largely flat with the Mega Millions and Powerball jackpots failing to exceed $500 million like they periodically did for a few years before fiscal 2020.

In fiscal 2020, which ended June 30, the lottery's total revenue set a record of $532 million, fueled by rising sales of scratch-off tickets during the pandemic.

But the amount raised for college scholarships dropped by $9.2 million from the previous fiscal year to $89.4 million. Woosley has said the decline in the net proceeds in fiscal 2020 "is solely based on the terrible draw game sales we had," and the sales for the Powerball and Mega Millions games "were the worst we've ever seen."

Oaklawn Racing Casino Resort has an app that allows a different type of gambling, on horse racing there and at other tracks.

Scott Hardin, a spokesman for the state Department of Finance and Administration, which the lottery is part of, said the Oaklawn Anywhere app allows wagers to be placed on live racing.

"This is allowed via statute and is specific to racing. Wagers may not be placed on any casino-related games or the sportsbook," he said. "Casino and sportsbook wagers must be made on the casino property."