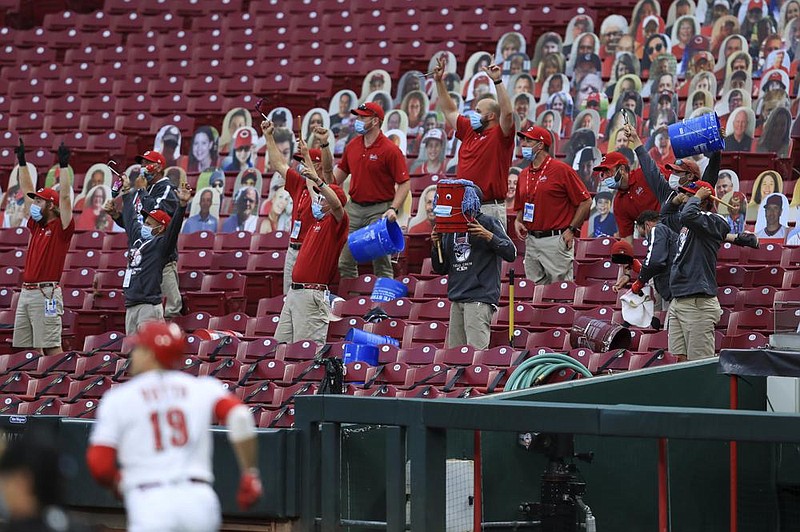 Members of the Cincinnati Reds’ grounds crew react as Joey Votto runs the bases after hitting a two-run home run during Wednesday’s game against the Milwaukee Brewers in Cincinnati. (AP/Aaron Doster)

The absence of fans didn't stop Cincinnati Reds first baseman Joey Votto from receiving an ovation after hitting a home run to put his team ahead for good.

All that applause Wednesday came from the Reds grounds crew. When they haven't been keeping Great America Ball Park in tip-top shape, the groundskeepers have loudly cheered for the Reds from the stands.

Teams throughout the major leagues have found different ways to maintain intensity without the benefit of fans in the ballpark. The Milwaukee Brewers have formed a makeshift band in the bullpen. Whenever Minnesota's Sergio Romo leaves the bullpen to pitch, the other Twins relievers play maracas.

But the most notable example arguably involves the Cincinnati grounds crew.

Votto, who gave the crew noisemakers earlier this season, said the groundskeepers' constant cheering even caused an opposing player to comment to him.

"He said, 'I hate that group,' " Votto said. "And I thought, 'That's exactly what we want.' That's exactly what we want. We want the opposing team to hate, to be annoyed by them. I think they don't care in the least. They've carried us at times, where we need energy, where we need, I don't know, something different. They've made noise. They cheer. They talk mess. They've been fantastic all year."

Some of the Reds even made sure to meet the groundskeepers and thank them Wednesday after closing their home schedule with a 6-1 victory over the Brewers.

"I can say having the grounds crew in our corner, I felt like was a distinct advantage for us because no other city had that," Votto said. "No other city had a group that was willing to make noise, make musical noise, talk mess to the opposing first-base coach and players and support the team."

In fact, plenty of other teams also figured out how to energize otherwise empty ballparks. In most cases, it involved the players taking the responsibility upon themselves.

Brewers reliever Brent Suter has led Milwaukee's bullpen band that cuts through the piped-in crowd noise at Miller Park. Suter and his teammates discovered they could use different equipment to establish a beat.

"We got a bat hitting one of those metal chairs," Suter said. "Then we have some mallet that is used to break in gloves, and we are hitting it against the dummy out there. And then some guys are using their feet to hit the garbage can. And other guys are slapping the pads and all that. We got a little bullpen band out there. It's pretty fun."

Suter said the idea came during a stretching exercise.

"We just said, 'Hey, listen, our energy could be better so let's turn it up a little bit. It can start out here in the bullpen. We can bring some energy, bring some noise to the guys,' " Suter said.

The Twins have their own musical routine every time the song "El Mechon" plays to signal that Romo is entering the game.

"It's fun," Twins reliever Trevor May said. "I just had the idea in summer camp just because he actually inspired me. He was yelling during our intrasquad games and he's all you can hear. It was like, 'We can do anything out here. It doesn't matter.' I ordered some maracas on Amazon. We only play it when his song comes on. People ask us why we don't take them on the road. They don't play his song when he runs out there. It's awkward when there's no 'Mechon' playing."

The Twins have even found a storage space in the bullpen for the maracas.

"There's a tarp hanging there," May said. "We created a little pocket. We just put them in there."

Detroit Tigers interim manager Lloyd McClendon was still the Tigers' bench coach earlier this month when he discussed the importance of players creating their own energy but added a caveat.

"Some of the stuff that's going on in baseball, I don't like it, the drumming, the banging," McClendon said. "Particularly with all the problems we've had in the past, I just don't think it's appropriate."

McClendon didn't specify what past problems he was referencing, but the biggest story of the most recent offseason involved the 2017 Houston Astros' sign-stealing that included banging on a trash can.

Without fans in the stands, teams have needed to get creative as they seek the energy required to get through the grind of even this pandemic-shortened, 60-game season. Reds Manager David Bell believes his team's grounds crew has made a difference as his team chases its first playoff berth since 2013.

"Very, very much appreciated," Bell said. "I'm sure it equaled a couple of wins along the way, and we know how important those are." 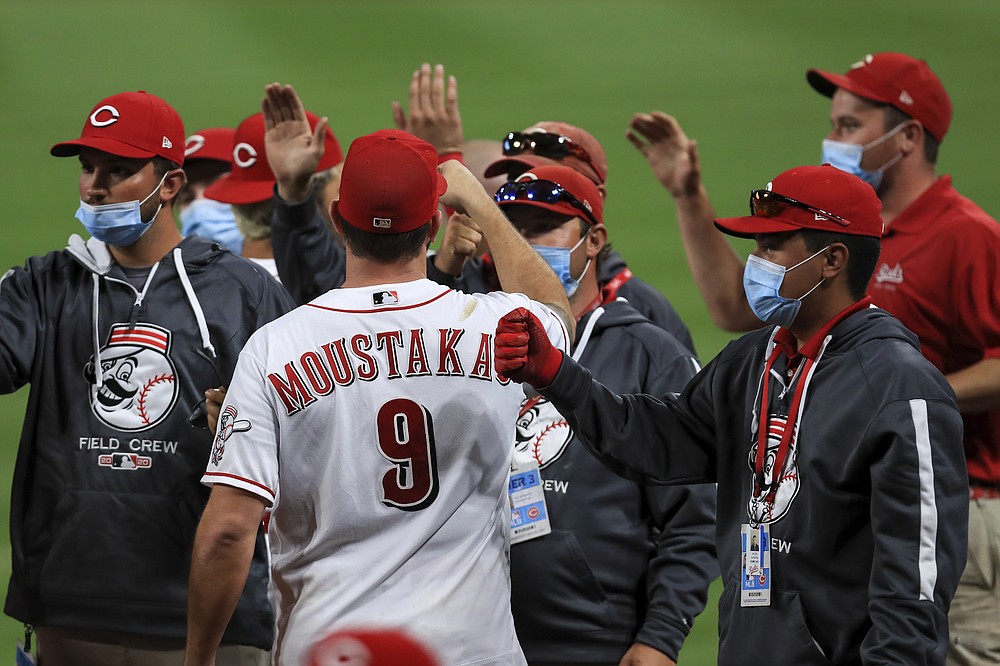 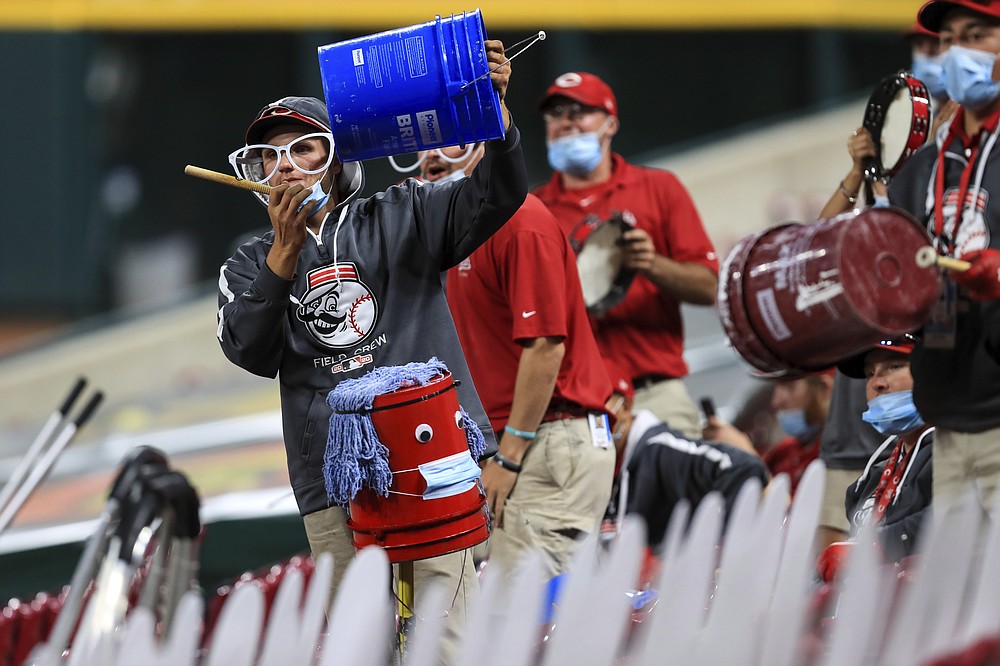 Members of the Reds' grounds crew acknowledge Cincinnati Reds' Trevor Bauer as he stands in the dugout in the ninth inning during a baseball game between the Milwaukee Brewers and the Cincinnati Reds in Cincinnati, Wednesday, Sept. 23, 2020. The Reds won 6-1. (AP Photo/Aaron Doster)
ADVERTISEMENT