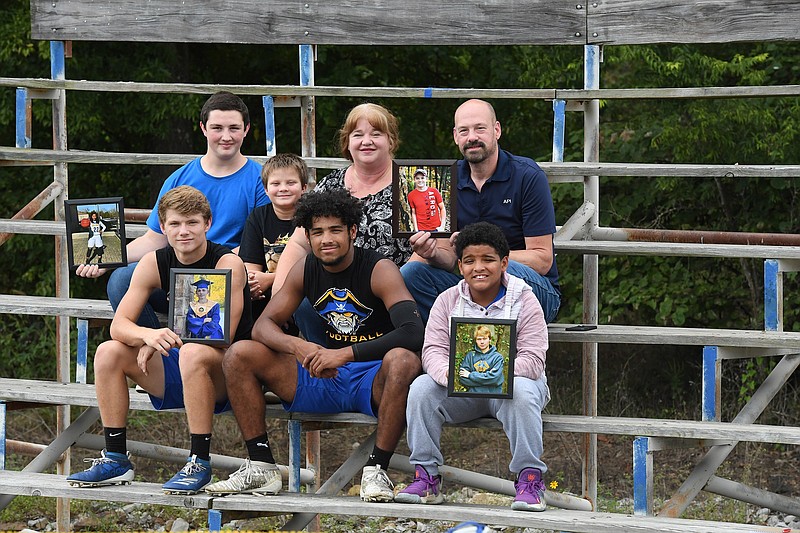 CEDARVILLE -- Angie Kattich thought she would never cuddle a baby of her own. Late-night feedings and the endless changing of diapers were not in the plans for Angie and husband, Mark.

That's the thing about plans, though. Often they change, and sometimes change comes quickly.

"We found out pretty soon after we got married that we were having issues trying to have children," Angie said. "We had 12 years of infertility, so we finally just gave up. Then a friend of ours adopted through foster care and that gave us the idea, so we thought we'd try to foster to adopt."

After going through the necessary steps to become foster parents, Angie and Mark, high school sweethearts at Cedarville High School, prepared to become parents for the first time.

Nothing could have prepared them for what came next.

"We had been married 12 years with no children," Angie said. "In three months we had six kids under the age of four ... three in diapers."

[Don't see the video above? Click here to watch: https://www.youtube.com/watch?v=Ze89mOiJTsk]

Darryl Kattich (6-foot-1, 190 pounds) was one of the original Kattich patch kids, one of the three in diapers. He was the baby of the bunch with four older brothers and an older sister.

Life for Angie and Mark would never be the same.

"I was three weeks old when I was adopted," said Darryl. "Growing up in a large family has been amazing. My older brothers and sister have pushed me and have always been there for me."

Mark and Angie admit the explosion of children did provide challenges, but the couple managed to keep their heads above water despite being vastly outnumbered.

"We went into it to adopt," Angie said. "We wanted to adopt children and they said if you foster, then there are lots of children who come up for adoption. They told us from the get-go that the first six children that we had, they probably might not all come up for adoption, so we just fostered. So about two and a half years into fostering them, they all came up for adoption at once. All at the same time. And we were like, 'can we do this? Well, we're doing it already.'

"So we just took the plunge and adopted all six."

Since adopting the original six children, the Kattiches have added to the family. They adopted Dakota, then their plans expanded even further when Angie found out she was pregnant and along came Grayson, who is now the baby of the family.

"God has a sense of humor," Angie said.

On Friday nights in the fall, it's easy to spot the Kattich family. They are decked out in the Pirates' blue and gold colors and they are the loudest fans in the stands, especially when No. 22 gets his hands on the football.

Darryl has grown from the baby of the Kattich clan to a 6-foot-1, 190-pound junior who would just as soon run over a tackler as around one.

Mark Kattich said Darryl had to learn from an early age to compete with the older siblings.

"It can get crazy," Mark said. "It's a constant battle. Everything is a competition from the time they were about 5 years old."

Darryl has been clocked at under 4.7 seconds in the 40-yard dash and can bench press 240 pounds and squats more than 400. He flashed that speed earlier this season by taking a toss from his own end zone and racing 99 yards for a touchdown against Berryville.

He joked -- only slightly -- that he probably increased his speed by trying to be the first to the dinner table every night.

"There might not be anything left if you're last," he said. "As soon as my mom says dinner is ready, I get there. It was crazy with eight kids in the house, but it helped me. It made me tough."

That toughness helped him make a quick adjustment to the varsity football team last fall, rushing for more than 1,500 yards and 18 touchdowns as the Pirates went 6-4. This season, Cedarville is the favorite in the 3A-1 Conference with a strong senior and junior class, and Kattich has picked up right where he left off last season. In three games and in very limited action because of lopsided scores, he has rushed for 667 yards.

Washausen, who comes from the legendary Tom Tice coaching tree through his days as a player and coach at Prairie Grove for Danny Abshier, said Kattich is the best back he's ever coached.

"The thing about Darryl is that he puts in the work," Washausen said. "He's never going to miss a lift. He's playing all these sports year-round and he's constantly working to get stronger.

"I want him to do it all. I have not seen a kid that competitive. Everything he does, he just wants to win."

Being from a large family with white parents has not shielded Darryl from racial issues both on and off the field, he said.

"It's there. I've had issues. I hear it," he said. "There's nothing you can do about it. I think about how I can't do anything stupid. That can't help me to do the things I need to do.

Mark Kattich recalled back to when he and Angie were preparing to take the plunge into adoption with six small children who they would be responsible for.

"I had people ask me why would you adopt them?" he said. "Well, after you raise them for a year or two, you're automatically family. You love them to death. You can't just string them along. Everybody wants to have a family.

"I only wanted two kids. That was my original plan. Now I've got eight."

Sports have always been a focal point for the Kattich family. Mark played for the Pirates in the early 1990s and has coached in the community's youth football program.

With older siblings involved in sports, Darryl always tagged along.

"I remember when we had them when they were little and Darryl wasn't even old enough to play," Mark said. "His older brothers were on the baseball team. The coaches said why don't you let Darryl try. I thought, well, he's too little. But he was a natural. He could throw and hit it off the tee. So we just put him in there with his older brothers to get him started. He's got a natural talent. That's what everyone says, he's just naturally talented. It's crazy how he grew up and just always knew what to do.

"His sister (Chanel) was the same way. We coach pee wee football. We were coaching the first and second graders and we were just getting our butts stomped. And she came out on the field and said 'Dad, move this one over here and this one over here. This is the weak side. You have to go to the weak side.' I said, 'here get in the huddle and tell them.' And we scored a touchdown. It was the only touchdown we scored all year. I said 'OK, you're now my assistant coach. Or you can be the head coach.'"

Chanel was also a standout on the basketball court at Cedarville and now she's on the women's basketball team at the University of the Ozarks in Clarksville. Two older brothers are in the Marines and another lives in Texas. Jonathan recently graduated, Dakota is in middle school and Grayson is in elementary school.

The Kattiches have also opened their home to a couple of Darryl's high school teammates.

Asked how she maintained a sense of sanity with constant chaos all around her, Angie just smiled. It's what she and Mark wanted for 12 long years.

"Just pray a lot," she said. "Never give up on them. Sometimes it just takes that one person to believe in them. Even when they are at their worse, never quit. Never give up." 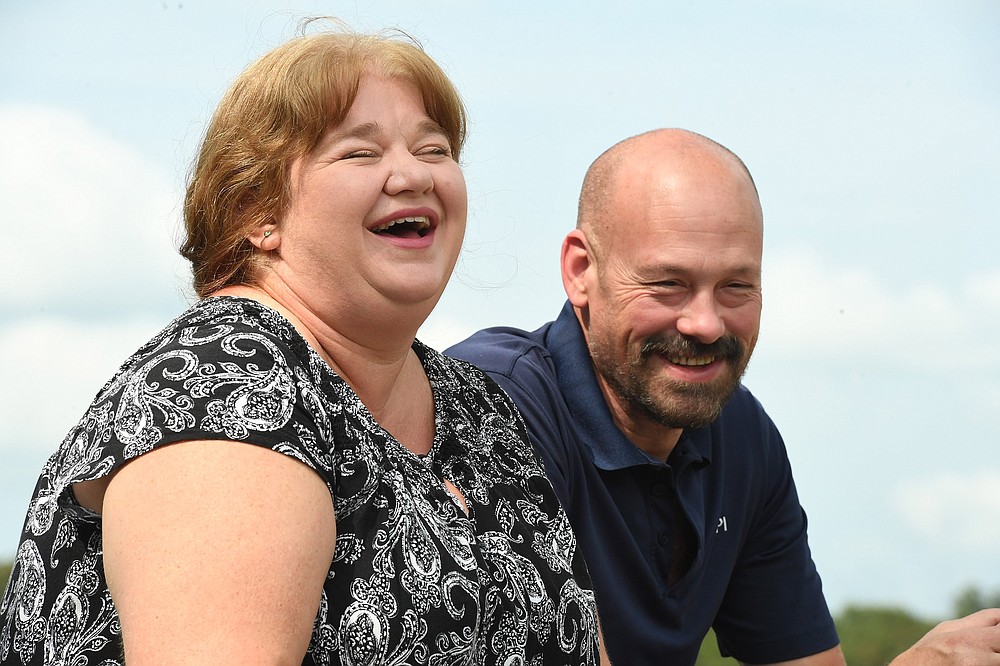 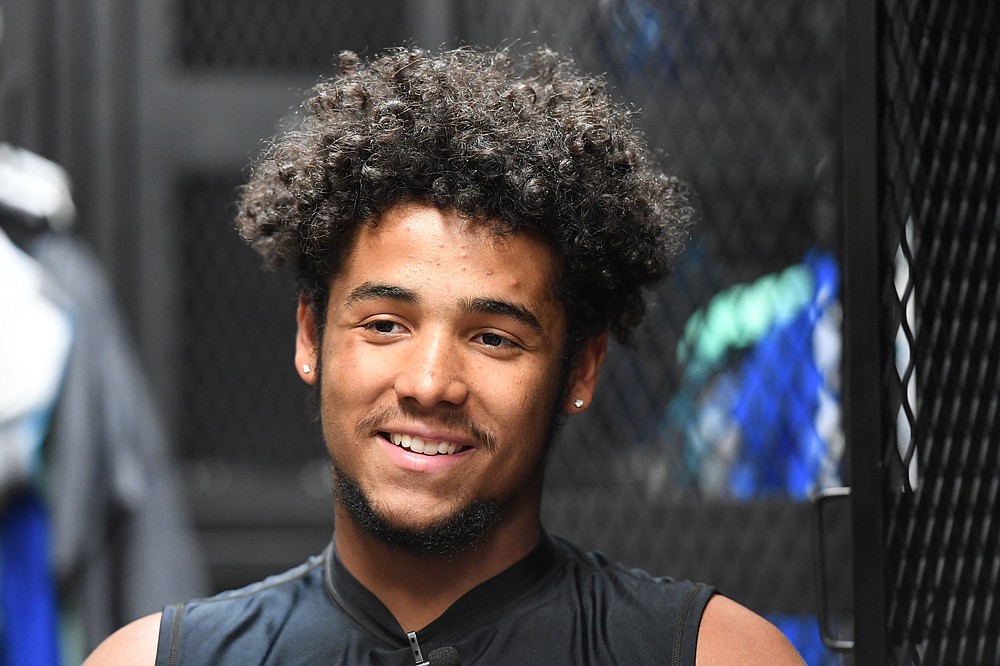 Darryl Kattich of Cedarville is one of the top running backs in Northwest Arkansas. He is seen here sept. 14, 2020. (NWA Democrat-Gazette/J.T.WAMPLER) 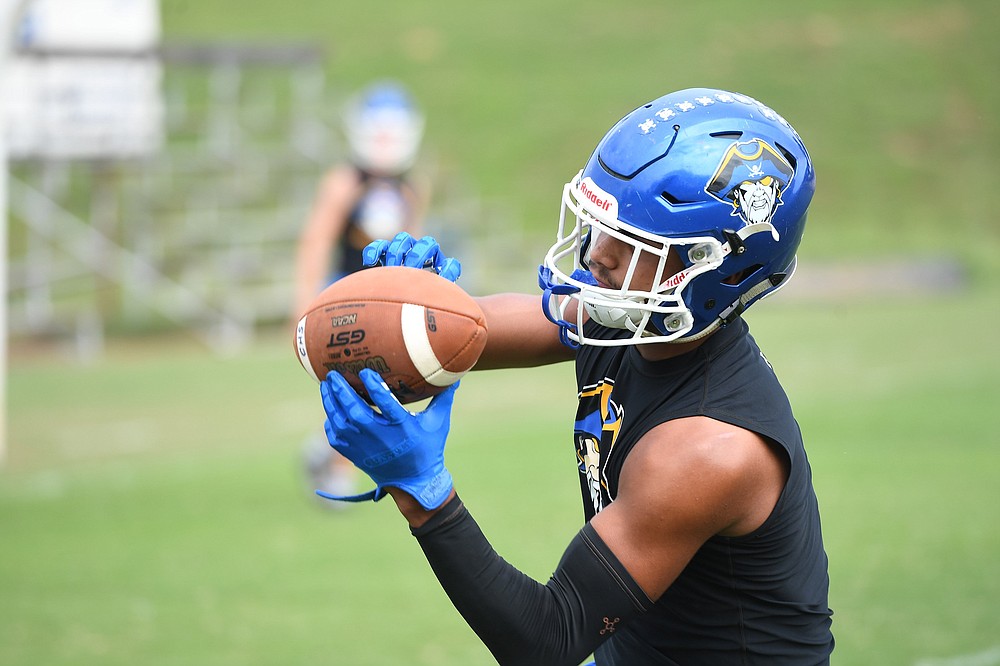 Darryl Kattich of Cedarville is one of the top running backs in Northwest Arkansas. He is seen here sept. 14, 2020. (NWA Democrat-Gazette/J.T.WAMPLER)
More News

NOTABLE Rushed for 1,511 yards and 18 touchdowns as a sophomore in 2019. … Also recorded 60 tackles at outside linebacker. … In three games this season, leads the state in rushing with 667 yards including a 99-yard touchdown run against Berryville on just 51 carries. … A four-sport standout at Cedarville in basketball, baseball and track in addition to football. … Comes from a large family of seven brothers and a sister.