Waiver of sanctions extended for Iraqis 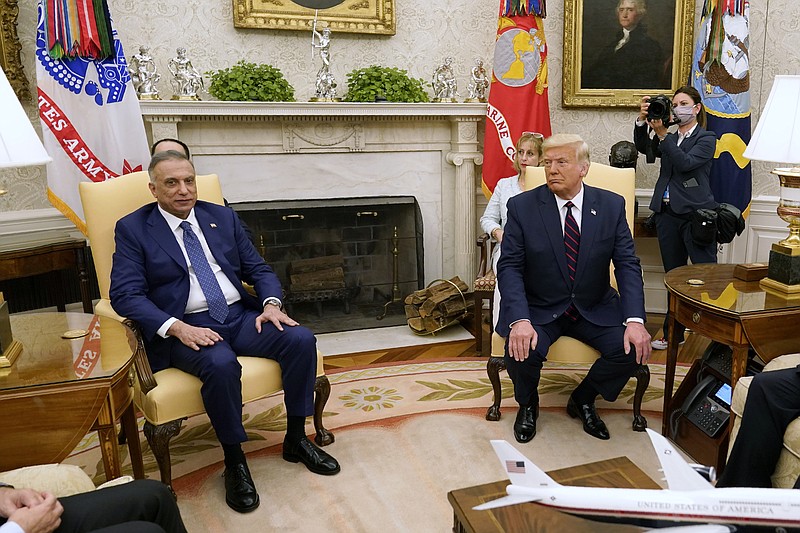 FILE - In this Aug. 20, 2020 file photo, President Donald Trump meets with Iraqi Prime Minister Mustafa al-Kadhimi in the Oval Office of the White House, in Washington. The U.S. has extended a sanctions waiver that enables Iraq to continue importing gas from Iran but this time granting a significantly shorter waiver period, Iraqi officials and the U.S. State Department said Thursday, Sept. 24, 2020. Iraqi officials expressed surprise at the new, stricter waiver as it comes just one month after al-Kadhimi’s Washington visit hailed as a success. (AP Photo/Patrick Semansky, File)

BAGHDAD -- The United States has extended a sanctions waiver that enables Iraq to continue importing natural gas from Iran but this time granting a significantly shorter waiver period, Iraqi officials and the State Department said Thursday.

The development is a sign of unease in U.S.-Iraq relations amid near-daily attacks targeting the American presence in the Middle East country and underscores the standing U.S. demand that Baghdad wean itself off dependence on Iranian oil.

Washington informed Iraq's leadership this week of its decision to grant a 60-day sanctions waiver, instead of the 120-day waiver issued over the summer, three Iraqi officials told The Associated Press. They spoke on condition of anonymity in line with regulations. The State Department confirmed the development.

The earlier, longer period had been granted when Mustafa al-Kadhimi, America's choice candidate, was selected as prime minister, but in line with waivers in place before he took office.

After his appointment, U.S.-Iraq relations were upbeat, after having reached new lows under his predecessor Adil Abdul-Mahdi's administration, following the U.S. airstrike that killed Iranian Revolutionary Guard Gen. Qassim Soleimani outside the Baghdad airport in January. Iran retaliated with a ballistic-missile strike on Iraqi bases housing American troops, wounding dozens of U.S. troops.

The Iraqi officials expressed surprise at the new, stricter waiver as it comes just one month after al-Kadhimi's Washington visit, which was hailed as a success. But the shorter time frame also signals U.S. frustration with Baghdad's inability to reign in militia groups believed to be behind a recent uptick in attacks targeting the U.S. in Iraq. The U.S. has made direct demands on the Iraqi government to clamp down on the militias.

Near-daily rocket and mortar attacks have struck the heavily fortified Green Zone in Baghdad, which is home to the U.S. Embassy, while roadside bombs have targeted convoys carrying weapons destined for the U.S.-led coalition.

On Wednesday, a roadside bombing targeted a convoy belonging to an Iraqi company ferrying materials for the U.S. coalition. The day before, three mortar shells hit the Green Zone, causing no losses.

Al-Kadhimi's meeting with President Donald Trump in Washington coincided with key agreements to boost investment by U.S. companies in Iraq's energy sector, valued at $8 billion. The deals will enable Chevron to explore and develop oil production in Dhi Qar province, Honeywell to develop an important gas hub in southern Iraq, and General Electric to boost the Mideast nation's power supply.

In its statement, the State Department said Baghdad has "faced exceptional circumstances preventing it from significantly reducing its purchase of petroleum and petroleum products from Iran."

Iraq relies on Iran for nearly 30% of its electricity needs, especially during the peak summer months. Providing evidence that Iraq is intent on weaning itself off Iranian energy dependence is a key condition for Iraq to qualify for successive waivers.

Information for this article was contributed by Matthew Lee and Murtada Faraj of The Associated Press.