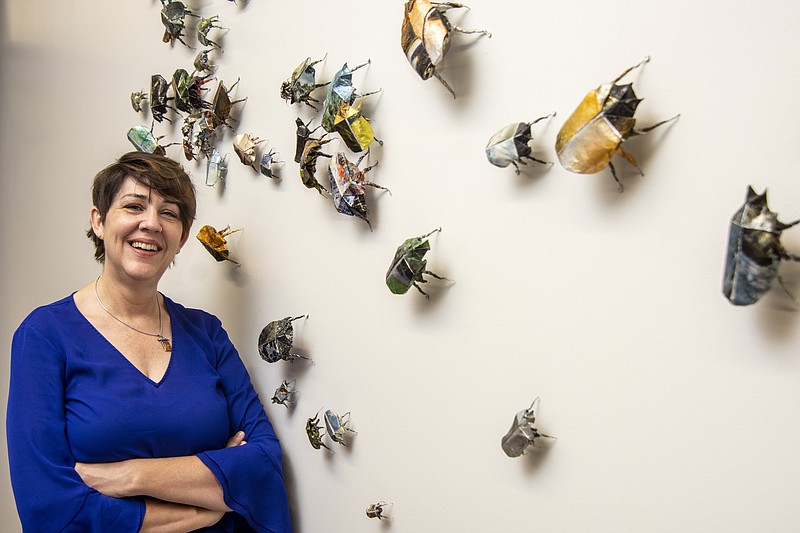 Joli Livaudais, an artist and assistant professor of photography at the University of Arkansas at Little Rock, with just some of the beetles she makes using photographs and origami. Her work is part of the “Paper Routes — Women to Watch” exhibit that opens Oct. 8 in Washington. (Arkansas Democrat-Gazette/Cary Jenkins)

Yikes! This wall is covered in beetles. Hundreds of them.

They creep down from the ceiling and gather in bunches around the ventilation pipes in the office at the Windgate Center of Art + Design at the University of Arkansas Little Rock. A few look to be scurrying farther into the space, while some have found their way to the other side of the door.

These colorful creatures — shiny and metallic, big and small — are the creation of Little Rock artist Joli Livaudais. Her installation, "All That I Love," which features 1,485 of the handmade beetles, is part of the "Paper Routes — Women to Watch" exhibit, which opens Oct. 8 at the National Museum of Women in the Arts in Washington.

"I really can't communicate how thrilled I was," she says with a chuckle when asked about her reaction to being chosen for the exhibit. "I got the news and I was so excited I could barely sit for several hours. Then I needed a nap."

Born in Illinois, the 52-year-old Livaudais is an assistant professor of photography at UALR. Her father was an engineer who helped design nuclear power plants and the family moved around quite a bit, living in New Jersey, New York, Tennessee, Texas and Louisiana.

The constant uprooting was hard, she says earlier this month during an interview in her Windgate Center classroom, but "you learn a little bit about the world. When you travel, I think it opens your eyes, but I also don't really have a strong sense of home in any one particular place."

After high school, she wanted to pursue art, but her family wasn't that keen on the idea so she spent a year in college before serving four years in the Army.

After her discharge she re-enrolled in school, earning undergrad and post-graduate degrees in experimental psychology from the University of Texas at Arlington.

"Psychology is fascinating," she says. "There is a lot of kinship between psychology and art. It's all about questioning motives and questioning the world."

All along she was making art on the side, though during graduate school she had to let it go.

"I didn't have time for art, and I felt like I'd been crippled. I'd never really experienced that. I'd always had it in my life, so when it was cut off, I felt like I'd lost a limb."

She'd planned to pursue her doctorate but instead went to work as an assistant to a freelance photographer around Dallas.

She learned the trade, opened her own commercial photography studio and was almost 40 when she went back to school for her Master of Fine Arts.

Livaudais was also married to her husband, Jason, and they were raising their son, Benjamin, who is now 13.

"It was tough trying to balance all those things," she says. "But I was motivated. I didn't sleep much."

Mia Hall was a professor and ran the furniture design program at the school when Livaudais came on board.

"We often used each other for conversations about artwork and the aesthetic merits of artwork ... and the conceptual backbone of work," says Hall, who is now executive director of Penland School of Craft in Penland, N.C. "As an artist, it's a challenge to make people stay and understand why that piece exists and not just look at it and then just move on. We would talk about how you invite people in, how do you make sure they stay with it."

Speaking of Livaudais' beetles installations, Hall, says: "You come across an accumulation of hundreds, even thousands of these beetles and think that's a pretty phenomenal work ... she goes through this extremely labor-intensive process to create these beetles, that makes the work so much stronger and richer. And the longer you stay with it, you have these little discoveries ... every single aspect of her work is so well thought out."

Livaudais, who often has several projects going at once and whose photography uses historical processes and methods like gum bichromate printing, started making beetles while working toward her MFA (they were actually part of her thesis).

"They became a sort of meditation," she says. "And a way to have something ongoing."

While she used digital photography in her commercial work, Livaudais leaned toward tactile projects for her fine art.

"I was thinking about the paper and the print and I thought, well, what if we made it an object? What can the paper do? How can I change the substrate?"

Each beetle starts as a photograph, often of something personal like her son or of images from her daily life.

"They're representations of little slices of time that are special to me or beautiful or important to me," she says.

The photo is printed on mulberry paper called kozo. Livaudais then bonds it to aluminum foil and folds it into an origami pattern that was originally created by Japanese artist Katsuhisa Yamada and that she modified.

"The actual folding takes about a half-hour, and I think there are 65 steps to the fold," she says. Often, instead of holing up in her studio, she will fold beetles while watching TV with Jason and Ben.

She uses twisted straight pins from a sewing kit for the critters' legs, which is also how they are affixed to walls and ceilings (some are also held in place by screws).

She paints them with epoxy resin.

"That does two things," she says. "It hardens the beetle and it saturates that thin mulberry paper so you can see the glimmers of that aluminum base underneath. It makes the beetles appear metallic and iridescent, which is what I was looking for."

Indeed, her beetles — scarab beetles, which were revered in ancient Egypt and were a symbol of the sun god Ra — with their intriguing designs on their stout bodies are less Wednesday Addams-creepy-crawly-Goth and more thoughtful with maybe a hint of whimsy (though some people do get a little freaked at seeing them en masse, Livaudais says).

"All That I Love," the installation of beetles that will be part of the Washington exhibit, "is a meditation on the fragility and impermanence of life," Livaudais says. "We have these moments that are special to us, we have people that we love, a beautiful day, all these little things people can experience and then you lose it, it changes, it ends. But hopefully it transitions into something else."

The beauty and unpredictable power of nature is also reinforced when seeing hundreds or thousands of Livaudais' beetles spread out across walls, ceilings and floors.

"It was important to me that it not be something that seemed like I was in control of," she says. "We experience our lives and we think we have a modicum of control, but in the end, we're just along for the ride."

"Paper Routes" is the sixth installment in the National Museum of Women in the Arts' "Women to Watch" series. Along with Livaudais' work, it features art by 21 other women from the United States, the United Kingdom, Italy, Germany, Chile, France, Portugal, Spain, Canada and Argentina.

The museum, incorporated in 1981 as a nonprofit and located near the White House in a former Masonic Temple built in 1908, is the only "major museum in the world solely dedicated to championing women through the arts," according to its website.

The exhibit is a collaboration between the national museum and its outreach committees.

Barbara Satterfield is the president of the Arkansas Committee of the National Museum of Women in the Arts.

"The Arkansas Committee congratulates Joli and celebrates her selection for this internationally known exhibit," Satterfield says via email. "We're excited that viewers from around the world will see Joli's installation virtually on the NMWA website and on-site at the museum from Oct. 8, to Jan. 18, 2021."

From Glenn's choices, curators from the national museum chose Livaudais for "Paper Routes." (A state tour, beginning in January, will feature work from all four Arkansas artists).

"I was thrilled that they chose Joli," Glenn says. "It's important to recognize the work of female artists. Joli is an accomplished artist and professor. Who better to represent the state?"

Glenn says she was attracted to the way Livaudais can make a space her own.

"The way that her work is site-responsive and the fact that the work doesn't exist until she is given the space and then she configures it based on the space that she is given is fantastic. That's something I'm always drawn to."

Joli's work, "really takes over," Glenn says. "It responds to the floor, the baseboards, the walls, the ceiling. She really is quite considerate and thoughtful about space."

The show was originally scheduled for June, but the pandemic forced the move to the fall. The pandemic also has had another impact.

Normally, Livaudais would be on-site placing each beetle exactly where it needs to be. With covid-19 restrictions, however, she won't be in Washington sticking beetles onto the walls of the national museum. It's the first time she hasn't installed a work herself.

"I believe that fully half of my artwork is in the placement of the beetles," Livaudais says. "Making them is a meditation and it's also production work, but being able to make the colors interact, make the beetles interact with each other, make the patterns that flow across the wall, the impact of that is huge."

The museum has given her images of the space, and she will make sketches for installers to reference. She will also take part in an online Zoom video call to oversee the work.

"It's not like I'm totally turning it over to someone else, but I am disappointed I'm not doing it myself," she says.

Hall is happy to see her friend be part of a national show.

"She's intense. She has that drive to always become a better teacher, a better artist ... it's always been my hope that she would get into a big, national exhibition and get recognition," Hall says. "Her work is there, her drive and motivation [are] there. Not every artist can handle being discovered because with that comes a demand for volume and more work. That's a lot of pressure ... but she is definitely someone who would thrive on that."

Livaudais is working on another installation, this one depicting blades of wild grass made of folded paper, for the Arkansas "Paper Routes" tour.

There are times, she says, when she wonders what it would be like had she started her art studies earlier instead of joining the Army, studying psychology and running her photography business.

"But at the same time, I do believe that having something to say and having enough life experience that you can bring that to your artwork makes a difference," Livaudais says. "I learned a lot through being in the military, through my studies in psychology and working commercially. All of that is baked into my artwork. Who would I be if I hadn't done those things? I can't even imagine that person."