Burks gets first TD as a Hog 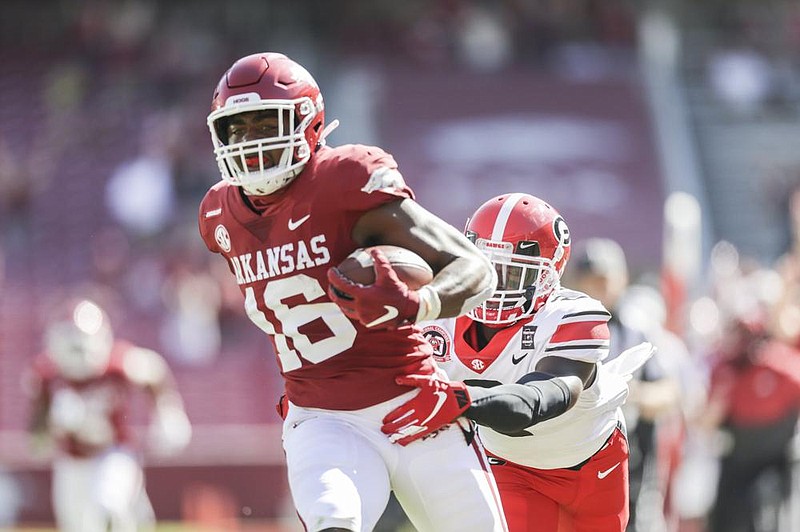 Arkansas wide receiver Treylon Burks scores on a 49-yard touchdown pass from Feleipe Franks with 8:48 left in the first quarter Saturday at Reynolds Razorback Stadium in Fayetteville. The score by Burks, who nished with seven catches for 102 yards, gave the Razorbacks a 7-0 lead. More photos at arkansasonline.com/927uark/ (NWA Democrat-Gazette/Charlie Kaijo ( Charlie Kaijo)

FAYETTEVILLE -- University of Arkansas sophomore Treylon Burks gained 866 yards receiving, rushing and returning kickoffs and punts in 11 games last season, but he never got in the end zone.

Burks finally got his first touchdown as a Razorback on Saturday when No. 4 Georgia beat Arkansas 37-10 at Reynolds Razorback Stadium.

Senior quarterback Feleipe Franks connected with Burks for a 49-yard touchdown pass to give Arkansas a 7-0 lead with 8:48 left in the first quarter.

It was part of a big game for Burks, who had seven catches for 102 yards.

"He's a really good player," Razorbacks Coach Sam Pittman said. "We certainly have to continue to try to get the ball to him more.

"He can win contested catches and he's a special player, special kid, special person. We have to continue to run him a little bit more and get the ball to him more.

"The touchdown grab he made and scored on was an exceptional play. I think that'll be things to come, but we've got to target him more."

The first one resulted in a safety when T.J. Hammonds fumbled the ball on a double reverse, lost 14 yards and was tackled in the end zone as Georgia cut Arkansas' lead to 7-2 in the second quarter.

Then receiver Treylon Burks threw an interception on a double pass in the third quarter.

"I think they weren't very good," Razorbacks Coach Sam Pittman said when asked about his thoughts of the play calls. "I mean, one of them went for a safety and one of them was a pick.

"Our offensive coordinator felt like it was time to call them and that's what he did, and they just didn't work out. I don't have a problem with how he called the game or when he called them."

Quarterback Feleipe Franks, a senior graduate transfer from Florida, made his first start as a Razorback. He made 24 starts for the Gators.

Redshirt sophomore Noah Gatlin started at right tackle for the Razorbacks after missing all of last season with a knee injury. He started two games in 2018.

The Arkansas and Georgia players and coaches met on the field before warmups with each team locking arms in a sign of unity that was agreed upon by Razorbacks Coach Sam Pittman and Bulldogs Coach Kirby Smart.

"Togetherness is something that is very important to our program," Pittman said in a statement posted on the Arkansas football team Twitter account.

"We approach everything together. Coach Smart and I talked last week about doing something with our teams prior to the game to promote that togetherness. On the field in the SEC, we are competitors. But we all have an opportunity together to help promote unity and equality in our communities and our country."

The pregame meeting also gave Pittman a chance to greet some of his former players at Georgia, where he was the offensive line coach the previous four seasons.

The Razorbacks had a number of missing players -- some due to covid-19 testing as Coach Sam Pittman indicated on Thursday -- and jersey number changes in the season opener.

"The department has had a great 10 days of testing," Yurachek said.

Wide receiver Koilan Jackson; defensive backs Myles Mason, Micahh Smith and Malik Chavis; running back Josh Oglesby; and offensive linemen Jalen St. John and Austin Nix were on the field for warmups but not in pads, seemingly indicating they were out due to injury.

Georgia improved to 11-4 all-time against Arkansas, including 9-2 since the Razorbacks joined the SEC.

The Bulldogs are 6-0 in road games against the Razorbacks – 5-0 in Fayetteville and 1-0 in Little Rock.