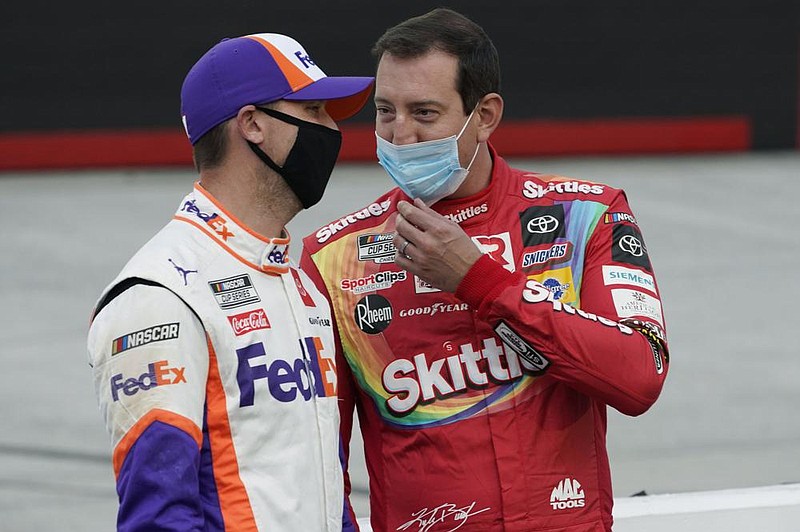 Kyle Busch (right) talks with Denny Hamlin before the Sept. 19 race at Bristol Motor Speedway. Busch enters today’s race at Las Vegas Motor Speedway winless in his past 29 starts and is in danger of being eliminated from the NASCAR Cup Series playoffs. (AP/Steve Helber)

LAS VEGAS -- Kyle Busch is in a terrible slump, winless this Cup season and his 15-year streak of at least one victory a year in danger.

The reigning Cup champion struggled to contain his frustration after finishing second last week at Bristol to title favorite Kevin Harvick as his losing streak was extended to 29 races. Busch predicted his bid to win back-to-back titles will soon be over.

"We'll be eliminated in the next round, so, don't care," Busch said after Harvick beat him at Bristol.

The second round of the playoffs begins today at Las Vegas Motor Speedway, in the city where Busch grew up and where he and his older brother, Kurt, are currently featured on the side of the MGM Grand casino. It should be the perfect spot for Busch to break his slump, but he was blunt when asked whether the No. 18 team is close to competing with Harvick and the title front-runners.

"No," was all Busch replied.

Las Vegas marks the first race in a three-race second round that goes from the 1.5-mile standard oval to high-banked Talladega Superspeedway and then eliminates four drivers from the playoffs at the hybrid road course-oval "Roval" at Charlotte Motor Speedway.

The diversity of tracks in the second round makes it the most challenging of the the playoffs' three knockout rounds, and Las Vegas is critical because a strong finish can ease pressure the next two weeks. In a city of gamblers, the best strategy today might be to play it safe.

That's a difficult position for Busch, who feels intense pressure to run well at his home track. Las Vegas rarely has been good to him, though, and he's got just one win in 18 career Cup starts.

Now his bid to become the first driver since Jimmie Johnson to win consecutive championships is on the verge of collapse.

He's ranked 10th out of 12 playoff drivers and is statistically on pace with his 2014 season, one of the worst of his career. Busch won just once that year and tied a career-low with just nine top-five finishes. And, there's only seven races remaining to preserve his streak of at least one victory a season since his 2005 rookie year.

If he indeed doesn't make it through the second round, it will be the first time since that 2014 disappointment that Busch won't race in the championship finale.

In this season of coronavirus protocols, Busch has been hampered in making the adjustments needed to get a car into victory lane. He's struggled in traffic this year and gotten bogged down in single-file runs, unable to move forward.

Busch needs to be near the front to contend and gets his chance when the green flag flies at Las Vegas. Busch starts second alongside Harvick. He's seen that Joe Gibbs Racing teammates Denny Hamlin and Martin Truex Jr. have been successful when their Toyotas get prime starting positions and is hoping things finally fall his way.

"Our teammates have been starting up front, they've been running up front and they've been doing a good job of keeping themselves in the mix on the intermediate tracks," Busch said. "If we can continue to evolve and get ourselves up a little bit higher, then hopefully that will bode well for us, too."

Harvick has been in a class of his own with five wins in the last nine races. He won the playoff opener at Darlington and then again last week at Bristol -- moving him to a career-best nine victories this season while cementing himself as the title favorite.

His challengers have been wary about this second round, but Harvick has tunnel vision and is taking it one race at a time.

"You just want to keep your mind as clear as possible. We've made a decision of how we want to think and what we want to talk about and pay attention to, and it's us," Harvick said. "I know that sounds selfish, but the thing that I can tell you is it's way less mentally exhausting than worrying about where you need to have a good race and where you need to have a bad race.

"I don't have the capacity to think more than one week ahead, anyway, and trying to overthink things just takes way too much space in my brain for me to function during the week." 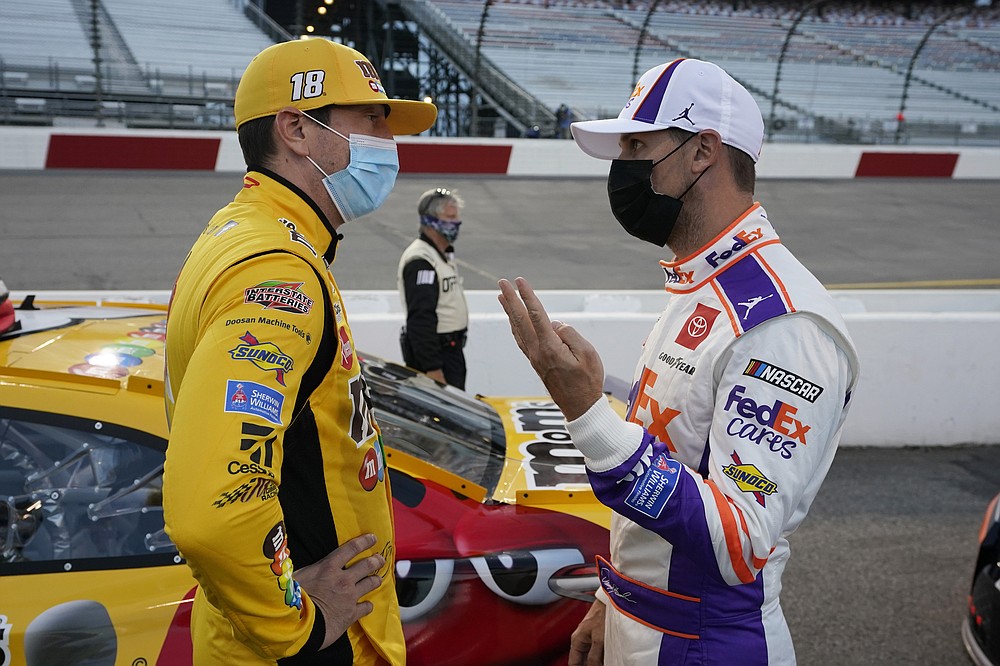 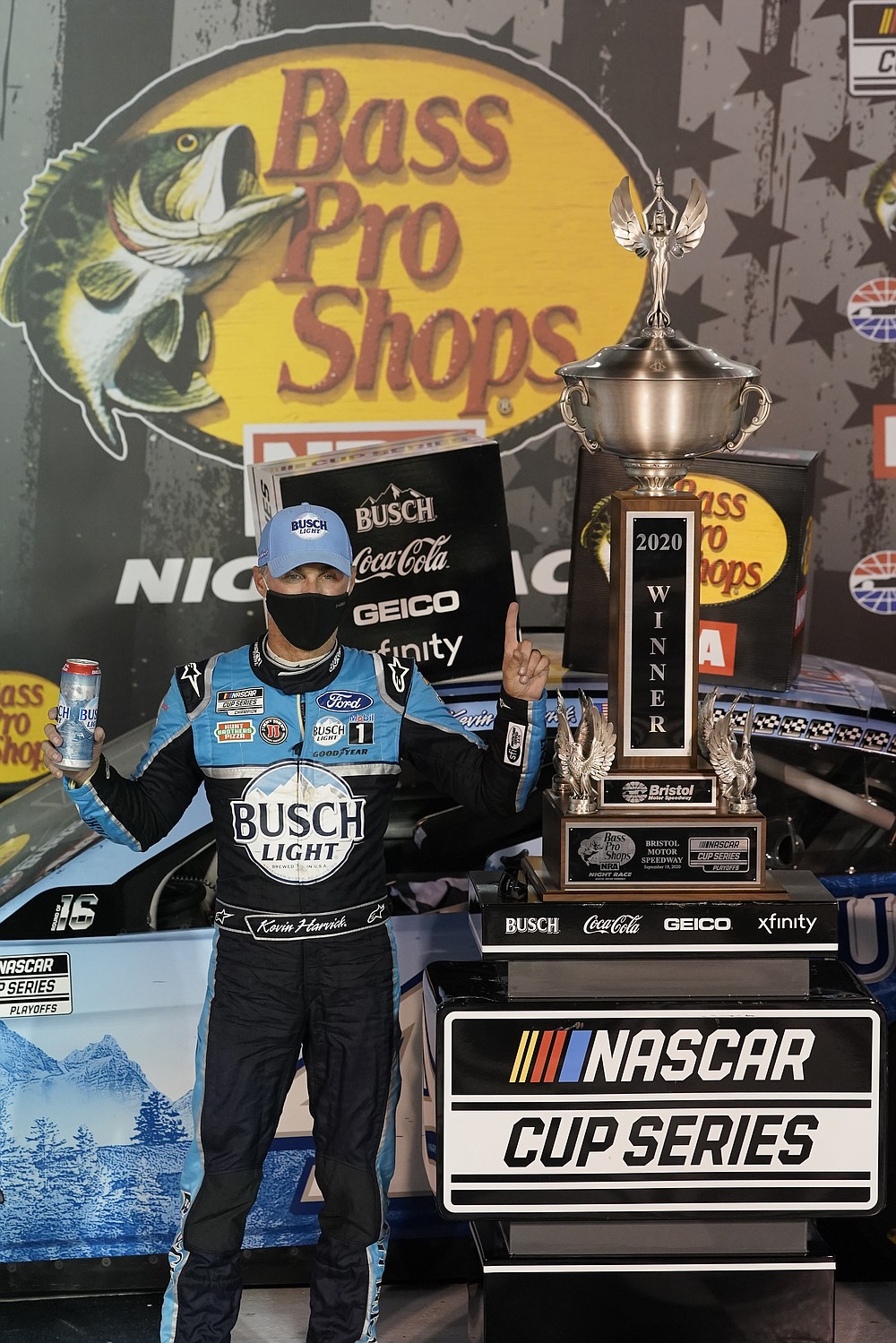 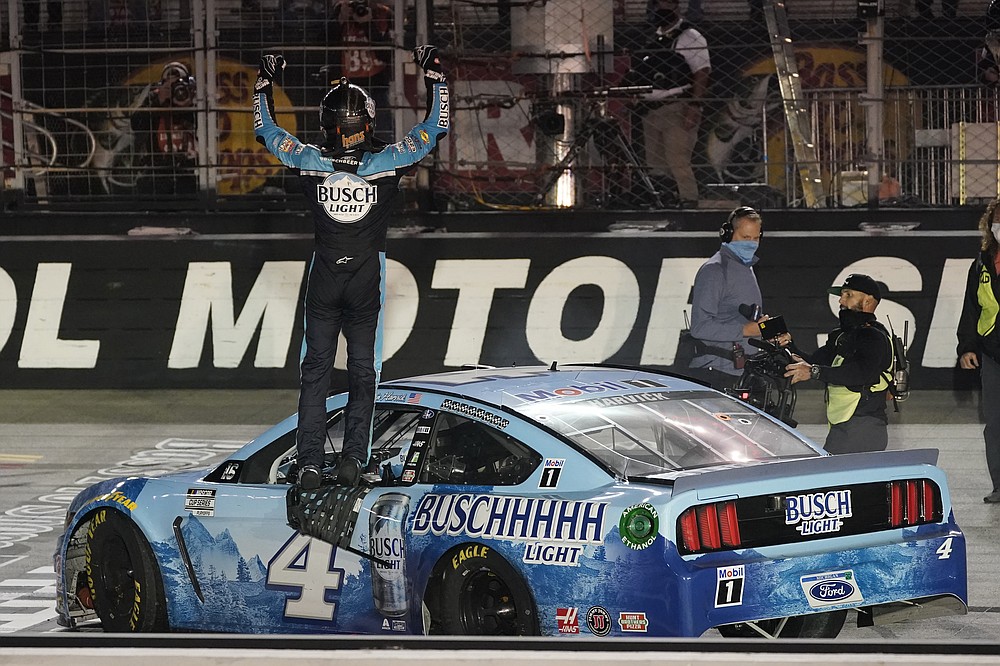