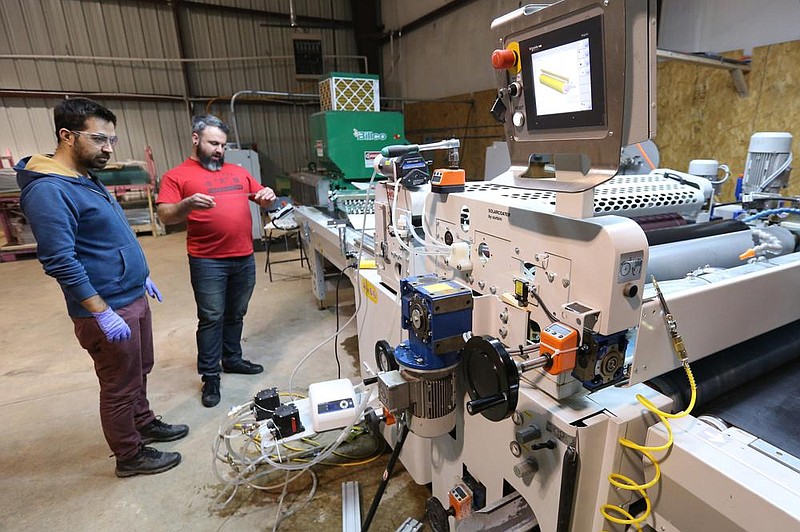 Hulusi Turgut (left), research chemical engineer with WattGlass, and Nathan Burford, research engineer, check the aesthetics of a coated piece of glass at the WattGlass warehouse in Fayetteville in this December file photo. (NWA Democrat-Gazette/David Gottschalk)

FAYETTEVILLE -- A company that makes specialized coatings for glass has been accepted as part of a Danish accelerator program aimed at helping emerging technology companies.

Fayetteville-based WattGlass is one of eight companies participating in the UrbanTech accelerator program, which seeks to take to market technologies for use in future sustainable cities around the world. The technological solutions can address climate issues and resource challenges, and add to residents' health and security.

While WattGlass' technology was developed for the solar industry, it's also being used for LED lighting in the U.S, Europe and China. The coating is mixed and shipped from Arkansas, and is based on work from the University of Arkansas, Fayetteville.

Corey Thompson, the chief executive officer of WattGlass, said working with the accelerator will open new applications and markets for the company. He said WattGlass is working with VELUX, a maker of skylights, as its partner in the program.

"We'll be able to explore what value do we bring to an urban environment from a sustainability position," Thompson said.

UrbanTech targets the world's most promising and innovative technology startups, according to the organization. It's made up of COWI, VKR Holding/VELUX and EWII, three Danish corporations with support from Realdania and the Danish Industry Foundation. The three-year program gives the startup companies the chance to grow and develop their products. The WattGlass group is the program's second cohort.

"We expect a lot from the Urbantech program because we have already seen that it can make a significant contribution to our strategic development. The entrepreneurs bring both perspective and agility to the table, and in a good interaction with us we can create something that no one had thought of before," Lars Bonderup Bjorn, CEO of EWII, said in a statement.

WattGlass, co-founded in 2014 by Thompson, a UA graduate, was initially formed as part of an entrepreneurial class taught by Carol Reeves, the associate vice provost for entrepreneurship at UA. WattGlass developed and took to market a nanoparticle glass coating developed by Thompson during his doctorate research.

The glass coating is anti-reflective, anti-fog and self-cleaning. It has applications for the solar industry and for commercial lighting. The coating system is water-based, making it a non-toxic and an easy addition to "drop in" to the manufacturing process. Other coatings are alcohol-based, which require respirators and protective clothing for employees and sealed rooms when they're applied to glass and other surfaces.

Thompson said company representatives usually travel to Denmark to participate for most of the accelerator. With the global pandemic curtailing that aspect of the program, WattGlass will still go overseas for a time, to help prototype its product, as well as for a demonstration day in late November.