More than catching: Smallmouth trip a treat for the soul and senses

HARRIET -- I never ceased to be amazed at how quickly the weather can change in Arkansas.

It rained nonstop in Hot Spring County from Tuesday through Thursday, dampening all my plans for a midweek fishing trip. So dismal were the prospects that I scoffed when a friend suggested fishing in the Ozarks.

"They're all going to be high and muddy," I said. "I've had enough of those this year to last a lifetime. I think I'll pass."

"Crooked Creek and Buffalo River haven't had any rain," he said. "They're dead low."

The weather forecast for northern Arkansas was partly sunny with virtually no chance of rain, with temperatures in the high 60s and low 70s. The USGS water tables confirmed my friend's report. There are few things in life better than fishing for smallmouth bass on an Ozark stream on an idyllic day in early fall. I was all in.

Our plan was to meet Karl Schmuecker, general manager of Wapsi Fly, at Crockett's Canoe Rental in Harriet. We were fortunate because Crockett's had already shut down operations for the fall. We just happened to call when Amanda Crockett stopped by the office to take care of some errands. If we could get there no later than 11 a.m., Crockett said, she could put us in for a 9-mile float from South Maumee to the Arkansas 14 bridge.

"At current river levels, that will take you about six or seven hours straight through, without stopping to fish, eat or anything else," Crockett said. "Y'all OK with that?"

"How far is it from Maumee to Spring Creek?" I asked.

"Four and a half miles," Crockett said.

"What if we just do that instead? Spring Creek to Arkansas 14 is a dead zone for fishing, anyway"

Crockett shrugged and said that would be fine. She was also relieved because she knows us. A 9-mile float with no fishing was not possible. Cutting that in half averted a long night for her.

Our shuttle driver and Amanda's husband is Creed Crockett, son of Bobby Crockett, a receiver on the Arkansas Razorbacks' undefeated 1964 football team.

"Your dad caught the pass that beat Nebraska in the Cotton Bowl," I said.

"He caught the one that beat Texas, too," Crockett said.

"That was a weird year," I said. "When the season started, they had a quarterback named Bill Gray. He was always changing the play at the line of scrimmage, and they were always big plays. Frank [Broyles] didn't like that and put Gray on defense full time. He put Fred Marshall in at quarterback."

"Most of the passes my dad caught were broken routes," Crockett said. "It burned Frank up. Dad was always running the bleachers on Sunday mornings."

"I'll tell you this, young lady," I said. "If I only had a dollar for every song I've sung. Every time I had to play while people sat there dr ... Well, they just sat there. They didn't do anything!"

Crockett and his daughter looked at each other and grinned.

The sky at Harriet looked very much like the sky down south. It was gray and cold, and it appeared it might rain any minute.

"You sure it's not going to rain today?" I asked my companion.

"The forecast has been revised," he said, looking at the weather app on his phone.

"It's supposed to be cooler than originally forecast, but it says no rain."

There were small breaks in the clouds when we arrived at South Maumee. By the time Crockett departed, the sky was bright blue without a trace of clouds. The sunlight was soft, and the temperature was in the high 60s. We couldn't have asked for a prettier day.

Watching ardent fly fishermen is so artful. I enjoy fly fishing, but I don't live it and breathe it the way Schmuecker and my companion do. Their relationship with the water was a pure union of body, mind and spirit. They rode together. I paddled behind them and enjoyed watching their long, looping casts dance in the sunlight.

They got out of their canoe at the ends of riffles and fished about 100 yards apart. They scarcely said a word to each other all day, but they fished with single-minded intensity.

I joined Schmuecker at a backwater where he caught a handful of longear sunfish.

"There must be some spawning beds in here because they are wearing out this nymph," said Schmuecker, who waxed poetic about the charms of an Ozark stream.

"Ozark streams are special," Schmuecker said. "They've got a pretty good diversity of fish, and you can get something to bite usually. When you're floating you're going from riffle-pool to riffle-pool. I take two rods so I can fish something heavy and something on top. But the Ozark streams, there's nothing like them."

I brought two combos. One is a 5-foot-8-inch Falcon Low Rider with a Lew's baitcaster for fishing soft plastic lures. The other was a Lew's spinning rig for throwing topwater lures, primarily a River2Sea Whopper Plopper. My biggest fish of the day, a 12-inch smallmouth, hit the Whopper Plopper, and I missed another. I caught four more bass on a watermelon/red Zoom Tiny Brush Hawg and a watermelon/candy Zoom Mini Lizard. I missed several good fish because I reacted too slowly to subtle bites.

There was a time when missing fish drove me crazy. I anguished over it. I'm not like that anymore. I chide myself when it happens and then I'm over it. I'm tempted to say I've lost my edge, but that's not really true. Some days, like Thursday, I'm happy just to enjoy the experience.

Schmuecker and our companion didn't say much about the fishing, either, but they exulted over spending such a splendid day on such a beautiful river. It's the kind of day and the kind of place that makes a soul glad to be alive. 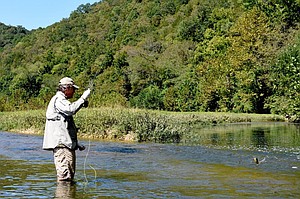 Karl Schmuecker brings in a longear sun sh with his y rod Thurs- day on the Buffalo River. (Arkansas Democrat-Gazette/Bryan Hendricks) 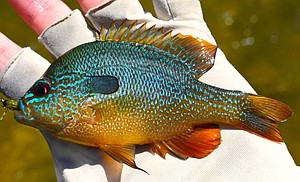 Although smallmouth bass were the targeted species Thursday, nobody ever minds catching a few longear sun fish. It’s the prettiest sh in Arkansas, but it also fights well on fly tackle. (Arkansas Democrat-Gazette/Bryan Hendricks)
ADVERTISEMENT