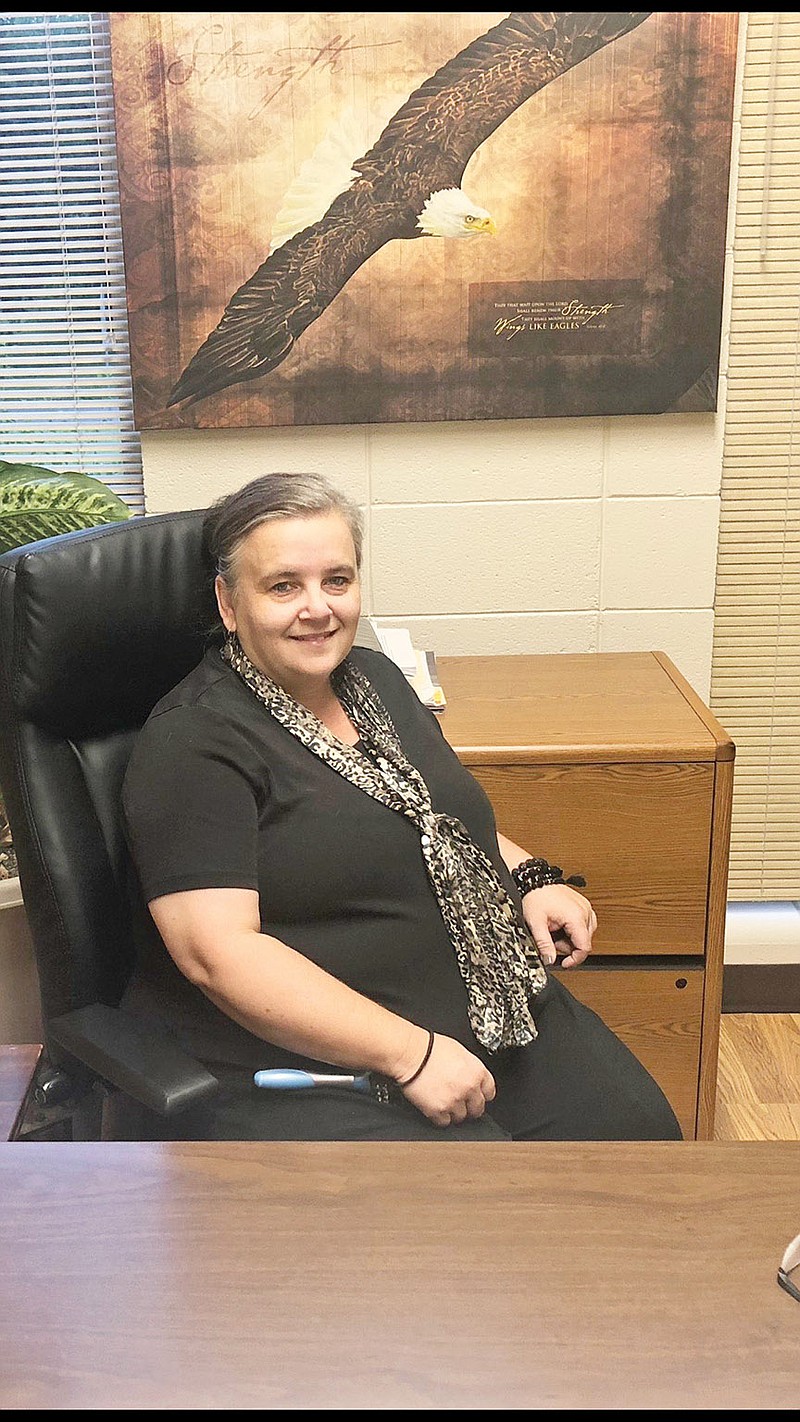 Patti Stevens is the new superintendent for the Bradford School District. She replaces former Superintendent Arthur Dunn, who retired after serving in the role for 36 years.

BRADFORD — Throughout her 25-year career, Patti Stevens has dabbled in just about every aspect of being an educator. She has spent time as a high school English teacher, a literacy coach and an elementatry school principal — all for the Bradford School District.

Now she is stepping into her new role as superintendent for the school district.

“I love helping others, and I have always valued education,” Stevens said. “My parents expected me to work hard.

She said that after spending several years as a high school English teacher, she returned to Harding University in Searcy to pursue a master’s degree in reading.

“I needed this professional growth to be better at helping my high school students who were struggling readers and to challenge those who were advanced readers,” Stevens said. “This also prepared me for the time I worked as a literacy coach in the district. Working in that role, I was able to serve a greater population, and I realized just how much I could serve the students and their families in a greater capacity.

“My goal has always been to help others and to promote education because I know the value of it, and I know it changes lives.”

She said being superintendent gives her the opportunity to do both, and she is very blessed to have this opportunity.

Stevens replaces former Superintendent Arthur Dunn, who retired after serving in the role for 36 years. Stevens said that during her time at Bradford, Dunn was superintendent for all except three years.

“After I was named superintendent for this school year, Mr. Dunn began sharing with me important things I needed to know and be prepared for,” she said. “Working with him in my position as elementary principal helped me gain insight into his daily work as a superintendent.”

Stevens said that working in the district for many years prior to her new role helped prepare her for the position.

“I am enjoying working with our administration team, our faculty and staff, students, their families and other stakeholders,” she said. “With the uncertainties that COVID-19 brings this year, we have worked through some challenges but have done so in the same way that we want our students to meet challenges as future citizens.”

Stevens said her greatest challenge has been virtual learning, but she said the district is working with parents of virtual learners, and the staff is overcoming those challenges daily. She said that along with other things, creating a successful virtual-learning plan for the students will continue to be one of the focal points this year.

“With COVID-19, there are many challenges; however, our administrative team, our Ready for Learning Committee, our faculty and staff, and our parents and students have been instrumental in a smooth start to this school year,” she said. “The safety of our students and staff is a priority, so we have many things in place.”

Stevens graduated from Bald Knob High School and earned an associate degree from Arkansas State University-Beebe. Afterward, she transferred to Harding University, where she completed a bachelor’s degree and later earned a master’s degree in reading. She said she has since completed two programs of study at Harding, including one for building-level licensure and one for district level.

Lynette Busceme, an adjunct professor at Harding University, had Stevens as a student a few years ago.

“It was probably around 2015 to 2017, when she earned her specialist degree,” Busceme said. “She is one of the most ethical people and is going to look at things at all angles and make sure she has made the right decision.

“She is very deliberate to look at all sides of a matter.”

Busceme said Stevens might describe their relationship as mentor and mentoree, but Busceme said it is much stronger than that.

“I didn’t know her until I taught her, and I don’t keep in touch with all my students in that way, but she just calls and bounces things off me, even though she always seems to have the right answer,” Busceme said. “I am her sounding board from time to time.”

Busceme said she believes the people of Bradford will be amazed at how well Stevens will do as superintendent.

“She will be an exceptional superintendent. She is outstanding.”

Stevens said that when she began teaching, she did not have the goal of becoming a superintendent; however, when she realized the impact she could have as an administrator, it became a goal.

“The Bradford School District is an excellent place to work,” Stevens said. “Bradford is a close-knit community of people who care about their school, the youth and each other.

“This is something special that I have loved being a part of and want to continue to be a part of for many years.”

Leasha Hayes, who is the Wilbur Mills Co-op assistant director, has had a working relationship with Stevens for about 10 years.

“She will be extremely successful as superintendent,” Hayes said of Stevens. “She is knowledgeable, and she also has the personality and character traits to seek knowledge.

“She will be an excellent leader. Bradford will grow and thrive and continue to be successful under her leadership.”

Hayes said Stevens cares deeply about her school and community.

“She has grown in every aspect of leadership, and she has continually sought to be more and more informed,” Hayes said. “She is a note taker; she listens to gain from what is being said.

“[In the 10 years I have known her], she has grown immensely. She has gone from being a building administrator to being absolutely ready to be a district leader.”

Stevens said she has many goals as a first-year superintendent. One of them is to work with the district leadership team, the staff and other stakeholders to lead the district through a successful first year of virtual learning.

“I also want to continue to create opportunities for students, no matter their grade level,” Stevens said. “What I enjoy most about education is seeing students learn and then seeing them apply that learning to a new situation.”