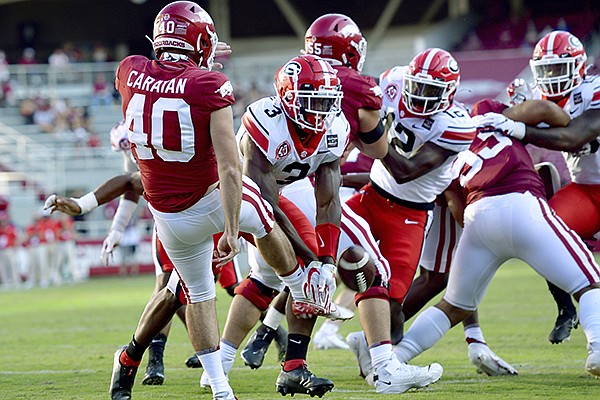 Georgia's Zamir White (3) blocks a punt by Arkansas' George Caratan (40) during the second half of game Saturday, Sept. 26, 2020, in Fayetteville. (AP Photo/Michael Woods)

FAYETTEVILLE -- University of Arkansas coach Sam Pittman threw his right arm up in the air in frustration after kicker A.J. Reed’s long field goal attempt didn't count near the end of the first half Saturday.

Rather than potentially carrying a 10-2 lead into halftime against No. 4 Georgia, the Razorbacks’ field goal unit was flagged for delay of game and Arkansas was forced to punt. Pittman had to signal for his punt team to take the field.

It was one of a number of special-teams miscues for the Razorbacks in their 37-10 season-opening loss. The all-important third phase of the game was said in the preseason to be much improved under the direction of coordinator Scott Fountain.

But the Razorbacks still have plenty to work on.

"Our guys were saying they were standing over the ball, but the bottom line is ... there was no hesitation whether we were going to kick a field goal or not," Pittman said. "Once we got the yardage to get it into a [55-yard attempt], I wanted to kick a field goal. We got it off right as it went to zero.

"I had no thought that we weren't going to get it off. Then once it got to one [second], I felt like we were going to snap the ball, but obviously we didn't until it went to zero."

Entering Saturday's game, Pittman said he thought his team would hold its own on special teams enough to possibly win that battle. Fountain had a solid game plan coming in, but the execution has to be better, Pittman said.

"We didn't play well," Pittman said. "They had so many [yards] on kickoff, on punt. They blocked a punt, [had] so many big plays, and you would think we would get the field flipped. They would get it back out to the 45 or 50 on us, and again, we played in a hole the entire first half.

"I elected to take the wind to start the third quarter, and it seemed to work out early because we had a good drive going down there. I was concerned about kicking off and not getting the ball in the end zone, and then we kicked off and the ball was 3 feet off the air and the guy returned it 45-50 yards.

The sequence that swung the momentum in Georgia's favor in a decisive 22-point third quarter was the Bulldogs' block of George Caratan's punt. Backed up against the Bulldogs' end zone, Caratan was rushed by Georgia defenders and his tipped kick traveled 9 yards.

Bulldogs running back Zamir White was credited with the block, and four plays later Georgia scored on Stetson Bennett's second passing touchdown of the quarter.

"The guy just ran right in the middle of our wedge and blocked the punt, from what I saw," Pittman said. "Now, I may be wrong, but I think they had two guys running right in the A-gaps of the wedge and went through there and blocked a punt. I heard talk on the sideline that possibly a guy came off the edge as well.

"But they really dented the integrity of the shield, and that's where the punt block came from."

To further draw Pittman's ire, Kenny McIntosh racked up 91 yards on his two kickoff returns, which included a 48-yard run in the second quarter. His 43-yard return in the third quarter sparked Georgia's first second-half touchdown that put the Bulldogs ahead for good. Georgia averaged 19 yards on its three punt returns.

Linebacker Grant Morgan, who finished with a career-high 13 tackles, said Arkansas' coverage units take their performance personally and will work to correct the mistakes.

"Special teams is something we're going to have to definitely go to work and figure out the exact little things, because special teams, one big return can be just one guy barely getting out of his spot," Morgan said. "We'll just have to go back, watch film. They definitely got a lot more yards than what we wanted to give them on special teams, but I can tell you this, no one works harder than coach Fountain.

CORRECTION: An earlier version of this story stated Arkansas' A.J. Reed made a field goal near the end of the first half. The kick appeared good from inside the stadium, but TV replays appeared to show Reed's kick was wide left. The officials on the field never signaled because of a pre-snap penalty.