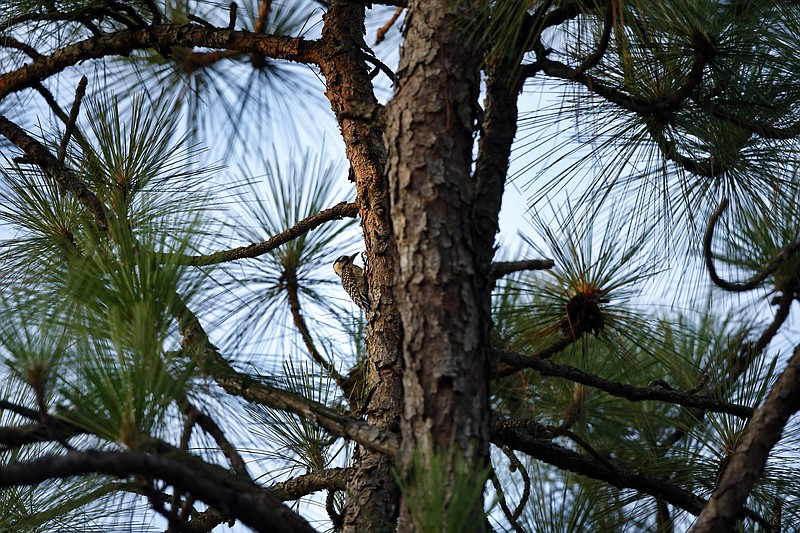 FILE - In this July 30, 2019, file photo, a red-cockaded woodpecker is seen on a long leaf pine at Fort Bragg in North Carolina. A bird declared endangered in 1970 -- the red-cockaded woodpecker, which taps pine sap to protect babies from snakes and gets its sons to help care for the next clutch of nestlings -- has recovered enough to relax federal protection, officials said Friday, Sept. 25, 2020. (AP Photo/Robert F. Bukaty, File)

The red-cockaded woodpecker, a bird declared endangered in 1970 and surviving today in 11 states' scattered longleaf pine forests, has recovered enough to relax its federal protection, officials said Friday. But not all wildlife advocates agree.

"The red-cockaded woodpecker has flourished to the point that today we can propose to downlist them from endangered to threatened under the Endangered Species Act," Aurelia Skipwith, director of the U.S. Fish and Wildlife Service, said during a news conference Friday with Interior Secretary David Bernhardt and Agriculture Secretary Sonny Perdue.

But Ben Prater, southeastern director for the nonprofit Defenders of Wildlife, said nothing released to the public so far justifies the change announced Friday at Fort Benning, Ga., one of 13 military installations working to conserve the cardinal-sized bird.

"We're still short of recovery goals and certainly have not seen threats be abated," he said.

Noah Greenwald, endangered species director at the Center for Biological Diversity, called the bird's recovery "a tremendous victory for the Endangered Species Act" and not the Trump administration.

"Secretary Bernhardt, who is a former lobbyist for the oil and gas industry and other special interests, has been an absolute disaster for endangered species," Greenwald said in a news release.

Although the Fish and Wildlife Service told landowners in April that there was a chance of entirely dropping all protection for the woodpeckers, it didn't do that. Still, it is also requesting comment on future "de-listing," according to the news release.

The bird's recovery from the brink of extinction is a great success story, but the birds still need continued protection, said Jeff Walters of Virginia Tech, co-author of a "species status report" about the woodpeckers. He said their survival if the proposal is approved will depend on rules still to be written.

The Trump administration changed Endangered Species Act rules to end automatic continued protection when a species is moved from endangered to threatened, he noted. Now a threatened species is only protected if special rules are written to describe such requirements.

"That allows us to carefully craft and carefully tailor a proposed rule that will focus our energy and resources and time we feel best to further the recovery of this one species," Bernhardt said.

He did not go into detail. The news release said the government is proposing a rule to protect current habitat, forbidding damage to trees with woodpecker holes, harassment of the birds during breeding season and the use of insecticides near clusters.

The species status assessment will be published with the proposal in the Federal Register, triggering a 60-day period for public comment, the federal news release said.

The news conference came during a monthslong push by President Donald Trump's Cabinet chiefs into states where Democrat Joe Biden is making a strong play in the presidential race. Trump won Georgia by 5.1 percentage points in 2016, but some polls suggest a closer race this time, and it's among several states where Biden is upping his campaign spending.

Once found from New Jersey to Florida, west to Texas and north to Missouri, Kentucky and Tennessee, red-cockaded woodpeckers now live only in coastal states from southern Virginia to eastern Texas, and parts of Arkansas and Oklahoma.

The federal government spent $408 million on red-cockaded woodpeckers from 1998 to 2016, making the species one of the most expensive on the endangered list.

It is the only North American woodpecker that carves living quarters inside live trees, which takes years. And because the longleaf pines it favors were logged out and replaced with faster-growing pines, the birds' range nearly disappeared as the forests shrank from 90 million acres to about 3 million. Fire suppression in remaining forests let other trees grow too close for the birds' comfort.

By the late 1970s, there were only 1,470 clusters -- breeding pairs and young males that live nearby and help their parents care for nestlings. Fish and Wildlife Service experts now estimate there are nearly 7,800 clusters.

Scientists credit the recovery largely to two programs developed after 1989's Hurricane Hugo hit South Carolina and destroyed 87% of the woodpeckers' trees in what was then their second-largest colony. One program installs prefabricated woodpecker houses flush into tall pines, or drills cavities for the birds. Another moves young woodpeckers into areas where only a few adults live.

The government also credited safe harbor agreements, in which landowners can manage their land with minimal federal oversight if they agree to help a protected animal on it.

Other programs have added more than 1.3 million acres of new longleaf pine stands in the past 10 years, the news release said. The total is now 4.7 million acres, according to the National Resource Conservation Service.

"The trees have to be 60 years old before they're good to forage on and 100 years to be good for cavities," he said. 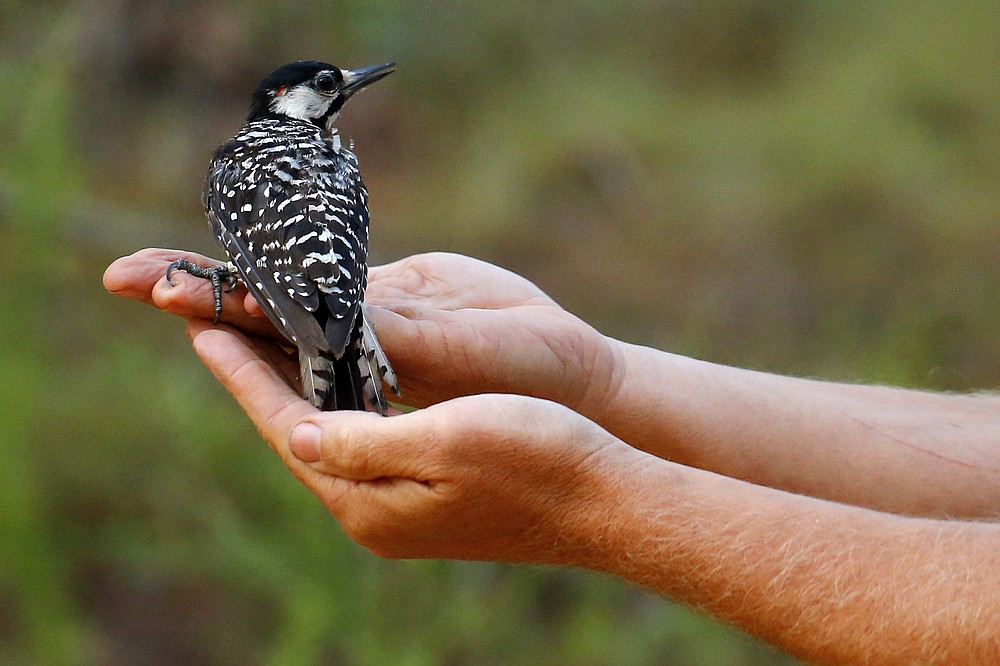 FILE - In this July 30, 2019, file photo, a red-cockaded woodpecker looks to a biologist as it is released back into in a long leaf pine forest at Fort Bragg in North Carolina. A bird declared endangered in 1970 -- the red-cockaded woodpecker, which taps pine sap to protect babies from snakes and gets its sons to help care for the next clutch of nestlings -- has recovered enough to relax federal protection, officials said Friday, Sept. 25, 2020. (AP Photo/Robert F. Bukaty, File)
ADVERTISEMENT