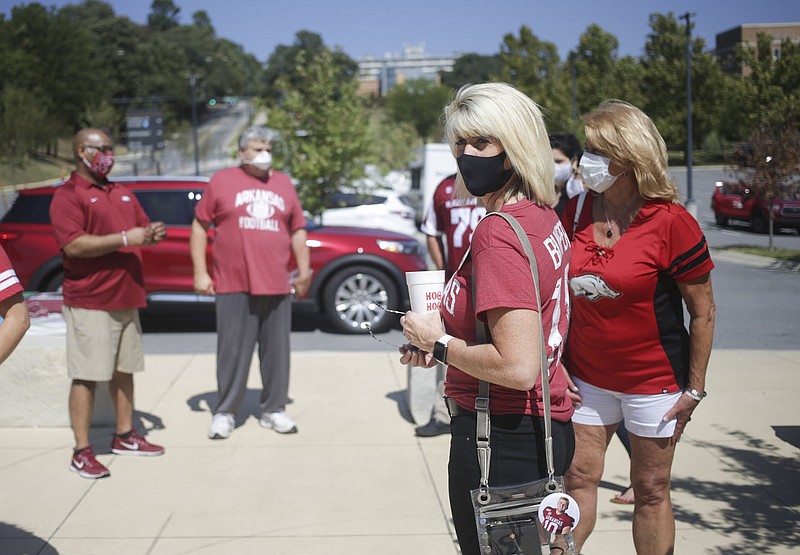 FAYETTEVILLE -- Saturday was a busy day in Northwest Arkansas. The Razorbacks played football under covid-19 restrictions, and motorcycle riders rolled in, even though the annual Bikes, Blues & BBQ rally was canceled this year because of the pandemic.

The Bikes, Blues & BBQ event normally draws thousands of people to the region each year and bills itself as the largest nonprofit motorcycle rally in the nation, having raised more than $2 million cumulatively.

This year, for the first time in its 20-year history, its organizers opted to cancel the rally, which was originally scheduled for Wednesday-Saturday last week.

That didn't stop motorcyclists from flocking to Northwest Arkansas, though.

The Arkansas Department of Health had approved a plan for the dealership to hold The Rally Off Exit 86 in lieu of Bikes, Blues & BBQ. Signs saying masks were required sat at entryways inside and out, as did hand sanitizing stations.

A few vendors selling merchandise ranging from T-shirts to leather goods to cannabidiol candies to cigars spread out under tents set up on the 11-acre property.

Few people aside from the staff and vendors wore masks outside or inside the dealership. Crowds generally stayed spread apart with a few clusters here and there.

Kyle Johnson, general manager, said the dealership made periodic announcements for attendees to wear masks. People generally were able to maintain at least 6 feet of distance on the large property, he said. Johnson estimated Friday's crowd at about 500.

The Health Department directive for the event said face coverings were required for everyone except children younger than 10. Outdoors, if attendees were seated and at least 6 feet apart, they could take off their masks.

Capacity in the dealership was 328 people, which is 66% of the allowed occupancy. Outdoor capacity was 1,275 people, representing 66% of the occupancy limit.

"If they're in a space that can guarantee proper distance, then it's OK to remove the mask," she said. "The general rule is if you can't be more than 6 feet apart, a mask is required."

Beth Cochran rode in with her husband, Tracy, from Kalamazoo, Mich. She said the two were more interested in the ride than the destination this year. The couple stayed in Eureka Springs and rode along the Pig Trail to Rogers to look at buying a 2020 Harley-Davidson.

Motorcycling is their passion, she said. "You should always have a passion you share with your partner."

Cochran said the first date with her husband, now a retired police officer, was spent on the back of his motorcycle. That was 36 years ago.

The couple rode along Arkansas 123 -- known as the Arkansas Dragon -- after getting a recommendation from someone at War Eagle Mill in Rogers. The curves and the scenery were like none she has experienced in Michigan, she said.

"He said he's never ridden so many curves in one day," Cochran said of her husband.

With approval from the Health Department, a Bikes with No Blues event -- featuring an indoor comedy show and outdoor live music -- was held Friday evening in Lowell at 15% venue capacity at the Grove Entertainment complex.

About 175 people attended the event. For the most part participants adhered to event restrictions, said Bill Adams, Grove owner.

"Everyone was wearing their masks, everybody was distant," he said. "There were a few times where we had to do some reminders, but those circles on the ground worked, and everybody stayed well away from everybody else and had a great time."

The event was such a success that Adams said he's working on plans for future outdoor events.

"We'll be reaching out to some bigger-named comics to see if they want to do some outdoor shows at the Grove, as well," he said.

The Razorbacks played their first game of the season Saturday in Fayetteville against the Georgia Bulldogs under Health Department guidelines that included people wearing masks, social distancing and no more than 17,000 fans in Donald W. Reynolds Razorback Stadium, which has a capacity of 72,000, according to the Razorbacks' website.

The normal sea of Razorback red at games was more of a sporadic stream as mostly mask-wearing fans entered the stadium, some shouting "Arkansas" and "Razorbacks." Signs surrounding the stadium encouraged fans to "stay safe to keep enjoying sports" with instructions to wear masks, wash up, spread out and have fun.

Madison Miller, 18, of Orange County, Calif., attended the game with about 10 other members of the university's Pi Beta Phi sorority. They started their fan experience by taking group photos in front of the stadium.

Miller said attending Razorback games is always exciting, and she felt that some of the covid-19 restrictions for the game might make for a more pleasant fan experience.

"Sometimes it gets a little crowded," Miller said.

Tailgating is prohibited on University of Arkansas, Fayetteville property this season in accordance with Health Department directives, according to the team website. Exclusions include traditional tailgating locations like parking lots, The Gardens on the corner of Razorback Road and Carlson Drive, and Victory Village off Maple Street.

Nancy Hall, 66, of North Little Rock said she and her husband, Jeff Hall, 69, have been season ticket holders since the early 1970s. On Saturday, the couple and two others sipped margaritas and ate assorted snacks from the open back of their SUV that was parked in their traditional space in a lot on the north side of the stadium.

Tailgating is a big part of the game day experience, Jeff Hall said, adding that he looks forward to maybe being able to do that again next year.

"We tailgate with another family that's usually right beside us here," Nancy Hall said from the sparsely populated lot. "There's usually 50 to 100 people here."

The following directives detail requirements for gatherings of more than 10 people held indoors or outdoors on public or private property:

• Limitations on Gatherings of 10 People:

• Additionally, all residents and visitors are expected to follow the state’s directive on face coverings: