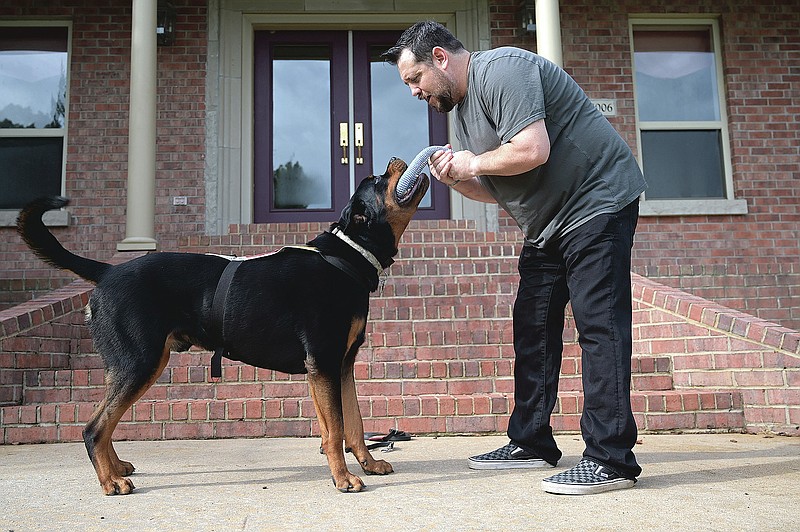 LITTLE ROCK -- Questions about whether Union Pacific Railroad must allow an engineer to bring his service dog to work to help him deal with symptoms of post-traumatic stress disorder are on hold after a federal jury trial scheduled to begin Monday was postponed.

A day after denying efforts by the railroad to delay the trial for other reasons, U.S. District Judge Kristine Baker agreed to the request Friday. Attorney John W. Griffin Jr., who is representing plaintiff Perry Hopman of Benton, said Baker agreed after she was told that an attorney and a paralegal for Union Pacific may have been exposed to the coronavirus and need to be quarantined.

Baker didn't say how soon she will reschedule the trial, but Griffin, of Victoria,Texas, said he hopes the delay in the civil-rights challenge is "very, very short," since the case has been pending since 2018.

"We are greatly disappointed that Union Pacific would not have better covid-19 procedures in place, particularly when they knew they were coming to Little Rock," Griffin said. He said Hopman, 45, "wants to have this case finished."

Hopman is an Army veteran and a former flight medic who was diagnosed with the disorder in 2008, after returning from an 18-month deployment to Iraq. Griffin says Hopman later suffered a traumatic brain injury during a 2010 deployment to Kosovo with the National Guard, which made his symptoms worse.

Hopman began working at Union Pacific's North Little Rock facility in May of 2008, after his diagnosis, but didn't need any special accommodations on the job then, according to his lawsuit. He later medically retired from the National Guard after suffering the brain injury, but continued to work at the railroad as a conductor and now as an engineer.

Nearly a year later, he cited worsening struggles with the disorder, which he says is classified as a disability under federal law, in asking that his trained Rottweiler, Atlas, accompany him to work. Hopman acknowledges he can safely perform all functions of his job without Atlas at his side, but says the dog's presence and special skills would allow him to be more comfortable physically and mentally on the job.

He presented his request as a "reasonable accommodation" for his disability, "so that he may have equal benefits and privileges of employment as are enjoyed by his co-workers without disabilities."

The railroad, which is represented by attorneys from Texas and Nebraska, denies that it failed to accommodate Hopman under the Americans with Disabilities Act and Section 504 of the Rehabilitation Act, in denying his request to bring a service dog to work. Union Pacific maintains that it wasn't obligated to provide Hopman with the specific accommodation he requested.

It offered him an alternative accommodation, in the form of working in the rail yards instead of aboard trains, but Hopman decried that option, saying such work was worse for his symptoms than working on the trains themselves.

Hopman acknowledges that when he first asked that his medically recommended service dog accompany him to work to help him stave off anxiety, panic attacks and migraines, Atlas hadn't yet completed his training. But after the 18-month service dog training was complete, Hopman asked again, and was again denied.

According to Hopman, Atlas can sense his anxiety levels and "ground" him by sitting on his feet. Atlas also reminds Hopman to take his medicine, helps keep crowds away from him, notifies him when a migraine is coming and helps him find the closest exit in a building, among other things.

Union Pacific has said it was unclear how a dog would react to dangerous conditions at the rail yard, that there is no infrastructure in place to support a dog on a train or on overnight trips that Hopman made as a conductor, and that a dog also posed a danger to other employees.

Baker said in May that a jury must decide disputed facts about the railroad's assertions that Hopman's request isn't necessary or reasonable. She said that under the ADA, a "reasonable accommodation" can include modifications or adjustments that allow an employee with a disability "to enjoy equal benefits and privileges of employment as are enjoyed" by other employees.

She said other courts have recognized that an employee who can ably perform his job without a special accommodation nonetheless may still need a reasonable accommodation "to enjoy equal benefits and privileges of employment." 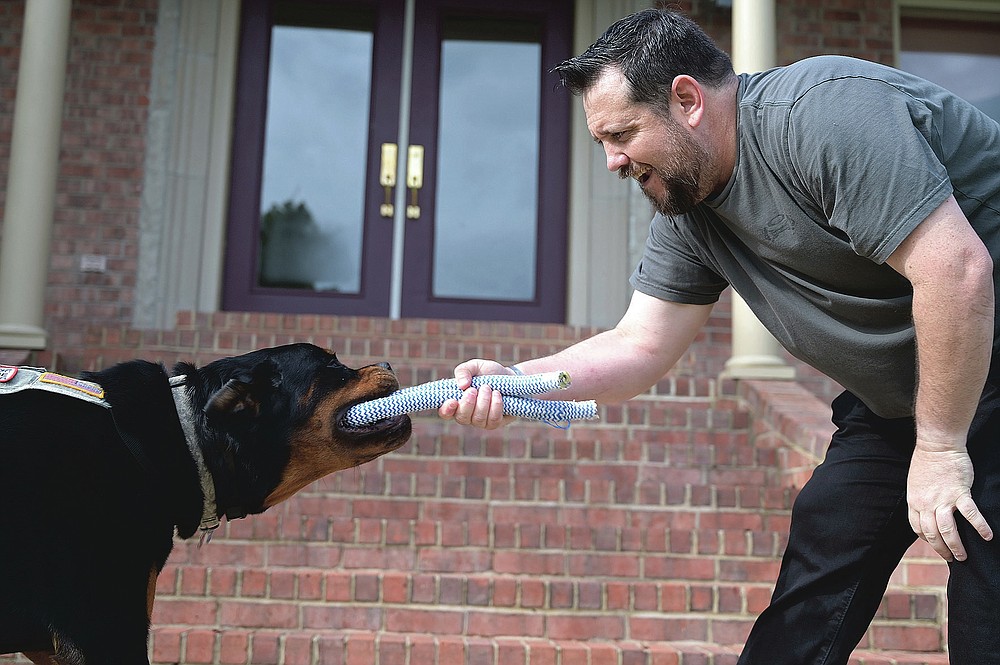 Perry Hopman plays with his service dog, Atlas, outside his home in Benton on Friday, Sept. 4, 2020. Atlas is trained to help Perry ward off panic attacks, anxiety, and flashbacks on the job as a result of his PTSD while serving as a U.S. Army flight medic. (Arkansas Democrat-Gazette / Stephen Swofford)
ADVERTISEMENT