Ride service wins appeal of decision not to renew permit by Compiled by Democrat-Gazette Staff From Wire Reports | September 29, 2020 at 2:04 a.m. 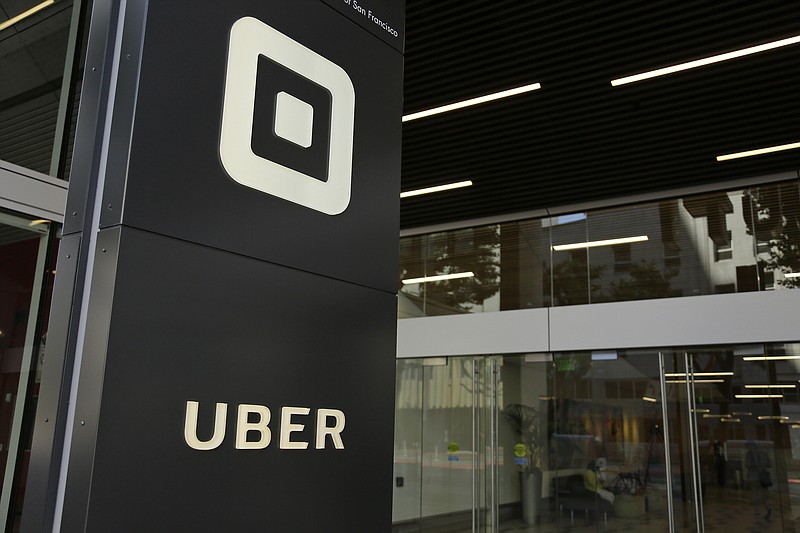 FILE - This Wednesday, June 21, 2017, file photo shows the building that houses the headquarters of Uber, in San Francisco. Uber can keep operating in London after the ride-hailing company won a court appeal on Monday Sept. 28, 2020, against the refusal by transit regulators to renew its license. (AP Photo/Eric Risberg, File)

LONDON -- Uber can keep operating in London, one of its most important global markets, for another year and a half after winning its appeal of a decision by the British capital's transit regulator not to renew its license.

The San Francisco-based ride-hailing company had challenged Transport for London's decision in late 2019 not to renew its operating license over safety concerns involving impostor drivers.

A deputy chief magistrate, Tan Ikram, said Uber had met a "fit and proper" standard to receive a license for 18 months. Ikram said Uber had taken the necessary steps to address regulators' concerns, including new safety measures to keep unauthorized and uninsured drivers from using its platform to carry passengers.

The extension comes with 21 conditions. including providing regular, independent reports to authorities.

The company said the decision is a "recognition of Uber's commitment to safety" and it will "continue to work constructively" with the regulator. In London, Uber has up to 45,000 drivers on the road and provides millions of rides each month, according to information the company submitted to the court.

The pandemic has had a crippling effect on Uber's business. In August, the company reported that revenue from its ride-hailing business had fallen 67% from a year earlier. The company posted a net loss of $1.8 billion. That has raised doubts that it can meet its goal of becoming profitable by 2021.

Uber's stock price still trades below what was sold at its initial public offering, a sign of investors' lack of confidence in the company. Uber's shares rose 3.2% in New York trading Monday.

[Video not showing up above? Click here to view » https://www.youtube.com/watch?v=fpbHDnQtO5M]

The company faces a slew of other regulatory challenges around the globe. In California, where Uber and rivals are under legal pressure to reclassify drivers as employees rather than independent contractors, the company has considered shifting to a franchise business model, or pulling out of the market altogether.

In Britain, it's also involved in a separate case at the Supreme Court over whether drivers should be considered employees with rights, in a ruling that could shake up the country's gig economy.

Uber's license in the city has been revoked twice since 2017 but the company has been able to continue operating while it appealed.

In the latest case, Transport for London rejected Uber's application in November 2019 for a new license, citing several breaches that placed passengers at risk. Most notably, the regulator found that a change Uber made to its systems allowed unauthorized drivers to upload their photos to other driver accounts and carry out at least 14,000 uninsured rides.

The magistrate said he took into account Uber's efforts to improve oversight and tighten up identity checks. He said he didn't find any evidence of a cover-up of the driver photo fraud problem.

"Uber doesn't have a perfect record but it has an improving picture," Ikram said. "I am satisfied that they are doing what a reasonable business in their sector could be expected to do, perhaps even more."

Uber's drivers normally provide millions of trips each month in London, where its services have proved popular with residents who want an alternative to the city's more expensive traditional black cabs. However, the company has faced fierce opposition to its services from cabdrivers.

"Uber has demonstrated time and again that it simply can't be trusted to put the safety of Londoners, its drivers and other road users above profit," the group's statement said. "Sadly, it seems that Uber is too big to regulate effectively, but too big to fail."

London Mayor Sadiq Khan said that while Uber has made improvements to get its license back, the company will still be closely scrutinized.

"I can assure Londoners that [Transport for London] will continue to closely monitor Uber and will not hesitate to take swift action should they fail to meet the strict standards required to protect passengers," Khan said.

Information for this article was contributed by Kelvin Chan of The Associated Press, by Adam Satariano of The New York Times and by Karla Adam of The Washington Post.