Plan for interim circuit clerk trips up over publication rule 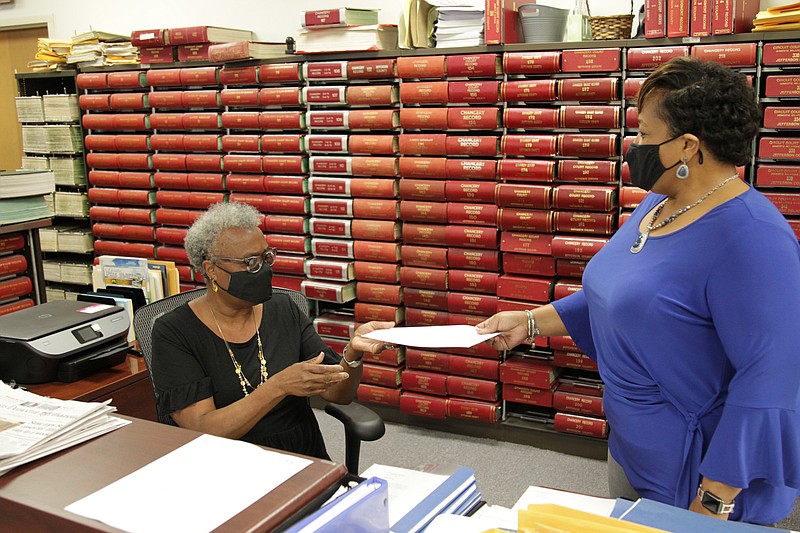 Chief Deputy Circuit Clerk Flora Cook-Bishop and Deputy Circuit Clerk Barbara Collins at work in the Circuit Clerk's office on Tuesday afternoon. Retiring Circuit Clerk Lafayette Woods Sr. has recommended Collins to succeed him as interim circuit clerk to fill out the remainder of his unexpired term, which expires Dec. 31, 2022. Because the appointed interim clerk cannot run to succeed herself, Woods did not ask the Quorum Court to consider Bishop for the position, saying she intends to run for the office in 2022. (Pine Bluff Commercial/Dale Ellis)

Jefferson County officials hit an unanticipated snag in the effort to replace retiring Circuit Clerk Lafayette Woods Sr. on Tuesday when County Attorney Terry Wynne informed the Quorum Court that a resolution accepting Woods' resignation and appointing one of his deputies, Barbara Collins, would have to be published in the newspaper 24 hours before it could legally go into effect.

In a letter dated Sept. 23, Woods informed the Quorum Court of his intention to retire Oct. 1 from the office he has held for 12 years, citing personal health and family reasons, and he recommended Collins for the appointment as an interim to fill out his term, which expires Dec. 31, 2022.

Collins has worked in the circuit clerk's office since 2010. Woods said in his letter that because Chief Deputy Circuit Clerk Flora Cook-Bishop intends to run for the office in 2022, he was not putting her up for the interim position. Cook-Bishop has been with the office since 1988 and was named chief deputy by Woods after he took office in 2008.

"Here's the problem," Wynne said. "I spoke with Lindsey [Bailey French] at the [Association of Arkansas Counties] and the question I asked her was 'do we have to publish the resolution before we declare a vacancy?' Her opinion is that we did, and her opinion was that we couldn't actually meet on this and pass it tonight."

Wynne said French had advised him, however, that the deputy circuit clerks have the legal authority to continue operating the office until the vacancy can be declared and the position filled.

"We may be premature in trying to adopt this resolution without doing the publication in the paper first," Wynne said.

County Judge Gerald Robinson said if necessary, the matter could wait until the Quorum Court meets in regular session Oct. 13, but, he asked, even if the deputies could run the office until an interim is named, could they fulfill all of the legal requirements of a circuit clerk.

"You will not have a circuit clerk so even if they can run the office, what about the stamping of the legal documents?" Robinson asked Wynne.

"She believed they have the authority to properly file everything," Wynne said.

Justice of the Peace Patricia Royal Johnson asked about accepting other nominations and applications for the position, pointing out that when former Jefferson County Clerk Helen Bradley died in office in 2007, the county was required to accept applications before naming an interim county clerk to finish her term.

"Is there a time frame in which we should allow people to inquire?" Robinson asked.

"Not by statute, but if the court is going to consider other applicants, which it can certainly, we want that to be completed several days before the next meeting," Wynne said.

Cook-Bishop said previous vacancies in the office had been filled quickly to ensure that the courts would have uninterrupted workflow from the clerk's office.

"I don't know how we're going to do any work because we're just deputies," she said. "We're sworn in under the circuit clerk."

Wynne said his understanding is that once the deputies are sworn in, the resignation of the clerk does not affect their appointment.

"They remain properly employed deputy clerks who can operate the office," he said. "The clerk's office itself needs to be filled, but it doesn't cripple the operation of the clerk's office while we're filling that vacancy."

Cook-Bishop said that bench warrants and other legal documents, to be legally filed in the clerk's office, must receive a clerk's stamp.

"We always have emergencies that have to be done as far as court work filings," she said. "What do we do about those?"

Justice of the Peace Conley Byrd asked if the position could be filled until interviews could be conducted and a permanent replacement found.

"There's not a process for an interim appointment like that," Wynne responded. "The process calls for the Quorum Court to fill it by resolution and the only hang-up is the resolution does have to be published before it can be adopted. That can be done by another emergency meeting if you want, but it requires the publication of the proposed resolution."

Wynne said there is no requirement for the Quorum Court to accept applications for the position.

"It's just required to declare a vacancy and then the court can fill it," he said. "But you have to publish notice of the resolution to do that."

Wynne recommended that the county judge arrange for publication of the notice and call a special meeting for Friday, but Cook-Bishop said the matter of the office having no legally appointed clerk could still be an issue.

"Do you think waiting 24 hours will cripple the office?" Robinson asked.

"If a warrant comes down we can't do anything with it because we don't have a clerk," Cook-Bishop said.

Because the issue of the legality of document filings in the office could not be agreed on, Robinson finally decided to try and get the notice published today and to call a special meeting for Thursday to decide the matter.

Justice of the peace also delayed discussion on an amended appropriation ordinance regarding the county work-share program that was implemented earlier this year to cut expenses because of anticipated revenue shortfalls during the pandemic. The original ordinance cut $868,039 from 14 county departments, not all of which are funded out of the County General Fund.

In the original appropriation ordinance, savings in the county sheriff's office were shown to be $538,000 but that amount included just over $258,000 from the juvenile justice education budget, which Chris Brown, office manager in the sheriff's office, said was the amount that would have been saved if the office had furloughed employees.

The problem with that, Brown said, was that the sheriff's office had resisted furloughs because doing so would have left the Juvenile Justice Center understaffed, which would have forced the closure of the center and the curtailment of the education program.

"Had we done that, the money appropriated for the juvenile justice education program, because it came from the state, would have to have been returned to the state," Brown said. "That wouldn't have saved anything out of that budget."

In addition, Brown said, salaries for the Juvenile Justice Center, the Jefferson County jail and the juvenile education program all come out of different budgets than the County General Fund.

According to Brown, out of the $538,000 listed in the ordinance from the sheriff's office to be unappropriated and returned to the County General Fund, only $155,548 came from the County General Fund. The remaining $382,512, he said, is from different line items that are funded with restricted funds and can only be reappropriated back into those restricted funds and held for the original intended purpose.

In May, Robinson proposed a plan to effect a temporary 30% reduction in staffing through furloughs, a plan that received wide opposition from elected officials. As an alternative, several county offices, including the sheriff's office, elected to implement a shared work program that reduced office staff hours from 40 hours per week per person to 32 hours per week. The sheriff's office's shared work program affected only the 42 civilian employees who work in the sheriff's office, the Juvenile Justice Center, the jail, and the juvenile education program.

The Quorum Court will consider both matters in a special meeting Thursday beginning at 5:15 p.m. Because of social distancing requirements, the meeting is being held via Zoom videoconferencing. 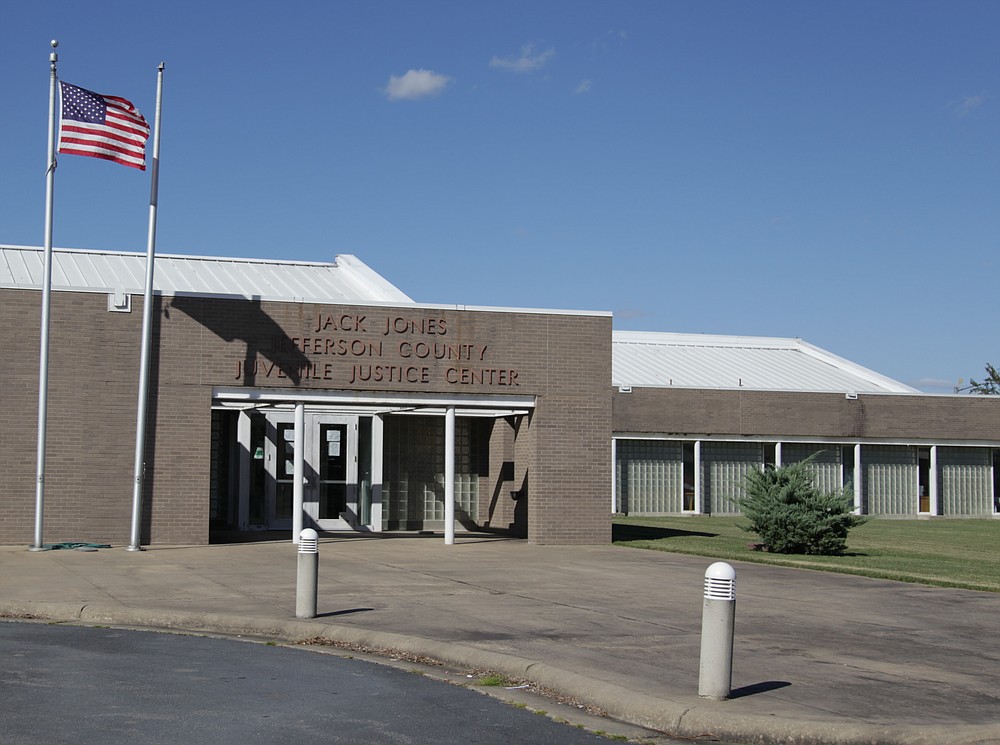 The Jack Jones Juvenile Justice Center houses minors who are provided schooling through an education budget funded by the state. Furloughs would have jeopardized those funds by forcing the closure of the center, said Chris Brown, office manager for the Sheriff's Office. (Pine Bluff Commercial/Dale Ellis)
ADVERTISEMENT