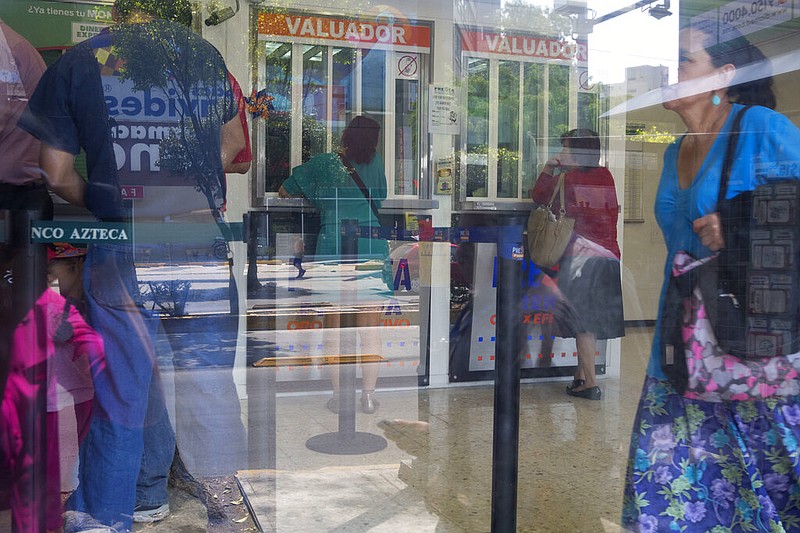 Customers are seen inside a business offering money transfers and loans in Mexico City in this April 5, 2016, file photo. (AP/Rebecca Blackwell)

An Arkansas Senate committee on Wednesday nixed a bill aiming to impose a new tax on electronic money transfers overseas and use some of the revenue for an immigration enforcement training grant program at the state Department of Public Safety.

A motion by Sen. Mark Johnson, R-Ferndale, for the Senate Revenue and Taxation Committee to recommend approval of Senate Bill 545 by Sen. Trent Garner, R-El Dorado, didn't get a second, so the bill died in the eight-member committee.

Garner told the committee, "This idea came out of the Trump administration as a way to make Mexico pay for the border wall to increase security and to make sure that you and I's space in Arkansas is safe."

The tax would be $5 per transfer for individuals who electronically transfer up to $500 outside the country, and an additional 1% tax on the amount that exceeds $500, he said. Oklahoma has adopted a similar measure, he said.

The bill wouldn't apply to transfers of money by an entity whose deposits are insured by the Federal Deposit Insurance Corp. or the National Credit Union Administration, according to the state Department of Finance and Administration.

The revenue would be split between a new grant fund for law enforcement agencies that develop comprehensive plans to enforce immigration laws; the Arkansas Law Enforcement Training Academy to provide training to identify illegal drug cartels; and the Arkansas State Police, he said.

Mireya Reith, executive director of the Arkansas United group, called the bill "a solution that is shopping for a problem that does not exist in Arkansas."

"Where we are an immigrant advocacy group and immigrants would indeed be affected by this tax, we are not the only ones," she said. "Military personnel also use money orders and remittances, especially when they are abroad, to send money to their families and their families to send to the members of the military serving abroad, and they are gravely concerned about the financial impact to them and their community."

Businesses that use money orders and wire transfers include grocers, gas stations, mom-and-pop retailers, Reith said, and they would each have to establish a point of sale to distinguish between transactions that are going abroad and those that are remaining in the country. The Arkansas Grocers and Retail Merchants Association and other trade groups oppose the bill, she said.

Fayetteville City Council member Sonia Gutierrez told the Senate tax committee that the bill is racist and punishes hard-working people who contribute to the state's economy.

Garner said, "The only thing I would push strongly back would calling this racist.

"We talk about the realities of illegal immigration and what it does to our economy in many different ways," he said.

"We talk about the drug cartels and what they do. That isn't based on the skin color or race or anything else. That is based on the hard fact and reality of what we face in Arkansas."