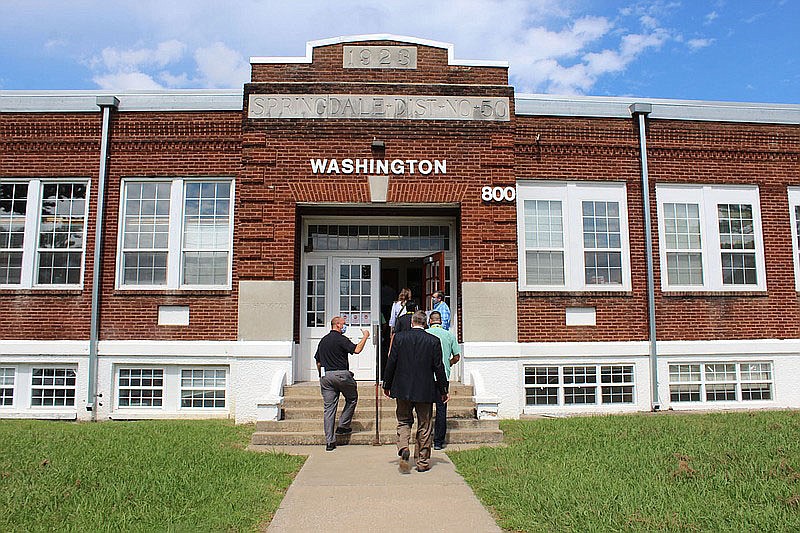 Springdale School District board and staff members enter the district Washington building at 800 E. Emma Ave. in September during a work session to evaluate how the district is using its buildings and properties. (File Photo/NWA Democrat-Gazette/Mary Jordan)

SPRINGDALE -- The School District soon will part with a building it has used for nearly a century, but first the district is celebrating its heritage in a documentary.

The 13-minute video on the Washington Building at 800 E. Emma Ave. will premiere at 7 p.m. today on the district's Facebook and YouTube pages.

Trent Jones, district director of communications, said the building opened as Washington Elementary School in 1923 and remained a school until 1982. It then became a home for some of the district's support services, including the English as a second language department.

The documentary explores the building's past through interviews with people who work or used to work there, as well as three brothers who were students at Washington Elementary.

The district is in the process of selling the building. The School Board in February accepted a bid of $635,000 for the 1.3-acre property from Omar Kasim of Kasim Ventures.

Kasim, said Wednesday he expects to close on the property within the next month or so. He said he has no definite plans for it at this time.

"We've been meeting with some leaders in downtown Springdale to see how our building can fit into their vision for revitalizing Emma Avenue," he said.

Kasim is an entrepreneur who lives in Springdale.

The Springdale Public Schools Education Foundation office is in the building. Chris Stecklein, foundation director, said he has worked there since he launched the foundation 11 years ago.

Different district departments have come and gone during that time, he said. About 15 people work in the building now, but there used to be dozens more. Most of the occupants are in the food service department, he said.

"It's just got character," he said. "It's a cool old building. It's not without old building issues, but it's not like walking into a sterile, new construction building with no character. It's cool when the floor squeaks when you walk across it."

Each person walks in a certain way, and Stecklein said he can identify who's walking down the hall by listening to the floor's squeaks.

The district is selling the building because it is "out of date" and doesn't meet the district's needs anymore, Jones said.

Jones and two employees of the communication department -- Michael Day and Dustin Mapes -- spent about two months producing the documentary that Jones narrates.

The property is one of several pieces of land the board agreed to sell earlier this year, including some that were donated to the district.

The Springdale School District purchased the Washington Building property for $3,000 in 1922, according to district administrators.