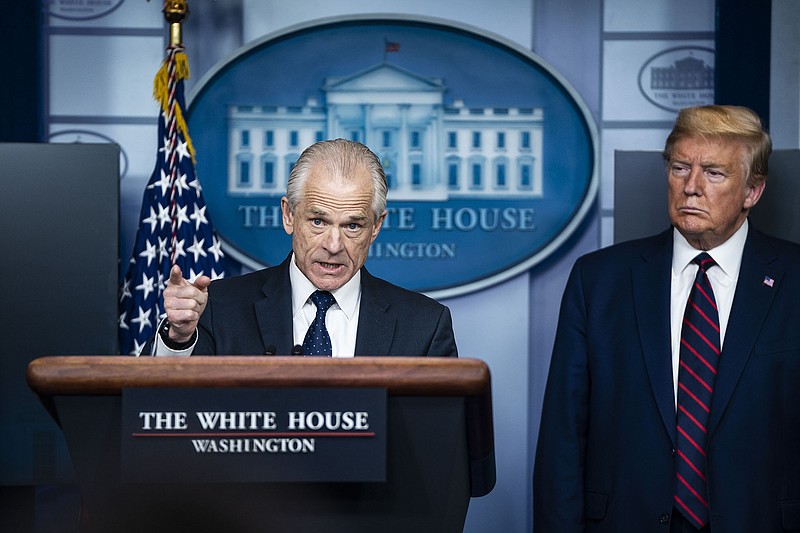 A top adviser privately urged then-President Donald Trump to acquire critical medical supplies in the early days of the coronavirus outbreak -- and after the warning was ignored, pursued his own strategy that committed more than $1 billion in federal funds and has since prompted multiple inquiries, according to newly released documents from congressional investigators.

Peter Navarro, who served as Trump's trade adviser, warned Trump on March 1, 2020, to "move in 'trump time'" to invest in ingredients for drugs, coronavirus tests and other supplies to fight the virus, according to a memo obtained by the House's select subcommittee on the coronavirus outbreak. Navarro also said that he'd been trying to acquire more protective gear such as masks, critiquing the administration's pace.

"There is no downside risk to taking swift actions as an insurance policy against what may be a very serious public health emergency. If the covid-19 crisis quickly recedes, the only thing we will have been guilty of is prudence," Navarro wrote to the president. At the time, there were about 100 confirmed cases of the coronavirus in the United States and just two deaths linked to the outbreak.

But after Trump ignored Navarro's recommendations, the trade adviser embarked on his own strategy to acquire supplies with little oversight, Democrats said. Navarro subsequently steered a $765 million loan to Eastman Kodak to produce ingredients for generic drugs, a $354 million sole-source contract for pharmaceutical ingredients to a startup called Phlow, and a $96 million sole-source contract for powered respirators and filters from AirBoss Defense Group.

The administration's loan to Kodak, which had never previously manufactured drugs and is best known for its former photography business, was paused last year amid investigations by multiple congressional committees. House investigators also learned that Kodak executives had warned federal officials in March 2020 that the company would need a waiver from the Food and Drug Administration's current good manufacturing practices -- federal standards intended to ensure that firms have the necessary equipment, facilities and other components needed to produce safe and effective drugs.

Meanwhile, leaders of Phlow -- a company that had never previously manufactured drugs and was only incorporated in January 2020 -- strategized with Navarro's office on its proposal to produce pharmaceutical ingredients in Virginia. The Biomedical Advanced Research and Development Agency subsequently awarded a $354 million contract to the firm with an additional $458 million in contract options, amid pressure from Navarro, who urged officials to "please move this puppy in Trump time."

House investigators also obtained documents in which retired Gen. Jack Keane, a Trump ally who was a paid AirBoss consultant, touted the company to Navarro on March 22, 2020, and helped arrange an immediate conversation between its leaders and White House officials. The company the next day submitted a $96.4 million proposal, and Navarro assured AirBoss leaders to "consider it done." Navarro's team subsequently pressured the Federal Emergency Management Agency to finalize an updated version of the contract within a week.

Rep. James Clyburn, D-S.C., the subcommittee chairman, on Wednesday urged Health and Human Services Secretary Xavier Becerra, Homeland Security Secretary Alejandro Mayorkas and other senior officials to release further information about Navarro's arrangements. Clyburn said his previous requests had been stalled by the Trump administration last year, and he raised questions about other contracts that he said Navarro may have been involved in.

"These documents provide further evidence that the Trump administration failed to react quickly to the coronavirus pandemic in spring 2020 despite urgent warnings, failed to implement a national strategy to alleviate critical supply shortages that were putting American lives at risk, and pursued a haphazard and ineffective approach to procurement in which senior White House officials steered contracts to particular companies without adequate diligence or competition," Clyburn and fellow Democrats wrote in letters shared with The Washington Post.

The Department of Health and Human Services did not immediately respond to a request for comment.