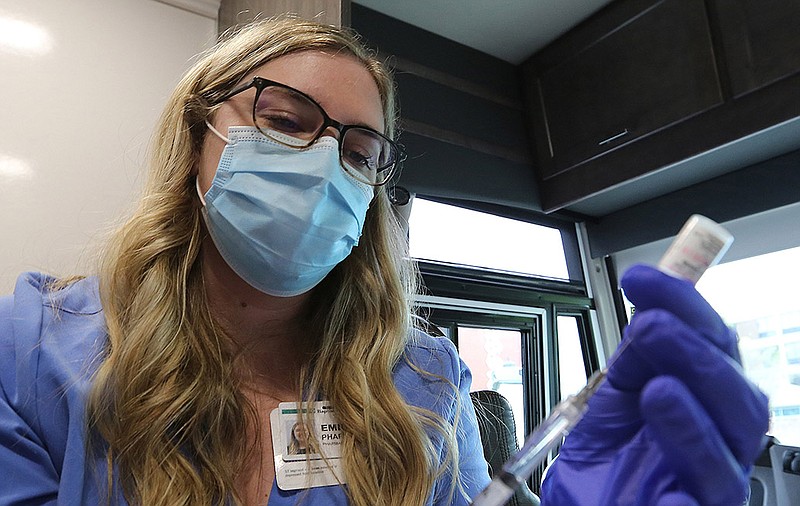 Pharmacist Emily Sprick fills syringes with the Pfizer covid-19 vaccine Wednesday during a vaccination clinic at the River Cities Travel Center in downtown Little Rock. The state has opened vaccine eligibility to all Arkansans age 16 and older, but some clinics are not seeing the huge surge of patients they had expected. (Arkansas Democrat-Gazette/Thomas Metthe)

A day after Gov. Asa Hutchinson lifted the statewide mask mandate, the state Senate passed a bill that would nullify "all mandatory face covering requirements."

But Sen. Clarke Tucker, D-Little Rock, said he believes that the bill's language would do that.

In a statement Wednesday night, Hutchinson appeared to agree on Senate Bill 590's scope, saying the legislation is "pointless except it would prohibit private businesses, schools and hospitals from requirements for face coverings."

"This is not a good idea, and I would veto the bill in its current form," the Republican governor said.

Also Wednesday, Arkansas' count of coronavirus cases rose by 212 -- the second daily increase in a row that was smaller than the one a week earlier.

After rising Tuesday, the number of people hospitalized in the state with covid-19 fell by four, to 166.

The state death toll from the virus, as tracked by the Department of Health, rose by 10, to 5,626.

In lifting the statewide mask mandate Tuesday, Hutchinson noted that the number of covid-19 patients in state hospitals had fallen "way below" 750 -- one of the benchmarks he had set for deciding whether the requirement should continue past March.

SB590 would end any face covering requirements, "including without limitation" the one Hutchinson already lifted and any contained in directives issued by the Health Department in response to the pandemic.

Garner said this bill "stops the executive branch from unilaterally issuing an executive order to deal with one particular subset of issues, and it just relates to covid-19."

"I don't think we should go back to a mask mandate as contentious as that was," he said.

Garner said he believes the bill would require the Legislature to determine whether there needs to be any mask mandate in the future.

The Senate passed the bill in a 20-9 vote, sending it to the House for further action.

It also voted 27-7 to approve an emergency clause that would make the bill take effect immediately upon being signed by the governor or becoming law without his signature.

In response to the removal of the statewide mandate, an association representing the state's federally funded community health centers said in a news release Wednesday that the centers would continue requiring masks to be worn at the more than 140 clinics around the state.

"We strongly believe we should absolutely persist in the fight against COVID-19," Community Health Centers of Arkansas CEO LaShannon Spencer said in the release.

"Unfortunately, we've seen throughout the history of this pandemic that backing off protective measures leads to case spikes."

Meanwhile, several health care providers reported only a modest increase in the number of people seeking coronavirus vaccines even after Hutchinson on Tuesday extended eligibility for the shots to all residents 16 and older.

Previously, eligibility had been restricted to people 65 and older, people with health conditions putting them at increased risk of severe covid-19, residents and workers at long-term-care facilities, health care workers, people in certain essential jobs and other high-priority groups.

The University of Arkansas for Medical Sciences' vaccination clinic in Little Rock was "not seeing a huge surge with the governor's announcement, and in fact we have appointment availability tomorrow," university spokeswoman Leslie Taylor said Wednesday.

"It wasn't what we were expecting," she said.

"I don't know if it's because of vaccine hesitancy or what, or maybe people just haven't reacted yet."

She said the clinic has been taking some walk-in patients. The university also has been holding vaccination clinics in different parts of the state about twice a week, she said.

"We're just hopeful that with our mobile program and trying to reach out and get the shots into arms where people live, maybe that will help some," she said.

Even in Northwest Arkansas, where demand for the available vaccine doses has generally been stronger, more than 1,100 of the 2,500 appointment slots for a clinic today at the University of Arkansas' Donald W. Reynolds Razorback Stadium remained unfilled as of Wednesday evening.

A clinic planned for Friday at J.B. Hunt's headquarters in Lowell had 975 available appointments, with 1,525 others that had been taken.

Both clinics were announced Tuesday by the Northwest Arkansas Council, a business group.

"We were hoping it was going to fill up quickly," council spokesman Nate Green said. "It was a little slower than we thought."

The clinics are the first of a series that the council plans to hold on Thursdays and Fridays for at least 10 weeks.

Green said the council started advertising the clinics on social media and through news releases Tuesday.

It's also planning to spread the word through billboards, radio and television commercials, and online ads.

"We're working on them now," Green said. "I'm hoping they're going to be up in time for next week's events so that we can increase the uptake on getting people registered."

If the available appointments for this week don't fill up, he said the clinics will take walk-in patients.

At Smith Drug and Compounding in Hot Springs, pharmacist Jessica Thornton said she'd seen an increase in people making appointments compared with last week, when owner Lance Smith said about half of the available appointment slots were going unfilled.

The pharmacy still had several appointment slots available on its website, smithdrugandcompounding.com, for as early as today, however.

"It looks better than last week, but we still have the capability to take on more appointments," Thornton said.

"It's still not filled to our maximal that we can handle."

She said the pharmacy had added some appointment slots on Saturday "to just see if maybe some people just couldn't get here during the week, see if that works for their schedule."

Lelan Stice, owner of Doctor's Orders pharmacies in Pine Bluff, White Hall and Star City, said 353 of the 400 available appointments to receive the initial shot of the vaccine developed by Pfizer and BioNTech at a clinic Friday had been filled as of Wednesday afternoon.

That was an improvement from other recent clinics, when he said only 70% to 75% of the available appointments were taken.

"It seems like we've still got some vaccine hesitancy in the public, especially as we've gotten into these younger age groups. They certainly were not as eager to get a vaccination as the elderly population was."

After his own bout of covid-19 in December, pastor William Holloway, chief executive of The Compassion Center in Little Rock, said he knows the importance of getting vaccinated.

The Health Department will have 100 doses of the single-shot Johnson & Johnson vaccine available at a clinic at the shelter from 8 a.m. until noon today.

He said he's not sure why some people aren't interested.

"I actually think a lot of people don't trust our government right now, that's my personal opinion," he said.

State Epidemiologist Jennifer Dillaha said officials "didn't really anticipate an overwhelming response" to the lifting of the eligibility criteria for the vaccines.

"We'd already extended it to people with chronic health conditions, and that is the majority of people who are 16 through 65," she said.

"There's so many people in that category, that to add to the rest of them was small in comparison to that group."

Asked about the pace of the state's vaccinations, she said, "I think it's OK."

She said she'd like to get the vaccine to more medical clinics, which she said can identify patients at risk of severe covid-19 and alleviate their concerns about the vaccine.

"That's a slower process than a drive-thru" vaccination event, she said.

According to the Health Department, providers participating in the vaccination effort coordinated by the state had received 1,755,140 doses of vaccine as of Wednesday morning, up 18,980 from the total as of a day earlier.

The doses those providers reported having administered, including second shots of the Pfizer and Moderna vaccines' two-dose regimens, rose by 20,080, to 1,010,188.

In addition, Walmart, Walgreens, CVS and network pharmacies had been allotted 280,130 doses through federal programs, up 11,700 from the total as of a day earlier.

According to the U.S. Centers for Disease Control and Prevention, the number of Arkansans who had received at least one vaccine dose rose Wednesday by 15,820, to 788,277, representing about 26.1% of the state's population.

Nationally, 29.4% of people had received at least one vaccine dose, and 16.4% had been fully vaccinated.

After falling Tuesday, the number of the state's virus patients who were on ventilators rose Wednesday by two, to 27.

The number of covid-19 patients who were in intensive care as of 2 p.m. remained unchanged, at 63.

Dillaha said three of the deaths reported Wednesday happened in mid-February, and the rest occurred within the past month.

As a result, the average number of cases added to the state's tallies over a rolling seven-day period fell by about three, to 174.

With recoveries outpacing new cases, the number of cases that were considered active fell by 22, to 1,695, falling below 1,700 for the first time since May 29.

The cases that were added to the state's tallies Wednesday included 134 that were confirmed through polymerase chain reaction, or PCR, tests.

The other 78 were "probable" cases, which include those identified through less-sensitive antigen tests.

Among nursing home and assisted living facility residents, the state count of virus deaths rose by one, to 2,064.

The number of state patients who have ever been on a ventilator with covid-19 rose by four, to 1,584. 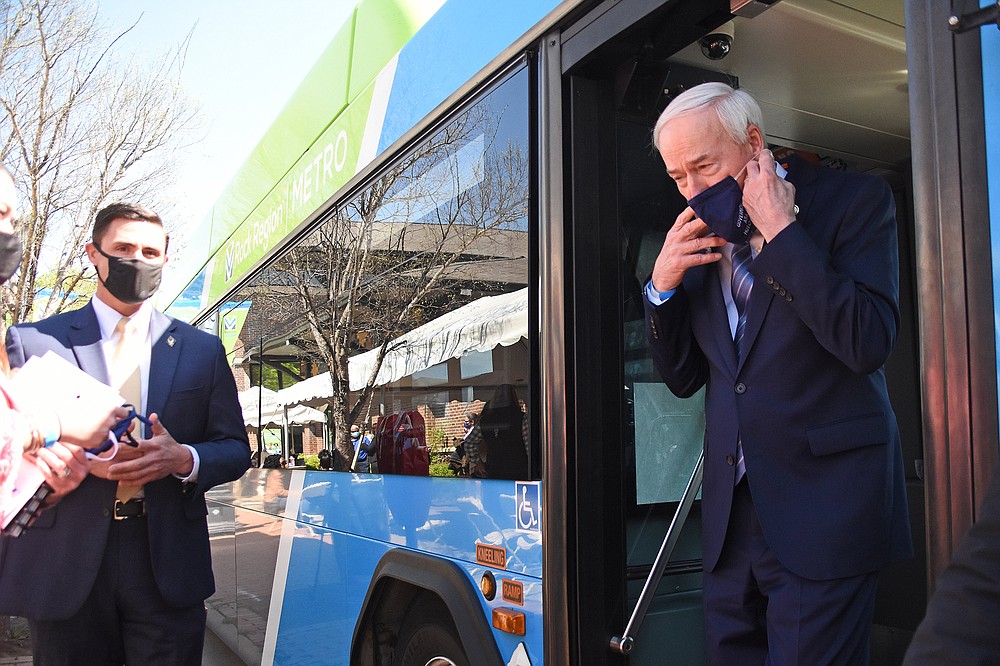 Gov. Asa Hutchinson adjusts his mask Wednesday as he visits a River Cities Travel Center vaccination clinic in downtown Little Rock. A bill passed by the state Senate on Wednesday seeks to block “all mandatory face covering requirements.” Hutchinson and others oppose the measure. “This is not a good idea, and I would veto the bill in its current form,” Hutchinson said. (Arkansas Democrat-Gazette/Staci Vandagriff)
ADVERTISEMENT