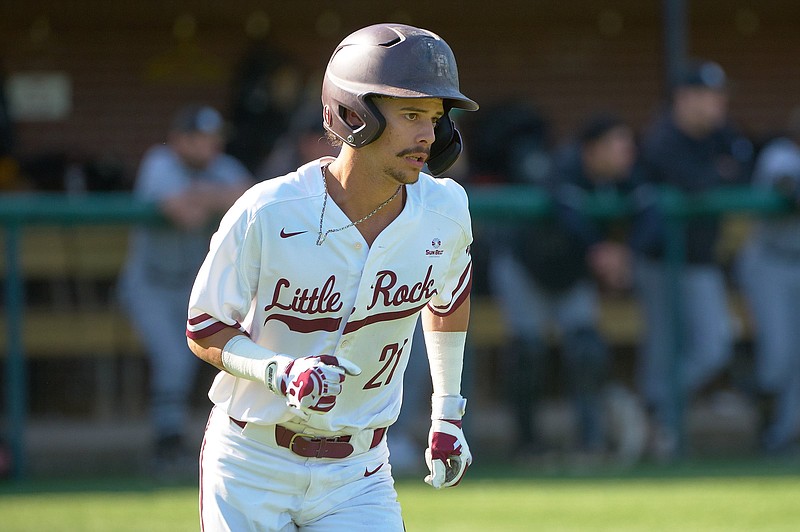 The 7-2 victory marked UALR's seventh in eight games and capped a 10-4 month for the Trojans, sending Coach Chris Curry's squad into a three-game set at Arkansas State University beginning today with earned confidence.

"It's good to stay on the winning side coming off of two big wins at Southern Illinois," Curry said. "This game was sandwiched between two big weekends. The guys were aware of that. They're aware of the stretch run we're about to be on, and they came in and took care of business."

UALR (12-8) responded to UAPB senior Nick Kreutzer's first-inning RBI with four runs in the bottom of the frame and never relinquished the lead to UAPB (2-14) in the Trojans' 11th consecutive victory over an in-state opponent dating back to 2018.

Senior outfielder Kenny Rodriguez's two-RBI single in the fourth inning helped open a 7-1 lead that was protected by a UALR bullpen that allowed 1 earned run and 2 walks over 8 innings. Senior reliever Dillon Delgadillo retired all seven batters he faced for his first win of the season.

Senior infielder Jorden Hussein upped his Sun Belt leading batting average to .431 with a pair of hits, and junior catcher Anthony Socci went 2 of 3 at the plate in his first start of 2021.

"I want to see this team continue to grow and to form some consistency," Golden Lions Coach Carlos James said. "I want to see us start to play some clean baseball, and hopefully as the season goes on we can find a groove."

UALR freshman Chance Vaught got into trouble in his first career start, and Kreutzer singled in junior Jarficur Parker to hand UAPB a 1-0 lead.

Rodriguez singled up the middle in the fourth inning to drive in sophomore designated hitter Noah Dickerson and junior outfielder Miguel Soto, and Barnum scored two batters later on a fielder's choice that put UALR ahead 7-1.

The outburst marked the Trojans' 18th inning with three or more runs this season. UALR has scored 36 runs over its past four games, and heads to Jonesboro with a .293 team batting average that ranks No. 3 in the Sun Belt.

"We have an offense that gives us a lot of confidence as we get deeper into conference play," Rodriguez said. "One through nine, we have a really good lineup."

"A lot of guys threw tonight who haven't thrown in a while and they can go this weekend," Curry said. "And then the guys who threw a lot last weekend, we were able to rest them. That's important."

SHORT HOPS UALR's 7-2 victory at home against UAPB on Wednesday marked the Trojans' seventh win in eight games. ... ASU returns for only its sixth home game of the season. The Red Wolves hold a 3-2 record at Tomlinson Stadium. ... UALR earned its first series win over a ranked opponent since 2019 when it won a pair at No. 22 Southern Illinois last week. The Trojans outscored the Salukis 29-20 over the three-game set. ... ASU's pitching ranks last in the Sun Belt in several categories, including ERA (9.51), earned runs allowed (163) and walks allowed (131). ...UALR senior Jorden Hussein enters the series leading the Sun Belt with a .431 batting average.

SHORT HOPS The Bears have lost three of their past four games after a series defeat at Incarnate Word last weekend followed by a 21-8 loss to No. 2 Arkansas on Tuesday. ... The Bearkats arrive with a two-game win streak after a series win vs. Texas A&M Corpus Christi last weekend. ... Sam Houston State is winless in true road games this season. ... UCA's 158 runs allowed rank second in the Southland Conference. ... The Bearkats' 16 home runs are third most in the league. ... Bears senior Beau Orlando leads the conference with 21 walks. ... Sam Houston State junior Tyler Davis' four walks allowed in 2021 are the fewest among qualifying Southland pitchers.