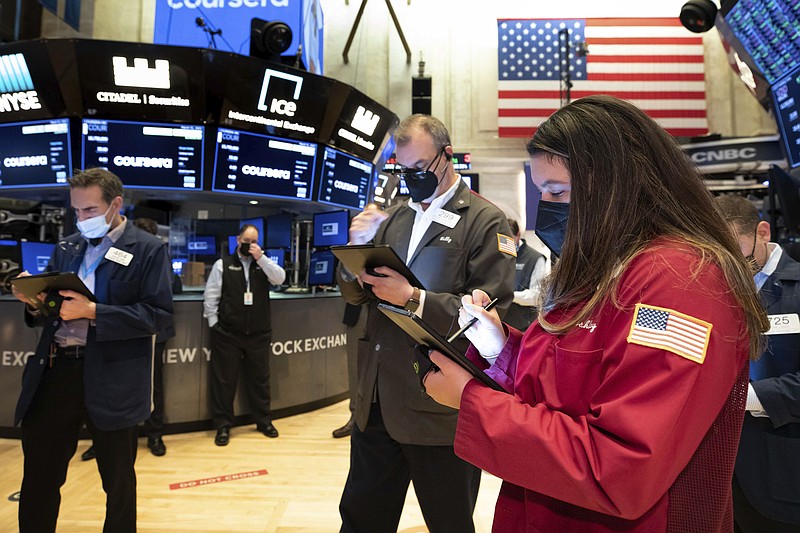 Wall Street closed out March with a mostly higher finish for U.S. stock indexes and the market's fourth-straight quarterly gain.

Most stocks in the Arkansas Index posted quarterly gains. The index, tracking 14 of the largest public companies in the state, has risen almost 24% this year.

The S&P 500 rose 0.4% Wednesday, bringing its gain for the first three months of the year to 5.8%, despite a loss for January. The gain for the benchmark index, which tracks large U.S. companies, was eclipsed by the 12.4% jump in a popular index that tracks small-company stocks.

Technology stocks powered much of S&P 500's latest gains, even though more stocks in the index fell than rose. Solid gains by Apple, Microsoft and Nvidia, and companies that rely on consumer spending, outweighed a retreat in financial, energy and materials stocks.

Stocks of smaller companies once again posted a strong showing. The stocks have outpaced the broader market on rising expectations for the economy. The Russell 2000 index rose 24.72 points, or 1.1%, to 2,220.52. It ended the quarter with a 12.4% gain, more than double that of the big stocks in the S&P 500.

Tech stocks and companies expected to deliver big growth in the future were big winners. Apple climbed 1.9%, and Tesla rose 5.1%. It's a reprieve for the group, which led the market earlier in the pandemic but has since lost momentum as Treasury yields rise sharply.

The 10-year Treasury yield inched up to 1.74%, though it remains close to its highest level since before the pandemic rocked markets a year ago. Coronavirus vaccinations and spending plans by Washington have raised expectations for supercharged economic growth and a possible rise in inflation, which has pushed yields higher.

In a speech in Pittsburgh, President Joe Biden gave details about where he wants to steer federal dollars to rebuild roads, bridges and the electric grid. Such programs could mean gushers of revenue for everything from raw-material producers to electric-vehicle makers.

The only state companies posting share price declines in the first quarter were Uniti Group and Walmart. Uniti shares closed Wednesday at $11.03, down 6% for the year. Walmart shares ended the day at $135.83, down 5.8% in 2021.

"The question for the market is, what's next?" said Haworth.

Within the S&P 500 index, the leader board of performance during the first quarter ended up being virtually the mirror image of earlier in the pandemic, with energy producers, financial businesses and industrial companies leading the way.

The index's 11 sectors notched gains in the first quarter, with energy topping the list with a nearly 30% gain. A year ago, it was down 37.3%. Technology, which a year ago led the market with a 42.2% gain, rose just 1.7% in the first three months of this year. Banks closed out the quarter with a 15.4% gain. The consumer staples sector lagged the rest of the market with a 0.5% gain.

Energy producers, banks and industrial companies have shot higher, along with smaller stocks, on expectations that a return to normalcy for the economy and Washington's huge spending will mean big jumps in profit later this year. It's a turnaround from earlier in the pandemic, when they plunged on uncertainty about when airplanes may be full again and burning jet fuel.

Stocks of companies that had been winners in the stay-at-home economy or that had been bid up on expectations for strong growth many years into the future, meanwhile, have lagged. Apple declined 7.9% in the first quarter, for example, while American Airlines Group climbed 51.6% higher.

App-based meal delivery service Deliveroo slumped 26.3% in its U.K. stock market debut. The weak showing occurred even after the stock was priced at the bottom of its potential range, reflecting investor wariness about whether Deliveroo could turn a profit as well as a growing backlash against "gig economy" companies and concerns over how they treat their workers.

Information for this article was contributed by Stan Choe, Damian J. Troise, Alex Veiga and Yuri Kageyama of The Associated Press and by the Arkansas Democrat-Gazette.