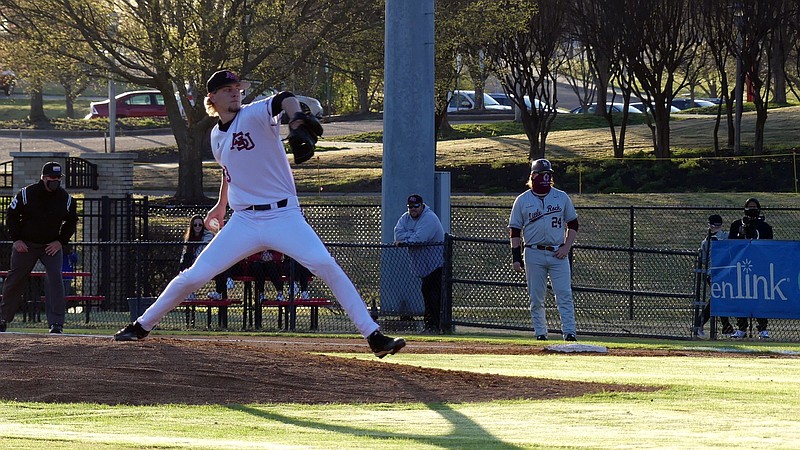 JONESBORO -- A dominant pitching performance led by sophomore Brandon Hudson propelled Arkansas State University to a 10-2 series-opening victory over the University of Arkansas at Little Rock on Thursday night at Tomlinson Stadium.

Hudson (2-0) allowed 2 runs over 6 innings and retired 15 of the final 16 batters. The 6-4 right-hander surrendered two walks and struck out three before handing the ball over to senior Jack Jumper, who pitched three scoreless innings to close out UALR.

"It's good to get that first Sun Belt win," ASU Coach Tommy Raffo said. "It's good to play at home. It's a big deal for our kids. We've been on the road for a month and for them to be in front of our fans is a big deal. It was fun to see our guys play well."

The Red Wolves (6-14, 1-3 Sun Belt Conference) held the conference's third-ranked offense to five hits and scored six runs off three UALR relievers in the seventh inning in their highest-scoring performance since March 14. Trojans senior Aaron Funk (0-3) struck out 7 but gave up 3 earned runs in 4 innings as Sun Belt West Division leading UALR (12-9, 3-1) suffered only its second defeat in nine games.

"I think tonight is a game that we have to flush [away]," UALR Coach Chris Curry. "We got beat in all three phases: On the mound, defensively and at the plate. Give them credit. It happens in baseball sometimes where you just get beat."

Hudson gave up a first-inning home run to sophomore center fielder Tyler Williams and another to Rodriguez in the second inning, but found a groove, allowing one base runner over his final four innings. His six-inning outing marked ASU's first quality start of the season.

Duncan scored Tipton with a sacrifice fly in the first inning, and Tipton scored again along with junior catcher Liam Hicks on Duncan's double to deep center field in the third, putting ASU ahead 3-2. Weatherly, a freshman from Jonesboro, replaced Funk in the fifth inning and allowed back-to-back singles by Tipton and Hicks. The Red Wolves led 4-2 after a sacrifice fly by junior Ben Klutts.

Tipton scored on Weatherly's wild pitch with one out in the seventh inning and the floodgates opened for ASU. Junior left fielder Jaylon Deshazier's base hit drove in Hicks, who reached on an intentional walk. Junior shortstop Blake McCutchen drove in two more with a single to center field following an error by Beardsley that brought in Klutts, who had walked.

Jumper retired nine of the 10 batters he faced and struck out the side in the ninth inning.