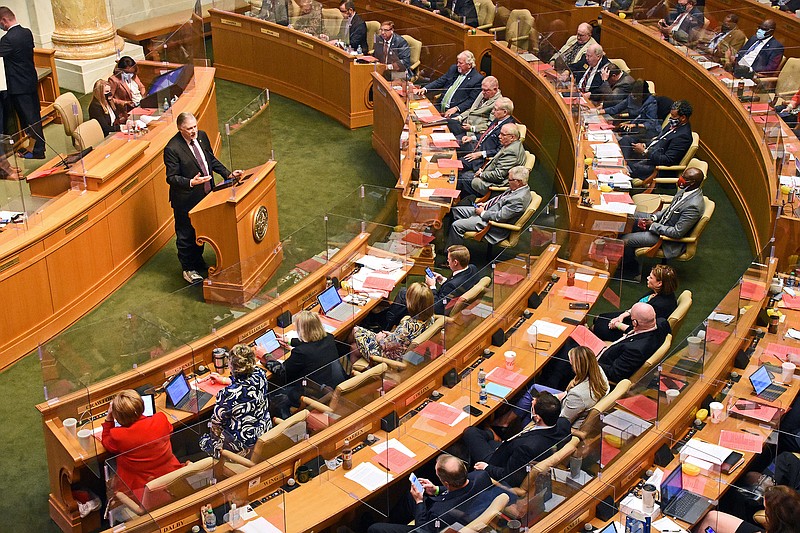 Two bills that would tighten restrictions around absentee ballots and increase the power of the state Board of Election Commissioners to investigate complaints won the approval of the Arkansas House on Thursday, over the objection of a lawmaker who equated them with Jim Crow laws.

Meanwhile, the Arkansas Senate approved a bill that would prevent people from lingering near polling places.

Proponents of the bills said they aim to increase election integrity and address problems that they say occurred in the state during the 2020 election.

House Bill 1715 by Rep. Mark Lowery, R-Maumelle, would ban the distribution of unsolicited absentee ballot applications to voters by designated election officials and would make the possession of more than four absentee ballots by one person a rebuttable presumption of intent to defraud.

The legislation would also require that signatures on absentee ballots be compared with signatures on voters' original registration certificates.

The chamber sent HB1715 to the state Senate on a 74-22 vote that was largely along party lines.

Lowery said the measure would create a uniform standard for verifying signatures.

Rep. Brandt Smith, R-Jonesboro, made a motion for immediate consideration of the bill after several minutes of questions from lawmakers. The motion passed, and Rep. Joshua Bryant, R-Rogers, later told the House that he voted against the bill because he thought there should have been more discussion.

When testifying for the bill in committee Wednesday and in the House on Thursday, Lowery mentioned a nonprofit group's assistance in "curing" ballots in Pulaski County -- reaching out to voters whose ballots had missing photo ID copies or signatures in order to fix them so they could be counted -- for the 2020 election. Lowery was joined in presenting the bill to the House Committee on State Agencies and Governmental Affairs by Deputy Attorney General Doug House on Wednesday.

Hollingsworth said in a written statement Thursday that no absentee ballot returned by voters to the courthouse was opened by the clerk's office, contrary to the testimony Wednesday, and that all requests for absentee ballots passed verification before absentee ballots were sent to the voters who requested them.

"I cannot sit by quietly and allow our office to be attacked and damaged by blatant lies. My staff worked tirelessly to ensure that thousands of Pulaski County voters safely and securely returned their absentee ballots to the courthouse even during a pandemic. I understand the need for our legislators to ensure integrity in our election process, but you can't seek integrity without speaking with honesty and truth," Hollingsworth said.

House Bill 1803, also sponsored by Lowery, would give the state Board of Election Commissioners the authority to institute corrective actions in response to complaints and would expand the types of violations about which county election boards can make complaints.

Lowery noted that it would give the state board enforcement power for a subpoena and would allow commissioners to call in the Arkansas State Police to conduct investigations.

"This just really puts more teeth in our ability to make sure that the elections are done in a fair and transparent way," Lowery said.

Rep. Fred Love, D-Little Rock, spoke against HB1803, arguing that the bills use the "Jim Crow handbook" to prevent people from voting.

"The last time sweeping changes like this were made was sometime around the 1890s," Love said. "I will tell you this, history will judge this time in the Legislature, and it will show that these laws, all they do is disenfranchise people."

"Folks, we're not in the 1800s anymore," he said. "There has been fraud, there has been mistakes, there are problems with our election system."

Three instances of voter fraud have been documented in Arkansas since 2002, according to a database from the conservative Heritage Foundation.

Bryant spoke in favor of HB1803 and urged his colleagues to spend time reading and understanding the proposed measures.

"I don't want this to be a partisan issue. The laws that we have in place obviously got Republicans into power in this Legislature," Bryant said.

The bills go to the Senate for further action.

On the other side of the state Capitol, the Senate voted 27-7 to approve Senate Bill 486 by Sen. Kim Hammer, R-Benton, sending the measure to the House.

The bill would bar people from entering or remaining in an area within 100 feet of the entrance to a voting site while voting is taking place except for a person entering or leaving the building for "lawful purposes."

Hammer said his bill would establish a 100-feet "safety zone" in which people would be prohibited from camping out with tables providing food and/or drinks to voters, and prevent voter intimidation. Candidates are barred from campaigning in that zone under existing law.

Sen. Clarke Tucker, D-Little Rock, said he supports preventing voters from being harassed, but the bill's language is overly broad. For example, the police would not be allowed within that 100-foot zone, he said.

Sen. Trent Garner, R-El Dorado, said that in the past election, "I saw nonpartisan people campaign directly in line multiple times under the guise of doing it" for voter education.

In other action on election-related measures, the Senate voted 27-7 to approve SB487 by Hammer that would make establishing polling sites solely the duty of the county election commissioners, and voted 28-5 to approve Senate Bill 488 that would amend the Arkansas Freedom of Information Act to exempt ballots from records that can be disclosed to the public. The bills go to the House for further action.

On Thursday morning, the Joint Budget Committee's Special Language Subcommittee voted to add an amendment proposed by Sen. Mark Johnson, R-Ferndale, to the state Board of Election Commissioners' appropriation for fiscal 2022, House Bill 1081.

Under Johnson's amendment, if the board determines that a county refuses to pay expenses for an election, the board's director may, with a majority vote of the board, contact the state's chief fiscal officer for approval to have general revenue turnback funds that were designated to be distributed to the county to be transferred to be used exclusively for the board's county election expenses appropriation.

Johnson said his amendment would allow the state Board of Election Commissioners to carry out an election "where there has been a problem in a county."

"The cash flow to do this would come out of the Budget Stabilization Trust Fund and would ensure there wouldn't be any shortfall until it was reimbursed," he said.